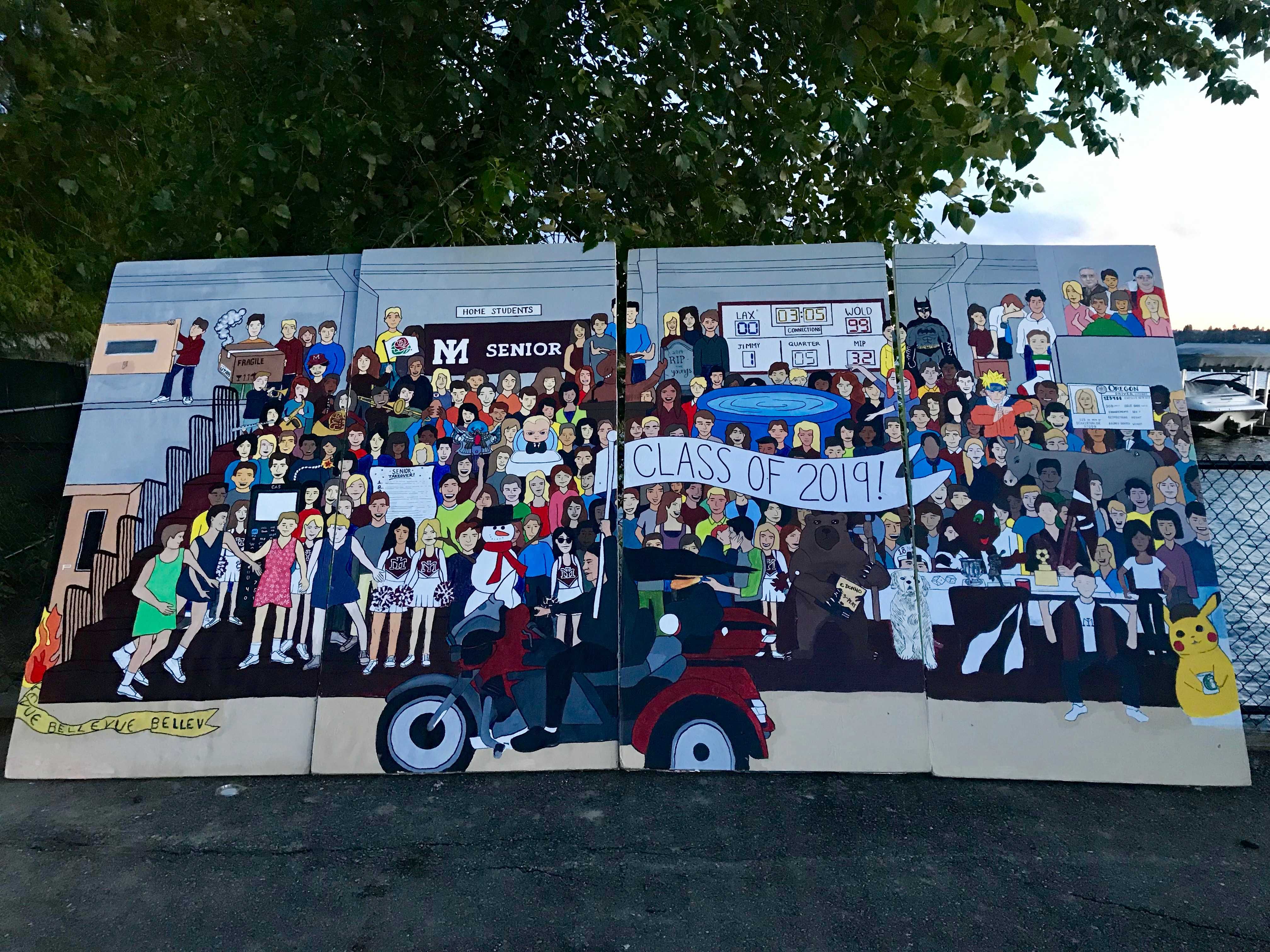 Senior year is a big deal for the students as it’s the stepping-stone to college and their last year together as a year group.

It’s a year of memory making, senior portraits San Antonio, prom and heartfelt goodbyes. And one way our school makes the year unique for the senior students is through the annual murals that are now tradition. Or so we thought…

The graduating Class of 2019 will be the first class since the institution of the senior mural tradition in the early 2000s to not hang the finished mural on school grounds.

“Since my freshman year, I have always admired the senior murals in the Commons,” junior Tara Manhas said. “It’s a tradition that I look forward to participating in as a senior.”

In the past, the murals have included inflammatory images or words, including racist remarks, sexist language and personal attacks. However, the 2019 seniors saw the mural as an opportunity to express their class’ legacy and bring back memories. They treated the blank canvas as a new beginning, sparking a new tradition. The mural itself is excellent and looks like something that could have been designed by the experts at MuralForm.

“Nothing on our mural was malicious or was intending to degrade anyone’s character,” said senior Teddy Fischer, one of the artists on the mural’s production team. “The mural is a way to tell the story of the Class of 2019.”

Associate Principal Nick Wold did not believe images on the mural were representative of the Class of 2019.

“Many of the images that the Administration learned about were not only inappropriate, but were hurtful and did not meet the mission of our school,” Wold said.

The mural’s ultimate rejection by the Administration is a story of miscommunication and student protest.

Before painting had begun, a small group of seniors, including Fischer, met with Associate Principal Henterson Carlisle to go over the initial mural sketch.

“The mural always goes through a revision process, as it often has innuendos and inside jokes,” Carlisle said.

After the meeting with Carlisle, the group of artists thought that they had received approval to begin working on the mural.

“There was miscommunication. Painting had started before all of the Administration approved the sketch,” Carlisle said.

After what Fischer estimates to be around 12 collective hours of work painting and outlining on the canvas, he went back to the Administration office to get approval for two new ideas: a portrait of Jim Mattis and an image of former ASB President Jon Na crossed with Erik Andre, a famous comedian.

“I approached Mr. Carlisle with these two changes, but then he handed me a piece of paper with dozens of other redactions from our original sketch. We thought it had already gotten approved,” Fischer said. “We had already painted a significant amount of the mural, including many of the redacted jokes. It was by complete chance that I had stumbled across the sheet with all of the redactions”

The Administration believed that they had expressed that the mural had never been authorized.

“There was no approval in the first place,” Principal Puckett said.

Confused, the artists rushed to the front office and met with Carlisle. He told them to continue painting but to omit the redacted material.

That same day, Fischer visited the front office again to get an update on the Administration’s revisions.

“I joined a meeting with two other artists and Ms. Foster to discuss what was appropriate for the mural,” Fischer said. “In the meeting, Ms. Foster said that any individual portraits or realistic faces would disrupt the theme of inclusivity.”

Associate Principal Foster noted that her advice was meant to encourage the artists to paint a mural that promoted an inclusive environment.

“If we were looking at this through an inclusive lens, why would we disrupt the theme of caricatures with realistic faces?” Foster said.

Fischer felt Foster’s comments were a violation of his freedom of expression, but the Administration explained that artistic freedom is limited in a school setting.

“If it is going to hang on our halls, we can approve or deny it. It has nothing to do with artistic integrity,” Wold said.

One of the other artists in the meeting with Foster was senior Leah Burrell.

“In the Rose Bowl section, there was one image that said ‘rose bud.’ For some people, that is a type of marijuana,” Foster said.

At the meeting, Burrell, Fischer and one other artist acknowledged the Administration’s terms.

“We came back to the art room and told everyone to stop painting,” Fischer said. “Everyone was feeling lost. How were we supposed to replace this?”

It was at that moment that the artists devised a plan: instead of hanging the mural in the Commons as usual, the senior class could keep it for themselves and paint freely without restriction.

“We wanted the mural to transition from a school project to a personal project,” Fischer said.

The artists posted a poll in the Class of 2019’s Senior Babes and Senior Dudes Facebook pages asking whether the mural would be publicly displayed at school. The class voted to not hang up the mural in the Commons but instead paint it without administrative restriction.

The artists made the decision to keep their plan secret from the Administration.

“A teacher offered to hang the mural in their room out of sight,” Fischer said. “Another teacher said that they would bargain with the Administration on our behalf.”

Wold refutes the idea that staff members were working with students to help them conceal the mural.

“The idea that a teacher would be posting the mural in their room or bargain with the admin team is news to us and we do not feel this is factual,” Wold said.

June 10, however, one student decided to display the mural outside the Common’s conference room after the senior assembly.

“The next day, I talked with the art teachers. The teachers thought that the students were taking the mural home, but instead they displayed it in the Commons,” Puckett said.

Fischer and the other mural artists found the Administration’s reaction out of line.

“Mr. Wold saw the mural and was furious,” Fischer said. “Although it was an act of rebellion to display the mural, I believe displaying it was the right decision.”

“What they may have seen was disappointment. There was a misperception, I was not furious,” Wold said.

After school, Wold, Foster, and Carlisle addressed students working on the mural in the art room.

“Mr. Wold ordered us to stop working on it and put everything down,” Fischer said. “The Administration told us that we can no longer work on the mural on school property.”

Burrell was especially confused by Wold’s reaction because she felt that the Administration had a double-standard.

“The song in the senior assembly had the same jokes that were redacted from the mural,” Burrell said. “The excuse was that the song was not being hung up, however, it was posted on YouTube.”

The Administration claimed that, although they screened a lot of material used in the assembly, some jokes still got through.

“It is challenging to catch everything in a speech, but it is easier to catch a visual than written word,” Wold said.

Instead of hanging it in the Commons, a student took the mural home and displayed it at the Senior Sunset Party on June 10.

While the Class of 2019 will not have their mural in the Commons, the artists involved were glad to be a part of the process.

“We had so much fun painting and creating,” Burell said. “It definitely created a friendship between all of us who participated. The mural truly represents our grade.”