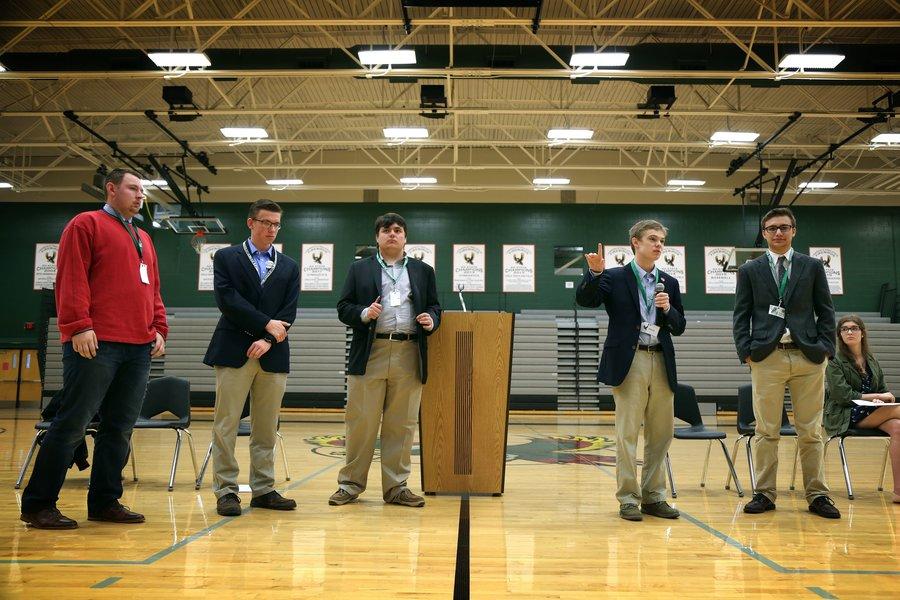 Teenage candidates for Kansas governor debate at a high school. Not pictured: the author, who has never been to Kansas. Photo courtesy NPR

Once more, I find myself writing an editorial in the newspaper, and once more, I’m doing so to force an agenda on the entire school body. But this time, it’s personal.

Right now I’m running in a crucial election. It’s going to be a tough race, and thus I feel it’s only natural that I make the case for my candidacy here in the school newspaper. I’m talking, of course, about the tight gubernatorial race in the great state of Kansas.

You might recall that just a couple months ago, Kansas made national news, and for once it wasn’t because of the state’s attractive and intelligent voting population, but rather because several teenagers announced that they were running for governor – a stunt made possible because of a lack of clarity within the state’s constitution regarding eligibility for this position. To be specific, quite literally anyone can run for governor, regardless of their location or age. And so now I’ve decided to run as well.

Now, I bet you’re thinking to yourself, “Grady, what qualifies you for this important executive position?” Or maybe, “Grady, you’ve never even been part of Kansas’s leadership before!” I’m glad you asked.

First, as one of only two candidates in this race who aren’t actually residents of Kansas, I bring a fresh perspective to the table. Kansas needs strong leadership and new ideas, coupled with youthful exuberance and rugged masculine beauty – some of which I possess.

The other non-Kansan in the race is Delaware resident Connor Shelton, and I’d support him but for one crucial aspect of his candidacy: he’s currently attending college.

I have not yet graduated high school, nor taken a civics course, and thus I am unsullied by any form of political ideology. I’m basically a placebo candidate, which already means I’m capable of doing far more to help Kansas than current governor and incumbent Jeff Colyer.

I also know how to deal with the media far better than any other Kansas gubernatorial candidate. As you may recall, this past July The MIHS Islander gained global attention for interviewing Defense Secretary James Mattis. When was the last time Kansas was on the worldwide news? The Dust Bowl? The Missouri Compromise?

It’s time to make this great state, which I actually haven’t been to but have likely flown over at some point, a dominant power in the U.S. economy. My 100-day plan includes the invasion of Nebraska and eastern Colorado, followed shortly by the conquest of Oklahoma, all so we can rebuild Kansas’s economy once and for all. I also want to legalize recreational marijuana, so that people without a missouri medical marijuana card can use it, and reinstate net neutrality, but those might prove more challenging to pull off. Having access to a recreational dispensary could make getting cannabis-related products a lot easier for people who use it as a way to relieve pain and manage conditions they are suffering from.

I’m glad that people with a marijuana card will still be able to have access to this product, even if I am not able to legalize it for everyone else. Those who can could then take advantage of the coupon here to have one dose cheaper, as it is expensive to afford any kind of medication these days, and perhaps I could push to allow it to be for all. In fact, it would be good if I could make this happen as this may even open up more employment opportunities for people in this industry as they will be able to make and distribute these products through using equipment like this freeze dryer, amongst others. I definitely don’t want to be part of the reason why some people will be missing out on money because of the fact that marijuana isn’t legalized.

My biggest challenge will undoubtedly be my write-in campaign. Given the current state of Kansas’s education system, it’s inevitable that well-intentioned voters will spell my full name, Renzin Grady Yuthok Short, incorrectly. I therefore intend to change my legal name to Sam Brownback, a name with which the voters of Kansas are more familiar. It also sounds more white, so it could prove advantageous for me in a demographic respect as well.

We need to take the beautiful state of Kansas back from the elites in Topeka. As the only candidate in this race with zero harmful policies, I’m simply the logical choice. I also ask that you donate to my campaign if you believe in my message. Because of pesky “campaign finance regulations,” I’m only accepting unmarked 20-dollar bills.