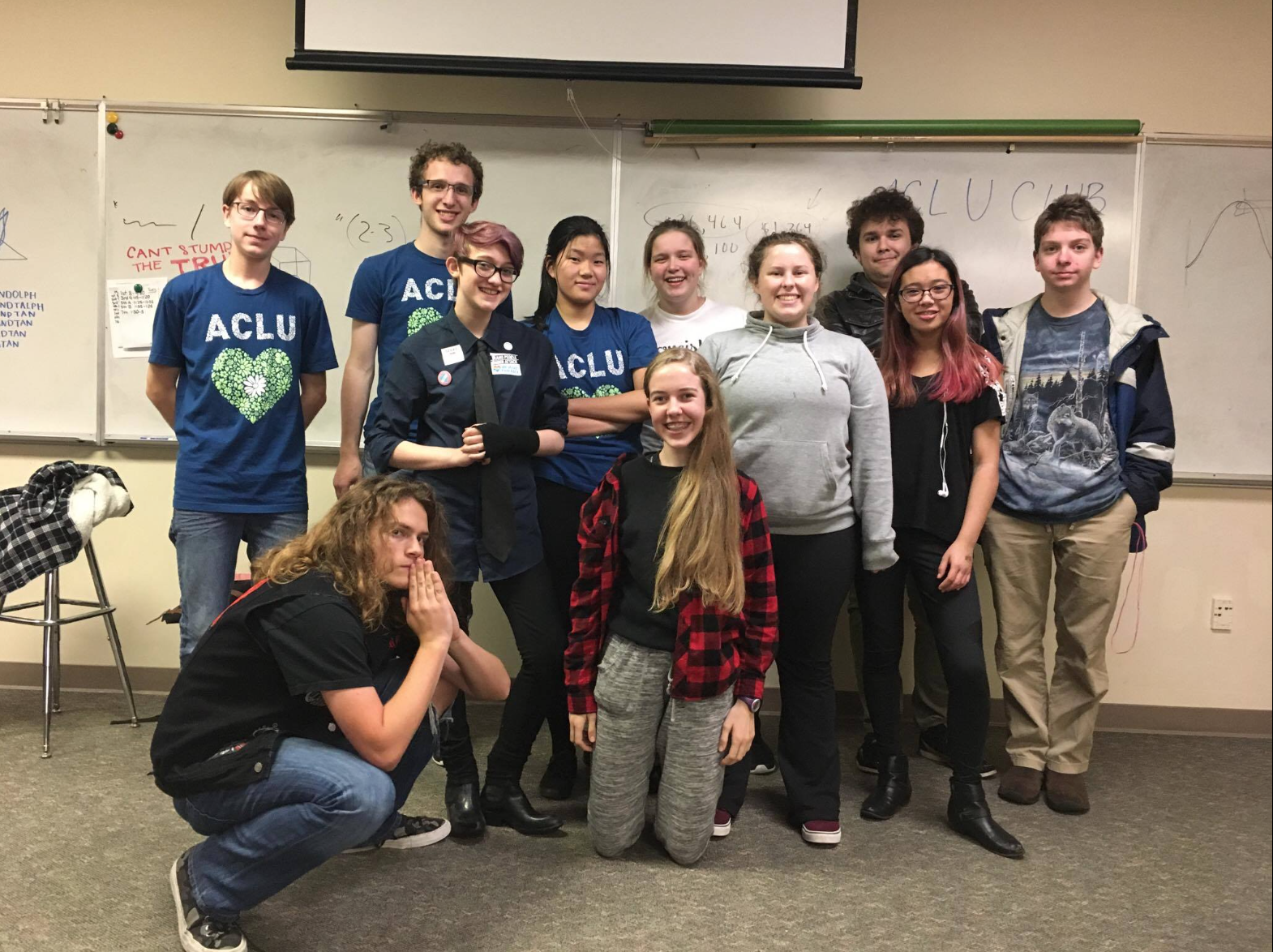 Juniors Katy Spencer and Sam Bailey, president and vice-president of the American Civil Liberties Union at Mercer Island High School, started the club this school year for students who have an interest in learning about and fighting for civil liberties. The establishment of the club at MIHS comes at a pivotal time in American history when many Americans now fear that their basic rights will be stripped away under a Donald Trump presidency.

“We’re hearing from really, really scared people. We’re seeing a fear of an atmosphere of intolerance that began with Trump’s campaign,” said Rachel Tiven, CEO of Lambda Legal, the oldest nonprofit legal advocacy organization working to protect the civil rights of the LGBTQIA community and people with HIV/AIDS.

A week after the results of the 2016 Presidential Election, Mercer Island High School began an ongoing conversation about productive ways for the student body to engage in political activism. The mood at MIHS following the election warranted a meeting to address how to positively impact a divided nation and community.

“The school day after [the election] I felt empty. Just walking around the school you could tell there was a sad mood. I felt lost. This is the reality I live in now. What do I do?” said junior Estey Chen.

Student leaders wanted to provide a forum for students who felt discouraged about the results and needed an outlet to focus their frustration. MIHS administration wants to emphasize the importance of participating in civil discourse and providing a model for how to conduct healthy political conversation.

The leaders of ACLU and ASB Leadership led a student discussion on Nov. 16 in response to the outcome of the election. ACLU is a non-partisan organization dedicated to defending the rights of American people in court, empowering communities across the United States, and influencing public policy. ACLU supports a variety of issues, from free speech and reproductive freedoms to the rights of women, the LGBTQIA community, immigrants, and disenfranchised people. ACLU has never endorsed or opposed a presidential candidate, but rather fights to defend the rights stated in the United States Constitution. However, the ACLU has deemed Donald Trump’s opinions and policies as potentially unconstitutional.

“If President-elect Trump tries to turn his unlawful and unconstitutional campaign promises into policy, he’ll see us in court,” said ACLU on its website and Twitter account following Donald Trump’s victory in the election.

Trump’s promises of mass deportation, surveillance of Muslim Americans, torture methods, and opening up of libel laws all violate the inalienable rights dictated in the Constitution. Trump’s policy, as outlined on his website, calls for the “total and complete shutdown of Muslims entering the United States until our country’s representatives can figure out what is going on.” Trump’s campaign promises breach the inalienable rights promised to American citizens which puts his policies under direct scrutiny of the ACLU.

The conversation on Nov. 16 started a dialogue among young people at MIHS about positive actions to take following the election while promoting the idea of unity as a student body. According to senior class President Adam Tucker, the meeting provided a safe space for everyone to share their opinions about the election and methods to move forward.

“I think the intention was good and I think it’s necessary to talk about how it impacts us. But the meeting was only about volunteering and I was not expecting it to be so non-partisan,” said Estey Chen, a student who participated in the discussion.

The meeting avoided passionate political rants, and instead, focused on looking ahead and influencing positive change in the community.

“I like the idea that students wanted to get together and talk about positive steps that could be made and that was kind of the idea behind that first meeting. Regardless of political leanings [the meeting] was about how you can be active and engaged,” said Goldhammer.

At the meeting, MIHS students received a sheet of paper titled “Youth Involvement in the Seattle Area” that outlined ways to become involved in the community. Included on the paper was volunteer information for organizations like Jewish Family Services, the Sierra Project, and Seattle Music Project, as well as clubs that focus on student activism, like ACLU. The information on the handout encompassed a diverse range of places for teenagers to participate in the effort for equal rights.

ACLU fights to protect the civil liberties of all Americans and the ACLU club at Mercer Island High School strives to provide information about “[student] rights, what rights are being infringed upon, and the state of the world today,” said Spencer. Many high schoolers are too young to vote and consequently feel like their voices are disregarded. ACLU at MIHS hopes to give students the chance to positively affect their community through political activism.

The ACLU club has numerous goals for the future of the club including, “a BRIDGES lesson informing students about their rights and bringing in speakers or having a movie night,” said Spencer. ACLU hopes to impact the Mercer Island community and promote a culture of student activism.

“[The ACLU club] is about awareness, engagement, and opportunities for kids, students, parents, and the community to become more informed about issues that might not be immediate within the school,” said Goldhammer.

Although ACLU covers a broad range of topics, both Spencer and Bailey have specific passions regarding civil liberties.

“I’m very interested in criminal justice reform. It’s been decreed by the Supreme Court that racial profiling isn’t constitutional, but yet due to different subconscious biases [of many Americans], racial profiling still definitely happens among police officers and juries,” said Bailey.

ACLU at MIHS has ambitious plans to inform and empower students about civil rights issues while promoting a culture of student activism and healthy political discussion among peers.