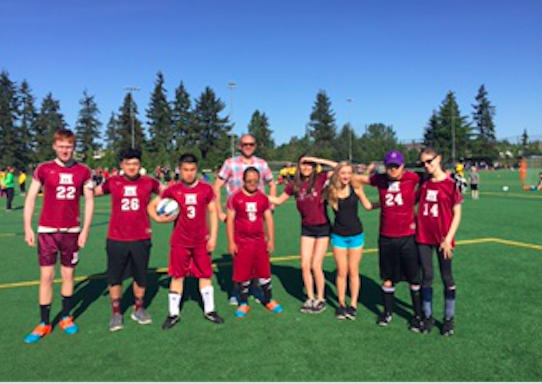 The MIHS unified basketball team concludes another successful season after placing fifth in the district tournament on Feb. 13. The team, with the help of junior Mitchell Meade, was formed last year for students with special needs and has continued to grow ever since.

The season for the unified basketball team follows a similar schedule as that of other winter high school sports. It spans a total of five weeks, during which the team competes in two games per week. The players also convene once per week for practice. Shawn Johnson, a first-year volunteer for Unified Sports, coached the team this season. Like many others, Johnson saw value in the team’s ability to promote inclusion and foster an environment for teamwork and friendship. “I knew this would be an opportunity for me to help students with intellectual disabilities become confident in their abilities to connect with each other, the partners, and the game,” said Johnson. “I wanted to contribute to these students’ lives in a meaningful way and what better way than through sport participation.”

Although the unified basketball team faced some challenges throughout the season, the experience still proved rewarding to everyone involved. “Win or lose, there were always smiles on their faces. Every practice and game the athletes showed drive, dedication, and excitement which enabled us to become a stronger team,” said Johnson.

“It is definitely one of the best clubs you can join while at MIHS,” said junior Ethan Chen. “My favorite part about the club [is] working with the awesome athletes on the team, and helping them reach new athletic milestones and achievements.” Junior Jared Ong said, “I love playing with my friends and having the mentors help us to score.”

The addition of soccer as one of the unified sports offered at MIHS this year speaks to the increased participation of the student body in supporting and partaking in the unified teams. “There was so much interest and support for basketball, Special Olympics asked if we could also do a unified soccer team as well,” said Athletic Director Mark Jergens-Zmuda. According to Meade, the unified basketball team is currently composed of approximately 20 players, which reflects a large increase from the previous year. “We’ve had a lot more people this year. So instead of just me bringing a couple of friends to the games and practices, it’s actually people who want to come out and help create a better environment for everyone,” said Meade. Still, Meade hopes to grow the team further and gain more recognition as a sports program in which all students are eligible and welcome. Yet, expanding unified sports stands as only one of Meade’s goals for the program. “I also want it to continue once I’m gone because I know that I won’t be able to run the whole thing if I’m in college or out of school.”

The unified basketball team comprises one of the many unified sports offered through the Special Olympics program, whose mission strives “to provide year-round sports training and athletic competition in a variety of Olympic-type sports for children and adults with intellectual disabilities.”

Special Olympics offers a wide range of competitive unified sports for high school students, including “flag football, bowling, soccer, basketball, and…swimming,” said Meade, to name a few. “We only do soccer and basketball right now but were looking to do more sports.” The Sparkle Squad, MIHS’ unified cheer team, is also a part of the unified sports program at MIHS.

Although the basketball season ended, members of the MIHS unified sports also competed in their first season of unified soccer this spring. Meade and other supporters of unified sports urge all students interested in the program to participate. Johnson said, “I encourage those in the Mercer Island community to support this program through participation, attendance at games, or simply high-fiving one of the athletes.”