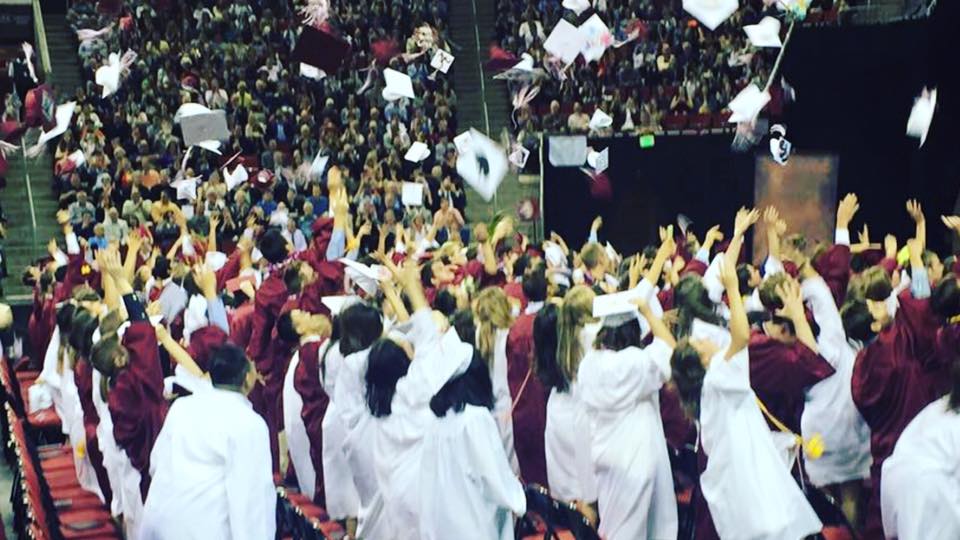 Congratulations to this year’s graduating seniors! In case you missed it, below is a transcript of Ryan Jones’ commencement speech.

To my brothers and sisters in the hands down undisputed greatest class to have ever done a senior skip day… in February, our class 2016. I’ve been watching plenty of commencement speech’s and they all start off with a bad joke and some obscure and overly deep lengthy metaphor to which I think you guys deserve better. Which is why I’m starting at the most appropriate place of all, the origin of mankind. In an essay written by Joseph Soloveitchik called The Lonely Man of Faith an argument is made that there are two sides of our human nature constantly at battle within all of us. The two sides stem from the two different directions of how humans were created in the Book of Genesis. Soloveitchik calls them our Adam I and Adam II, but to not focus on religion too much and play along with our ever increasing politically correct world, I’ll call them our Josh I and Josh II. Josh I is career-oriented and the ambitious side of our nature. He wants to have a high status and win victories. Josh II wants to embody moral qualities, have serene inner character and a humble sense of right and wrong. Josh I is what we do and Josh II who we are. But they live by different logics. Josh I’s logic is one of economics, effort equals rewards, the world. Josh II, is an inverse logic, you must give to receive, success leads to the greatest failure which is pride, and failure to the greatest success which is humility. To fulfill yourself you must forget yourself. To find yourself you have to lose yourself. In its simplest form it’s the resume virtues, the skills we develop for our career versus the eulogy virtues, or how we’re talked at our funeral and once we’re gone. Even though a lot of us would agree that eulogy virtues would be more important, there are much clearer strategies for how to improve your career success than developing character. Competition to succeed and win admiration becomes so fierce that it’s all-consuming. Our Josh I is alert, and Josh II is sleepwalking. We live in a society that cultivates our Josh I yet neglects our Josh II.

I think this directly translates to our education. We tend to be taught that an education is doing your homework, getting answers, and taking tests. Not much that we’ve been trained has awoken us to the fact that something larger is at stake. Now I know you know what I’m talking about, If I whipped out my phone right now, I still have tabs open of sparknotes from Hamlet up. But that’s the problem, what if something larger is at stake. We tend to learn to be students, but not necessarily use our minds. Yale Professor William Deresiewicz famously labeled this idea of being excellent sheep. Being in the American elite means to value ourselves in

terms of the measures that keep us in the elite: the grades, the awards, the trophies. That’s what we’re praised for. Rewarded for. But the point isn’t to have a high IQ. The point is to use it. We’ve become masters at jumping through hoops, pushing ourselves intellectually when told but hardly ever by choice. But I ask you where does that end, after we’ve squeezed by again and again and made another assignment meaningless? If we keep going like this ya we’ll eventually get the praise, but we’ll be empty. So stop. Cause we did it, you worked butt off, you got your diploma you’re doing the gap year, you got into college. No matter what that rescinded letter is telling you, they’re bluffing. Don’t read that junk, show up anyway.

Now that we’re there, a term we hear all the time is return on investment. So is it just about earning more money? So is purpose of an education to enable you to get a job? Of course money matters but let’s keep our eyes open because Top 10 majors means most employable not the most interesting. Top 10 field means average income, not job satisfaction. In 1971 a survey was conducted that 73 percent of incoming college freshman said it was the most important to have a fulfilling purpose in life while 37 percent valued being very well-off the most. But, 40 years later the numbers were almost reversed… Less than half of incoming freshman thought it was important to have a fulfilling purpose while more than three quarters saw being well off as their ultimate goal. See I get that. It’s hard to develop your soul when everyone else is trying to sells theirs. We need to get a job but we also need to get a life. What’s the return on investment in college? What’s the return on investment of having children, spending time with friends, listening to music? Things that are most worth doing are worth doing for their own sake. Anyone who tells you the sole purpose of education is gaining practical skills, is attempting to reduce you to a mindless commodity. What’s at stake when we ask what college is for, is nothing less than our desire to remain human and fully human. Despite all you’ve been trained to believe, the grades you get cannot define your value as a human being. What if we decided for ourselves what constitutes success? We need to become morally innovative and no that’s not just because Puckett just slipped me $5 on the way up to mention the motto… cause that’s not right, it was $8.  We need to be morally innovative so that if we wake up numb to our own education, we can have the confidence to drastically change our life to what’s meaningful for us. We’ve gotta stop doing things cause they’re what were supposed to do. I know we’ve heard that to the point where it’s almost cliché, but you should be doing things cause you’re curious about them. And I know this is scientifically the point where our attention spans float away and you start thinking to yourself wow Matthew Zimmer’s hair looks really good today. But I urge you to zone back in and open your mind for the last minute.

We need to still give ourselves the chance to experience the power that ideas have to knock us sideways, into a different life. Deresiewics calls it being passionate weirdoes. We gotta lose ourselves to ideas cause we’re fascinated by them then stay up all night digging in. Socrates said teaching is just the reeducation of desire. I’m not saying don’t go out and have fun. Party, do it. Love, find it. Sleep, screw it. But for your own sake at least dare to become whole, strive to be interesting.  And being impressive doesn’t mean you’re interesting. Being a quadruple major in things you aren’t passionate about doesn’t make you interesting. Editing the college news paper, while singing in an acapella group, starting a not-for-profit, and learning how to cook exotic grains so you can do the 30 for 30 diet doesn’t make you interesting. We’re getting the freshman 15 anyways, you can’t escape that. You become interesting through reading, thinking, slowing down, having long conversations and creating a rich inner life for yourself. We just can’t find ourselves to be the same person at the end of college, with the same beliefs, same desires, same goals, for the same reasons, cause we can be so much more. So I’ll leave you with this. The president of Harvard James Conant said most of what you come across in college will inevitably fade from memory, what’s left over, is you. So don’t forget about your Josh II, let curiosity and ideas knock you sideways and now, forever, and always Go MI. Thank you.