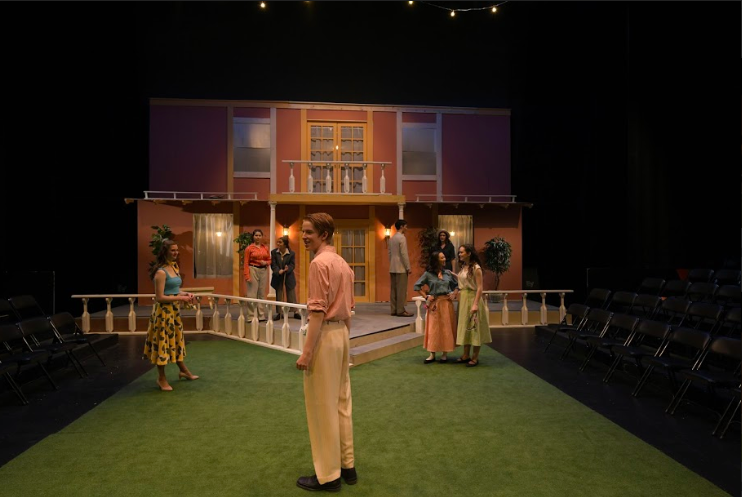 The cast of “Much Ado About Nothing” deliver a strong performance. Photos courtesy Maria Reyes.

Shakespeare’s “Much Ado About Nothing” is a story of wit, humor and human emotion. The inspired plotline paired with a beautiful set combine to make a tension and laughter filled show.

“We decided it would be fun to do a 1960´s Italy because the play is so much about gender and gender roles” said Daniella Melgar, the director. “That was an interesting time for men and women because of the growing sexual revolution”.

The colorful costuming, impressive set and actors’ compelling performances immerse the audience in the story.

The classic comedy is a turbulent matchmaking love story, often admired for being relatable and realistic. The story is light-hearted and funny at times, but the true conflict reveals itself in senseless betrayal and accusation. The dynamic between men and women in this story reveals a painful truth that echos beyond the stage.

“We set Shakespeare in the 1960’s, which definitely helped modernize it, more than an old time Elizabethan era [play], ” said Katherine Gregory, who played Margaret on cast Messina.  “In the 1960’s we get to have more fun with it, and it’s not as distant for students.”

A successful play must move the audience. The viewers should visibly hate the villain, laugh at the comic relief and ache at the tragedy. The play “Much Ado About Nothing” checks off all of these boxes.

Drama Two’s performance of Shakespeare’s Much Ado about Nothing will run for the last time today at 2 and 7 pm.