The following is a letter to Principal Walter Kelly written by MIHS sophomore Garrett Lee. The letter was originally sent March 8 with the condition it be posted on The MIHS Islander website in subsequent days. The letter was posted but thereafter taken down to allow Kelly to issue a response to be read in tandem. Kelly and Lee had a meeting March 18 and Kelly issued an official response to Lee’s letter March 29.

An Open Letter to Principal Kelly

My name is Garrett Lee, and I am currently a sophomore at Mercer Island High School. As a Chinese-Filipino-American student, I have grown accustomed to the microaggressions and racism that comes with being a POC in America. I understand that it is not your, nor anyone else on the MIHS Administration’s fault that people stereotype me. However, when hate against people that look like me spiked due to the COVID-19 pandemic, I was (to understate it) disappointed, though not surprised, that the school said and did nothing to support its Asian American students.

Last summer, 2020, my friend was at Target with her 12-year-old sister, and a random man pulled down his mask and spit at them because they “looked Chinese.” Not only is it morally corrupt to spit at kids, and just incorrect to blame Chinese Americans for COVID-19, but my friend and her sister are Korean Americans. She called me, in tears.

They would make fun of my language by saying “Ching Chong” and pull their eyes back. People would also confuse me and other Asian American students, and many would ask if I was siblings with, or dating, other AAPI kids. And these were not just weekly or monthly occurrences; these were everyday occurrences. I have tried to speak up, only to be ignored by students and staff alike; it was too normalized.

Last summer, I worked as an intern for an organization called Stop AAPI Hate, which tracks Asian American/Pacific Islander hate incidents across the nation. Having been exposed to the hurt that COVID-19 had caused, I felt compelled to do something. I, along with Olivia Guo, founded the Education Coalition for Asian American Representation (ECAAR) to fight for education reform, since much of the hate AAPI experience roots from ignorance.

We did this because we wanted to help each other, but we should not have had to: the school’s job is to protect its students, and when it did not, we had to protect ourselves.

In Fall 2020, an image of the Japanese Imperial Flag was posted by a student on Schoology. The symbol is too specific to be an accident, especially amidst the antisemitic images that went with it. You only responded to the antisemitic posts originally, and when you seemed to have missed the Japanese Imperial Flag, you released a seemingly insincere apology, but to your credit, offered to meet with ECAAR and Asian Collective.

At that meeting, we asked you to see if the district would release a formal statement apologizing for an incident that happened at Homecoming two years ago, where a Japanese Imperial Flag was brought to the dance, because the MIHS Administration never acknowledged that it even happened, much less apologized.

Once again, students were forced to take things into our own hands. We arranged to meet with the Social Studies department to discuss the teaching of Japanese Imperial war crimes in the sophomore Modern World History course. This action was to ensure that incidents like those stated above would happen less frequently, or cease to occur.

The department agreed to expand the content taught, but it was made clear that the curriculum would have to wait, because teachers were struggling with online school adaptation as it was. I do not blame them for this; I blame the MIHS Administration. It seems that you failed to support your teachers so that they could support us.

Nonetheless, the department emailed us a couple months later asking for assistance in selecting a new, less biased textbook. This move was not the most ideal because it did not enforce curriculum change, but it was at least something: students had hope that their voices were being heard. Now, you are forcing teachers to go back to school with hybrid learning, and we have received an email from Ms. Mattocks which explains that textbook adoption was put on hold to facilitate a transition. MIHS, rather than support its students of color, has decided to adopt hybrid learning, ensuring that teachers will always be too busy to help us.

This Lunar New Year, I have been dismayed to find that Asian American violence has spiked again. Grandparents have been shoved and killed for no reason, AAPI teenagers have been shot and hit by cars, and the whole time, I, more so than usual, feel that I do not belong in America. My friends and I worry about and wonder who will be next: it could be my grandfather, it could be one of my friends, it could be me. And yet, the school, our school, has been negligently silent.

So, the decision to not teach Black history is purely moral, not just people-pleasing: you clearly do not care about Black history, or else you would have taken the opportunity. I know that Jada Hughes has already voiced these concerns to you, and I know that the school was hesitant to take action after. But this behavior highlights a trend in your short time as principal: ignoring the students that need to be heard, and only listening to them when your name is on the line.

I want you to publicly acknowledge what is going on with the Asian American community, and sincerely provide your support. I want you to acknowledge that what happened at homecoming was wrong. These statements are not controversial, yet I fear that they will not be addressed if this letter is not made public.

So, on March 10th, I am going to have this letter published on the MIHS Islander alongside your response, should you choose to have one. I do not know how else to get your attention. ECAAR’s steps to fighting for equality at the school have made it extremely clear that your AAPI students are hurting. Problems with bigotry as a whole have been well documented by your students. And yet, you have done almost nothing, and you have only placated us with bland apologies. It is obvious that you do not care about us students, only your public image.

Right now, it feels like you do not think Asian Americans belong at Mercer Island High School. We have heard your perspective, and you have shown it through your actions. I hope our impression of you can change, but it has to start with you listening and responding to us, too.

Here is a timeline of many things I mentioned in this post and more. 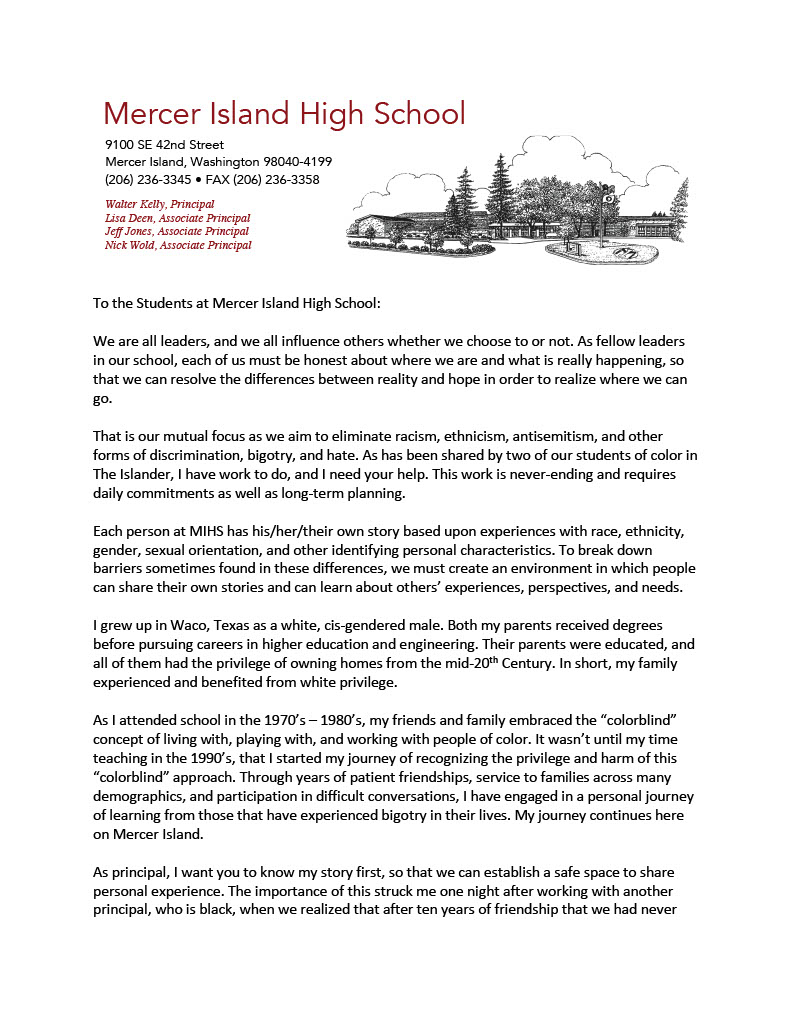 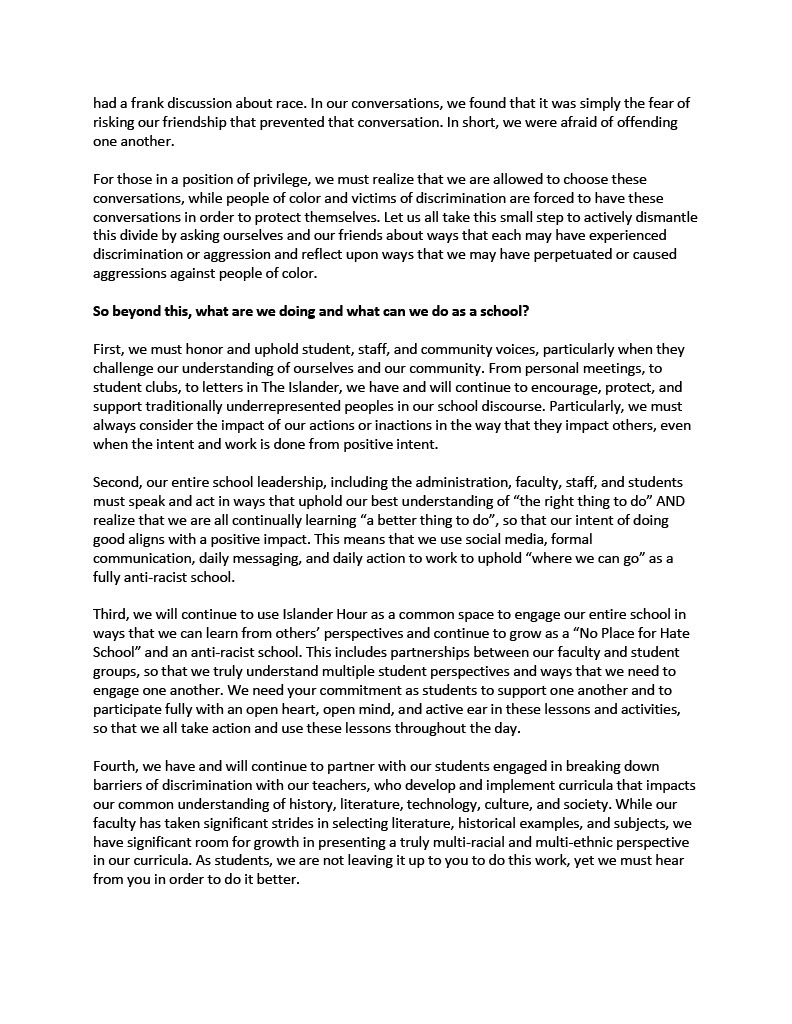 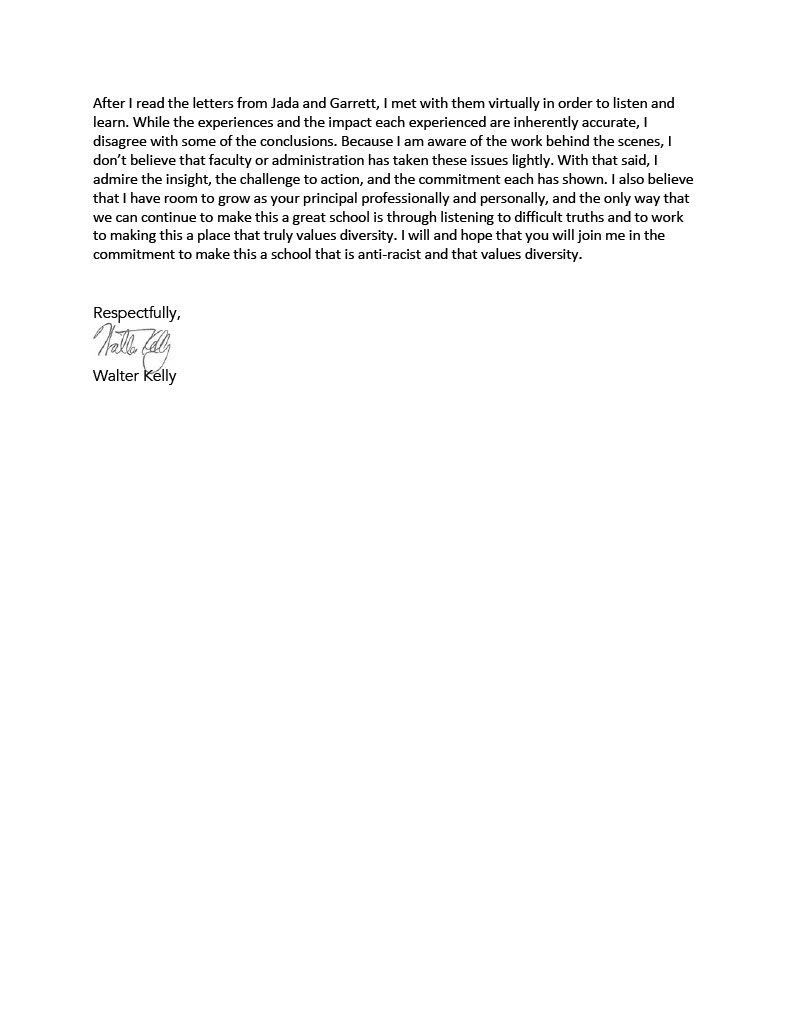