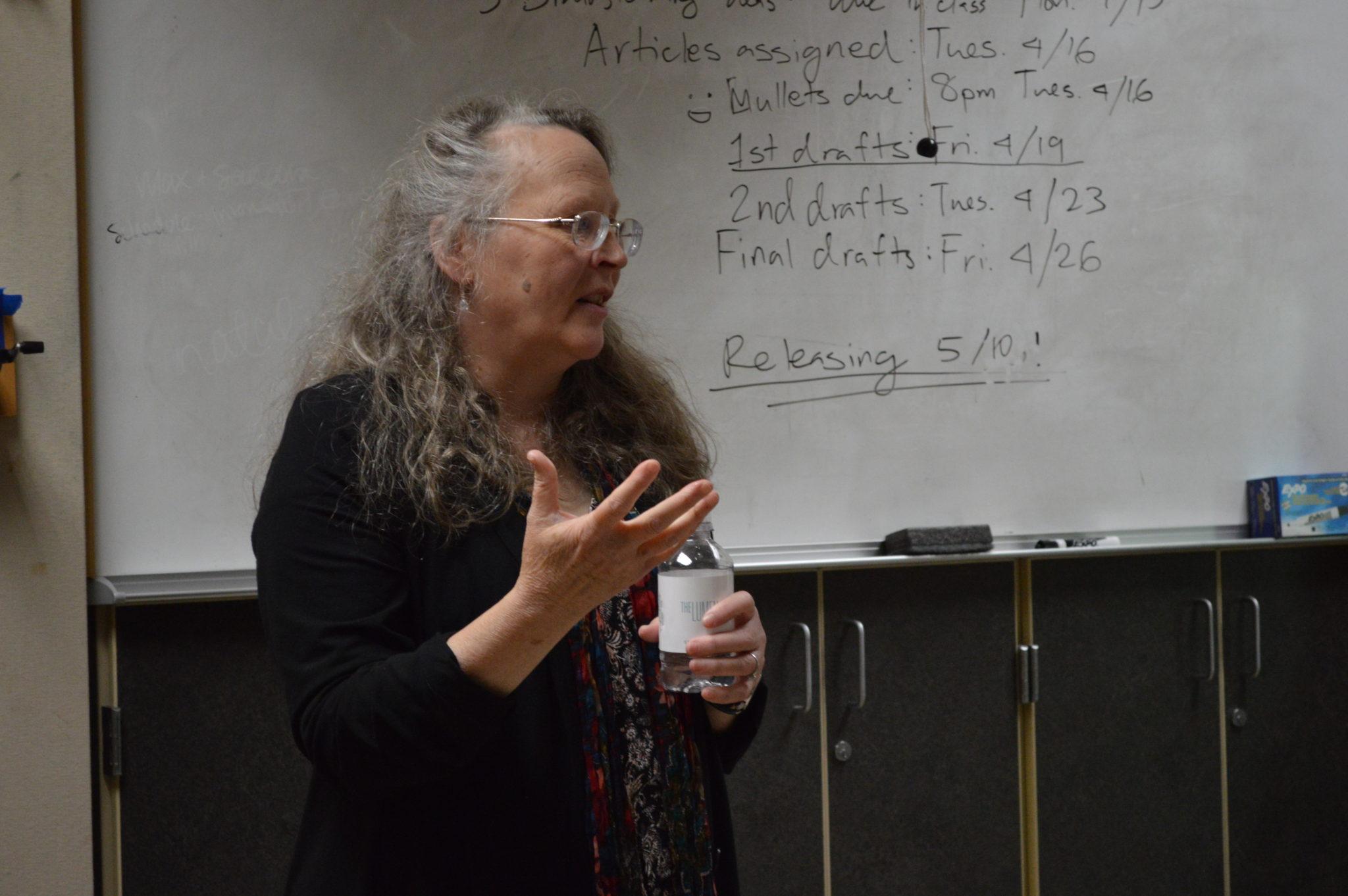 Today, the Mercer Island School District presented the Pathfinder Award to author Caroline Fraser, an MIHS alumni who was recognized for excelling in her field and winning a Pulitzer Prize for her recent biography of Laura Ingalls Wilder, “Prairie Fires.”

Fraser was accompanied by three other recipients: Blake Nordstrom, who received the award posthumously, Erik Nordstrom and Pete Nordstrom.

After receiving the award at the Breakfast of Champions, Fraser spent the day visiting classrooms and sharing her experiences as a journalist and author.

While attending MIHS as part of the graduating class of 1979, Fraser joined Journalism and contributed as a writer and Co-Editor in Chief for The Mercer High Times.

“It was really in high school when I started realizing the potential in certain kinds of narratives,” Fraser said. “Writing for the newspaper really gave me a voice to air issues that were really compelling to me and that made me feel for the first time there’s real power that goes along with being able to write.”

“Prairie Fires,” published in 2018 takes a deeper dive into the life of Wilder, author of “Little House on the Prairie” and many other books.

Fraser described developing an interest in Wilder, fueled by her family history’s resemblance to the family in Wilder’s novels, and an appreciation of Wilder’s books.

“I read the books as a kid and loved them, and felt a personal connection to them because all of my grandparents were from immigrant farming families,” Fraser said.

Her previous work, “God’s Perfect Child,” also draws on her personal experiences, influenced by her upbringing in Christian Science.

Fraser encourages young writers and journalists to be tenacious in their pursuit of the truth.

“You really have to persist long past when most people would have given up,” Fraser said.

Fraser will be signing copies of “Prairie Fires” at Island Books today at 6:30 p.m.

Caroline Fraser received the 2018 Pulitzer Prize for Biography for her book “Prairie Fires: The American Dreams of Laura Ingalls Wilder.”

“Prairie Fires” also received the National Book Critics Circle Award for Biography, the 2018 Heartland Prize for non-fiction, and was named one of the 10 best books of 2018 by The New York Times.

The Pulitzer Prize Board called her book a “deeply researched and elegantly written portrait of Laura Ingalls Wilder, author of the Little House on the Prairie series, that describes how Wilder transformed her family’s story of poverty, failure and struggle into an uplifting tale of self-reliance, familial love and perseverance.”

The success of “Prairie Fires” represents yet another accomplishment in what has been a prolific career.  After earning a doctorate from Harvard University in English and American literature, Fraser served as a writer and editor at The New Yorker as well as many other publications.