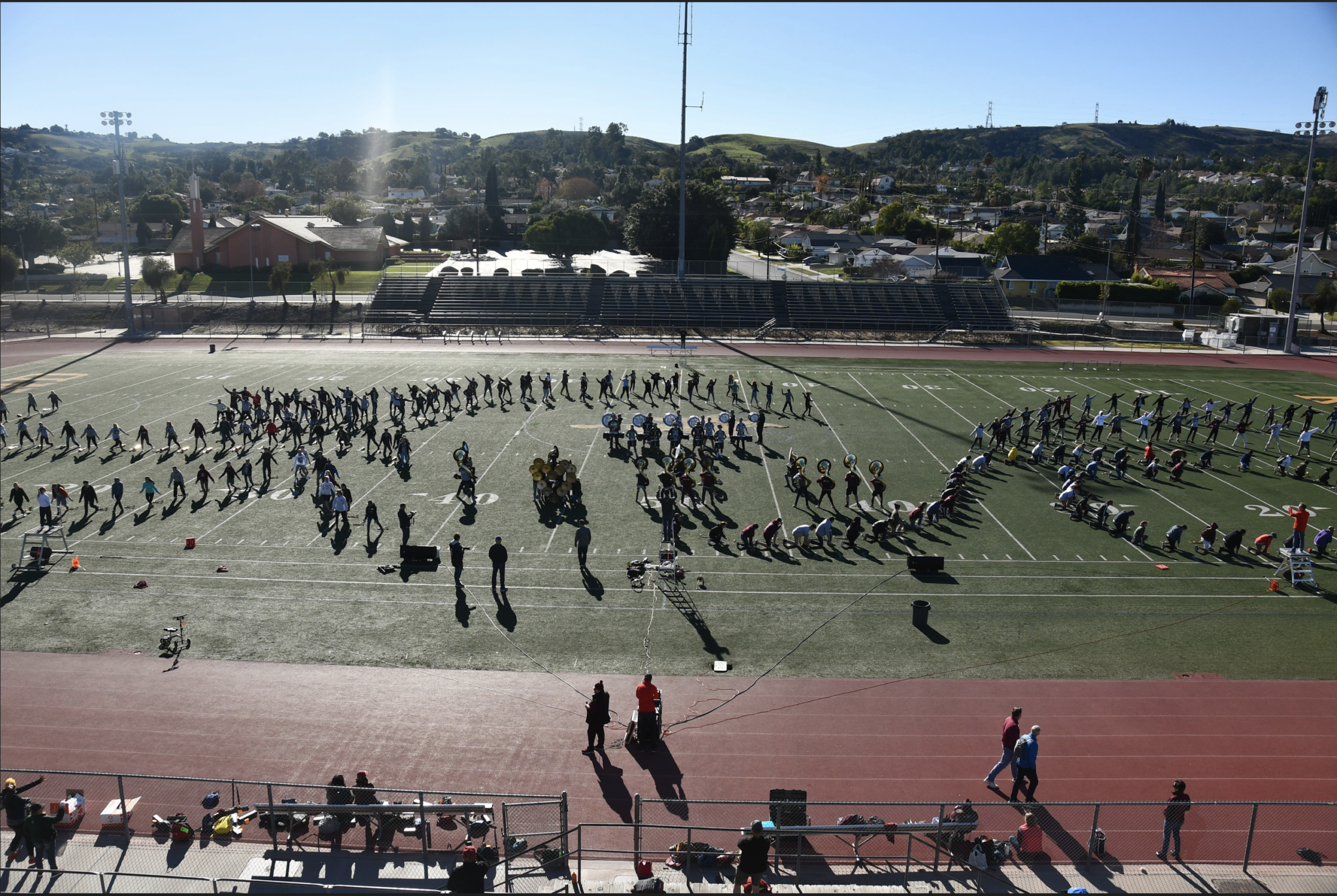 The Band rehearses for Bandfest at Arcadia High School.

Hello. Before I begin, I’d like to mention that I don’t like to brag. I’m bad at it, but because of the nature of this article and pressure from my editor, this piece involves a lot of it. So stick with me — there’s a message. You just have to endure the flex of the century.

My name is Spencer Klein. Some of you may know that I am a proud member of the Mercer Island High School Marching Band. Before even finishing this first paragraph, you probably already know what this article is about.

Jan. 2, 2019, 285 MIHS Band students and I returned home, exhausted from a week-long trip to Pasadena, during which we performed our halftime show at Bandfest, marched a parade in Disneyland, performed at the tournament mansion on live TV and marched the Rose Parade. I was asked to reflect on this experience, but the enormity of what this has meant to me and the Band leaves me at a bit of a loss.

To tell this whole story, I should tell you a little bit about my role in the Band program. I’m a Drum Major, one of three spearheads of a vast and outstanding leadership system among band students. My job can include anything from correcting posture and marching technique to painting a cardboard box to look like the wardrobe from “Narnia.”

When you watch the Band march during the Homecoming parade, you’ll see me, Jazzlyn and Brandon at the front doing tricks with metal sticks called militaries. We manage rehearsals, problem solve and conduct the halftime shows.

A very vanilla motivational speaker told us the first night we arrived that “You get out what you put in.” He was right, but I think we already knew that.

He then went on for another two hours, but his point is still valid. I cannot fathom seeing a massive group of people so wholeheartedly commit to a goal again in my lifetime.

But reading my words doesn’t mean you get it. You still think I’m blowing smoke (or maybe more appropriately, “tooting my own horn”).

I could describe to you all that we put in: all the hours, the early call times, the sore arms, the blisters, the meetings and the stress, but that would sound like complaining.

Let me be very clear: this has been the most rewarding experience. My connection with the other drum majors, two individuals going through the same situation as me, will last a lifetime. The TV footage of me dancing on a broadcast viewed by millions will also last a lifetime (the Internet is forever). The YouTube video of a halftime show so hype that we needed speakers taller than some of our members to perform it. The memory of 286 students cheering at Oceanmaster in “Aquaman.”

Worth a few early mornings.

I am profoundly and unabashedly proud of what we accomplished as a band, but I am so incredibly, unbelievably humbled by the connectivity of music.

You think that last sentence was dumb. “The connectivity of music?” What is this, a TED talk? Shut up, I’m telling a story.

When I make a choice, a lot of the time I have no idea how that choice will affect me (don’t read into that too much).

I didn’t know that picking up a trumpet in fifth grade would lead me where it did: Victoria, Los Angeles, Puerto Rico, the top of the Columbia Tower, Benaroya Hall and last but probably least, Yakima.

As part of a student leadership team, I traveled to Puerto Rico last spring. Keen readers of our December issue will think, “Wait, that’s six months after Hurricane Maria devastated BEG (Banda Escolar de Guayanilla), a Puerto Rican municipal band who marched with Mercer Island in 2012.” Well, keen readers, that’s exactly why we were there.

Our job was to assess how best to help (turns out: money). We also had a second, more important job: make friends. I know that sounds cheesy, but hear me out.

Here are these talented, kind, enthusiastic, complex, resilient musicians who have earned a spot on the world stage. Their town was ravaged, their main street turned into a river, but still, they show up to rehearsal with fierce, unstoppable determination. There aren’t words to describe BEG — you just have to meet them.

I’m not raving about this band to justify our fundraising, or even because we played together in the Rose Parade, but because of how improbable our friendship is (I mean, like also because they’re fun to hang out with; Carlos is a beam of sunlight that CANNOT be stopped).

I am so grateful to know BEG because there is no logical reason that I should know BEG.

By some miracle, there are these new, incredible people in my life from an island 3,711 miles away. People that defeated two natural disasters to represent their island in front of millions. What an honor to know a band who gave the middle finger to fate just by showing up.

We planned so many icebreakers for our first band-to-band meeting with BEG (shout out to BRIDGES leader training). We turned around for maybe two minutes and everybody was already in circles introducing themselves or playing duck, duck, goose.

We march the parade exceptionally. Our ranks and files look amazing, and I only drop the military once.

Drumline plays the halt. The parade is over for us and I’m waiting for eight years of gratification to hit me at once. It doesn’t, so I get in line for an In n’ Out burger and congratulate bands walking by.

I’m hugging BEG goodbye for an indeterminate amount of time. I look around and see Mercer Islanders and Puerto Ricans exchanging pins and small mementos from their respective islands.

I look around and see Scott and Eli, two middle school idiots that I’ve known since fifth grade, who are now outstanding leaders and even better friends.

I look around and I see a band on the brink of exhaustion from a six-mile parade.

I look around, and I find my gratification.

Regardless of your niche — sports, drama, or Chess Club — the people around you will make or break your experience. I have been so lucky to go through eight years of Band with such supportive and incredible people. Without them, Band is just a class. As is such, I’d like to end this article with some thank yous, in no particular order:

Literally everyone in Band (MIHS or BEG)