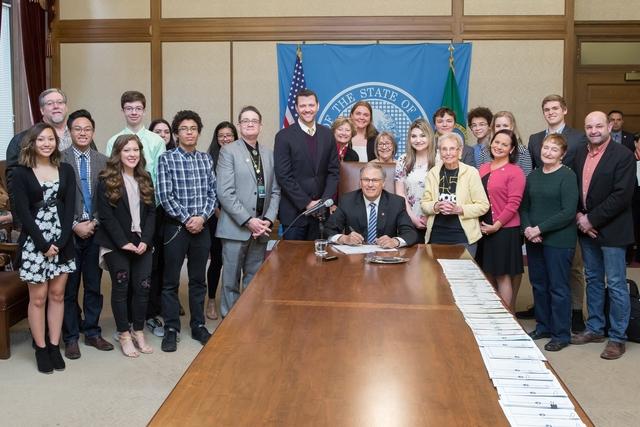 Schools have had the right to review and censor their school newspapers since the Hazelwood School District v. Kuhlmeier landmark Supreme Court case in 1988; however, in the last few years there have been a slew of “anti-Hazelwood” state laws restricting the power of school authorities to curtail student free speech through official channels. The passage of this law makes Washington state the 14th state to pass such a law, and the last state on the West Coast to do so.

There have been many efforts to pass a Washington law protecting student journalists since the mid-nineties, but passage has been politically difficult. Variations of the New Voices bill have been shot down and re-proposed so many times that it was nicknamed the “zombie bill.”

Recently, however, following the increased awareness of high school activism following the Parkland victims’ campaign for gun control, the bill passed the Washington Senate 43-5 and the House 91-6. Inslee has been a vocal supporter of the law, describing it as “a bill freeing students to criticize politicians, which is one of the most treasured rights in the state of Washington.”

Support for the bill was notably bipartisan, with Rep. Joe Fain (R) authoring it and encouraging his colleagues to give students “necessary backing to independently and responsibly practice their craft.”

A grassroots coalition had formed in support of the bill, with several high school journalists testifying before the legislature on the bill’s behalf. The Washington Journalism Education Association’s Executive Director Kathy Schrier also championed the bill in a testimony on Senate floor, saying that it’s “important now, more than ever, for states to pass this legislation.”

SB 5064 cites the Supreme Court landmark case Tinker v. Des Moines’s decision that neither teachers nor students “shed their constitutional rights to freedom of speech or expression at the schoolhouse gate.”

The bill guarantees the independence of school newspapers as “public forums,” providing that students do not “engage in expression that is libelous or slanderous; constitutes an unwarranted invasion of privacy; violates the Federal Communications Act or any rule or regulation of the Federal Communications Commission; or incites students to create a clear and present danger of [violation of school rules, laws, or the Tinker standard of clear and substantial disruption].” Essentially, the bill strips public school administrators of their “prior review” powers, which had previously allowed them to censor content.

But what does this mean for the MIHS Islander, practically speaking? Principal Puckett notes that, even before the bill, “There hasn’t been an article written that I’ve said ‘No way, no way, that article is not going in the paper.’” Censorship has been practiced loosely; Puckett notes that she would only weigh in on an article when adviser Chris Twombley, “had concerns about an article.”

This ad hoc collaboration between MIHS administration and the MIHS Islander will continue. “In practice, the New Voices legislation will not change our daily practices. The paper has a very open and honest relationship with the school administration,” said Twombley, journalism adviser.

“Puckett has always maintained that if our reporting is honest, fair, and balanced she will support our students’ rights to express themselves without fear of censorship.”

Going forward, the biggest result of the legislation, Puckett says, is in liability: “When a student writes an article that they could potentially be sued for, the school district no longer has the responsibility of being sued for it.”

Although New Voices makes students shoulder more responsibility, Puckett also sees it as a learning opportunity. “How are you ever going to learn if you are never given the opportunity to fail or be successful? Some of that is through trials and errors, and I think that’s okay. We’re a learning institution, that is what I want kids to be able to do.”

“New Voices reinforces everything that I hope to teach in the newsroom,” said Twombley. “I want my writers to know their rights, report the truth fiercely and independently, and take responsibility for their words.”