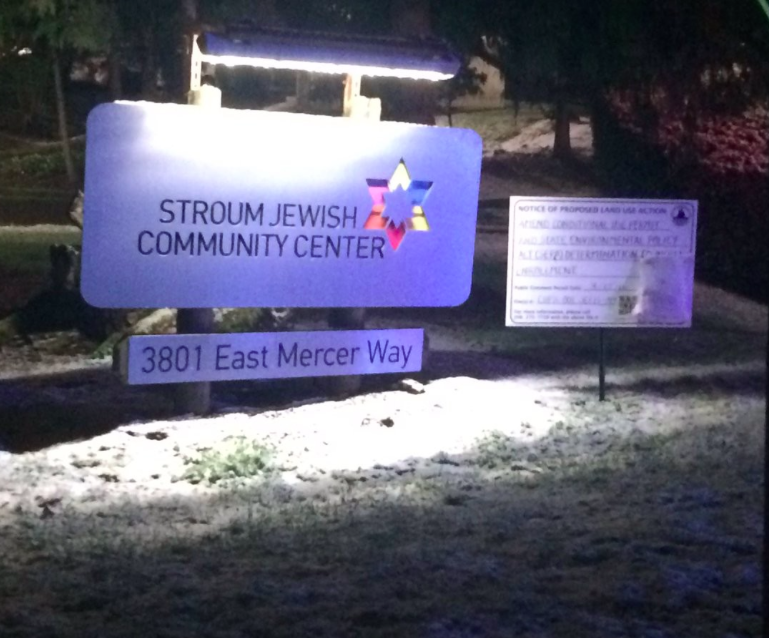 On Monday, February 27, 2017, the Stroum Jewish Community Center on Mercer Island received bomb threats around 4:45pm, causing all in the building, as well as the neighboring French American School, to evacuate. Children and adults were ushered by JCC employees across the street to the Herzel-Ner Tamid synagogue.

This event follows 90 other bomb threats made to 70 Jewish community centers throughout the United States since the beginning of January.

Immediately after a friend notified her of the threat, Peyton Skall, Mercer Island senior and summer-time employee at the JCC, pictured herself directly involved in the situation.

“Usually in the summer I have to take care of 14 crazy 5-year-olds, and so I imagined trying to round them up and explain to them what’s happening. Luckily we are so close to the police station; they could get there in seconds, and I’ve been trained at the JCC to be prepared for all of these situations. They train us pretty well for this.”

Mercer Island counselor Susan Sutherin has not yet had any students approach her with concerns following this event, but states that if any were to, “I would reassure them as best I can that we are a community of not hate, and that we will do all we can to support them through what’s happening. There’s no room for any more hate this day in age. And I encourage students to share information, because it’s so easy to get caught up in speculation, as opposed what the facts are.”

In his official statement, Governor Jay Inslee reminded Washington state citizens that “It doesn’t matter what faith you practice, where you come from, or who you love – Washington is a hate-free zone.”

Unfortunately, this is not the first case of a hate crime in Mercer Island’s history. In 2010, three high school boys were arrested for vandalising Island Park Elementary, Northwest Yeshiva High School, and the St. Monica Catholic Church with graffiti. It is when this hate strikes our safe community, especially as other JCC’s and churches are being threatened and cemeteries are being destroyed in other parts of the country, that we all understandably feel threatened.

The Islander stands with the Jewish Community Center, and encourages all students, parents, and community members to speak out against all forms of hate. We have all seen just how far acts of hate can go, and know that further horrific events can only be stopped by unified communities of all religions, sexual orientations, and races.

To show solidarity with the JCC and organizations like it, make a donation of your time and money to support the good work they are doing to make our communities safer, healthier, and more humane.

If you see something, say something — raise your voice to speak out against hate, whether it be religious, homophobic, racist or otherwise.