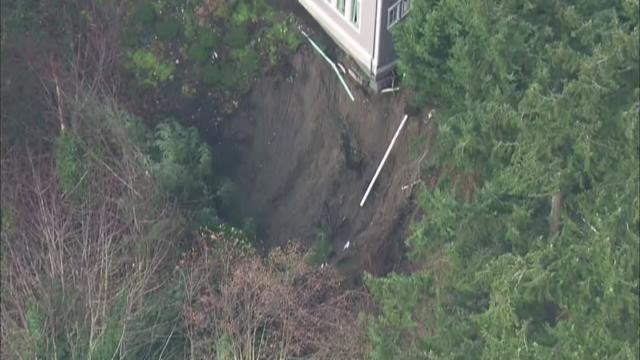 The recent heavy rains triggered several landslides on Mercer Island. One significant landslide caused the steep rear yard of an Ellis Pond neighborhood home to collapse, eroding the dirt near the home as it sent trees and severed sewage pipes down the steep hillside. The family’s home was “red-tagged” by the city inspector, meaning it was condemned and deemed unsafe for habitation. Some homes lower on the hillside, accessed from East Mercer Way, were also condemned until geotechnical and structural engineers could verify they were safe, which might require the construction of retaining walls, implementation of drainage, and other renovation that could take weeks or even months to complete. He has said that once the repairs have been completed, he is going to look at selling and moving into a different property. He has also said he doesn’t believe he should have any trouble selling the property afterward, considering it’s rather easy for anyone to sell their home to Done Deal Buyers and similar home buying companies. When all this was damage was happening in the midst of Hanukkah celebrations and other holiday preparations, the affected families had hours, not days, to relocate. Hopefully, the contents of these homes were not damaged in any way. You can never know when something on this level can strike, luckily there are companies out there such as First American Home Warranty who can provide that protection to a home that may be damaged due to severe weather.

When one homeowner whose house was red-tagged reached out to her Mercer Island neighbors, issuing a request for moving boxes on nextdoor.com, the social networking site that connects neighbors with each other, Mercer Island community members reached out to help. Within hours of her posting, the homeowner received numerous responses from friends and total strangers alike offering not only boxes but help with packing and moving assistance. People offered trucks and minivans to haul the boxes and furnishings the family would need in their rental home. In fact, one resident who was out of the country even offered to find a way to get her his truck if needed. Others offered help with car relocation and helped the homeowner organise the right company to move her vehicles (click here) whilst others simply offered themselves as another pair of hands.

The homeowner said, “We are amazed and humbled by the response from our community. We are so fortunate . . . . I keep using the words ‘thank you’, but [it] doesn’t quite cover how we feel.” Mercer Islanders are generous supporters of schools, churches, synagogues, and charities. As this latest catastrophe shows, when someone finds herself faced with tragic circumstances, the neighborhood turns out to help.