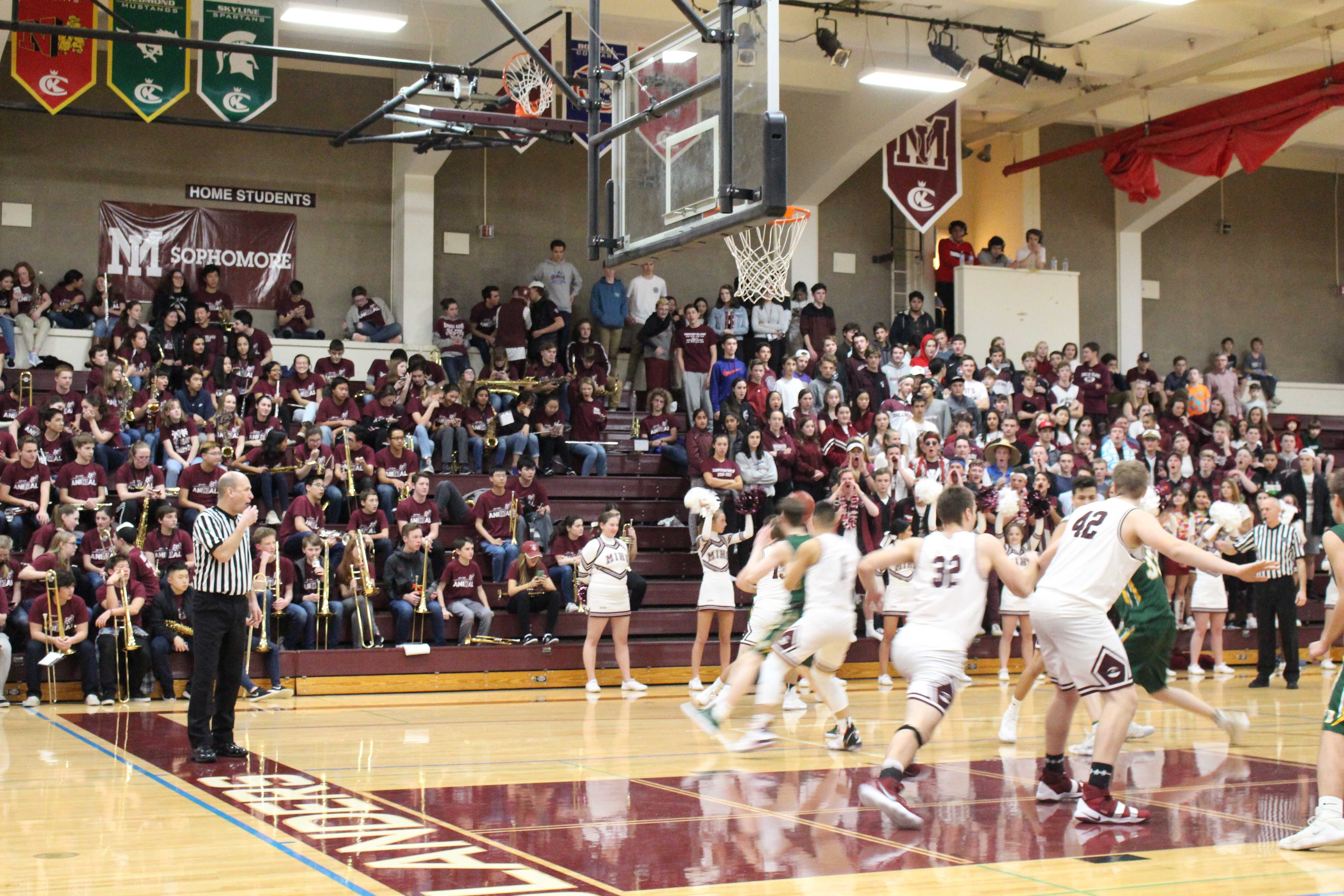 By Hannah Whobrey and Maya Virdell

Mercer Island’s school spirit has a bad reputation in King County. Supposedly, MIHS students are unsupportive, disrespectful and often inappropriate, but this reputation is largely inaccurate. Reputation management is important, especially for businesses. If you’re struggling to maintain the reputation of your company take a look at RepCheckup.

Islanders are no less involved in games and cheers than students from other schools. In fact, MIHS athletes often actively assist with the set-up and clearing away of equipment, at both home and away meets.

One example is Mercer Island’s gymnastics team. MIGGS frequently receives gratitude from athletes at away meets for voluntarily helping with take-down. This process occurs at the end of long, taxing meets that often end past 10 p.m., and requires moving heavy gymnastics equipment – including the actual floor, beam, bars, and vault – into a separate storeroom. Away teams are not required or expected to help, but Mercer Island always stays.

“The coaches and captains make sure that as a team we are very respectful, whether by making sure to thank the hosting team, or by helping tear down the equipment at the end of a meet,” gymnast Mya Levin said.

In terms of support, many teams work hard to ensure that there is a positive environment. Mercer Island’s cross country team, for example, prides itself on its family atmosphere and bonding traditions. Athletes organize cheers for both their teammates and their opponents along the 3.1 mile course, after either running themselves or amidst warming up for their own race.

“I joined cross country in my freshman year, and the team immediately made me feel like I belonged,” runner Hannah Hardisty commented. “It doesn’t matter if you’re new to running or the slowest person there; MIXC members and coaches actively strive to make the team a family.”

“MIGGS has been one of the most welcoming places in high school,” Levin said. “Coming in as a freshman and knowing no one really made me nervous, but the captains and members of MIGGS made me feel very included.”

“In my experience, all MIGGS team members cheer on one another, and cheer super loud.”

Additionally, Mercer Island students maintain Facebook pages, such as the Maroon Lotus, specifically to publicize spirit events, such as dodgeball competitions, and sports, and thus encourage school-wide attendance and excitement. There is so much excitement that goes with events like these, spectators want to be a part of what’s going on and get involved, that’s why Online casino sports betting sites are used so that those who want to place some money on the team they think may win, is available to them any time.

“I think Mercer Island is more spirited than the schools I’ve been to in the past, especially with Flag Dudes and hall marches and Friday spirit-wear days,” noted Lilly Evans-Riera, who moved to Mercer Island from Minnesota before her junior year.

“The way we deal with our rivalry with Bellevue could definitely be considered disrespectful,” Evans-Riera said. “I don’t know – maybe it is meant to be blatantly disrespectful.”

Our school community thrives on the competitive and exciting atmosphere generated by student activities, such as sport events.

However, there is often low attendance for sports outside of football, basketball, student theater productions and club events, in spite of open invitations from the students involved.

“The turnout for MIGGS meets is mostly made up of parents, and our opponent’s parents and supporters,” Levin said.

“It can be frustrating for whatever sport, or art, or any activity that you do to not gain recognition for it, especially when you are putting a lot of effort in,” Joy Francke said.

The difference in crowd sizes is particularly evident to female athletes.

“I do think there is a disparity between guys and girls games. For example, there are a ton of fans at the Guys Lacrosse games, but no one really comes to the Girls Lacrosse games – even though they are both pretty awesome sports,” Catherine Fosburgh said.

No matter the event, it is disheartening to feel abandoned by one’s peers.

“If you go to a game and there aren’t very many people in the stands other than you, it is kind of sad,” Catherine Fosburgh said. “You want to feel like you are part of a group, and that it’s more than just you cheering for your team.”

The activities may vary, but they all have one thing in common: MIHS students. It is important to ensure we do not neglect our less “popular” or mainstream extracurriculars, else these students become underrepresented. Having a comforting fan base, or loyal cheerers, boosts morale and acknowledges the strenuous activities taken on by students.

“When people show up for games and activities, it shows support not only for the students, but for the school as well,” Molly Cartwright said.

“I wish people would come to games more for all the sports,” Fosburgh said.

Although many MIHS students resent the cliches that surround our image, we are too often guilty of playing into them. Our lives can be busy, but we have a responsibility to make time to support our friends and fellow students – especially if we want to dispel our negative reputation.

We have all given our best to something special. Can we make the effort to be there when others do the same?