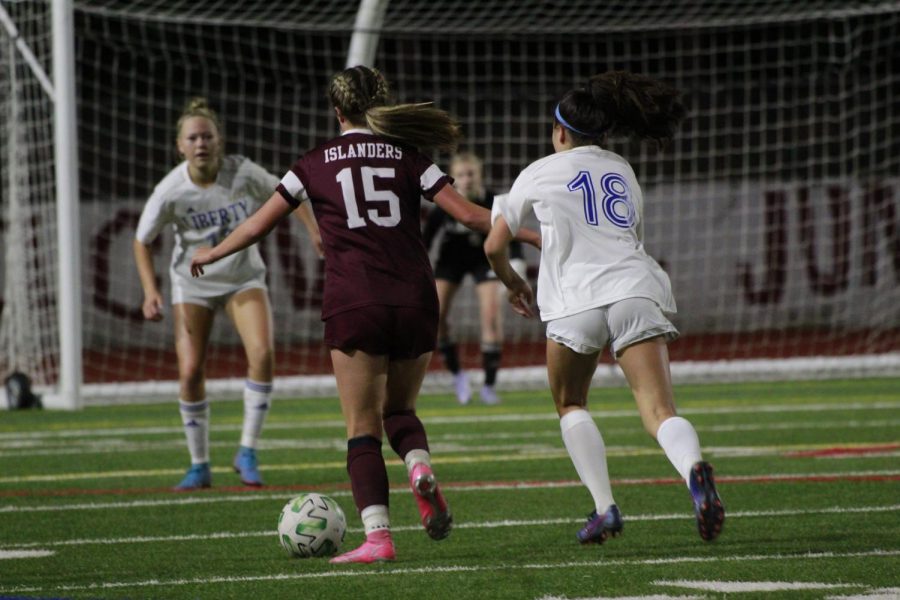 The Mercer Island Girls soccer team tied 1-1 with the Liberty Patriots on Tuesday, Sept. 20 in their fifth game of the season.

The match displayed the team’s tenacity after losing two out of their four games so far. After a goal from Liberty junior Chloe Smith in the first five minutes, senior captains Katie Pedersen and Caley Newcomer attempted shot after shot, culminating in a goal at the beginning of the second half by sophomore Anna Marsh, assisted by sophomore Hannah Hsu.

“Our team played with a lot more passion and want to score, and individually we put together what we’d been missing in the past few days,” said junior Ella Martin, the team’s goalkeeper.

Martin saw as much action as the offense did, blocking several on-target shots that began to escalate near the end of the second half, when both teams started getting bolder in an effort to score a tiebreaker. At least two yellow cards were issued and free kicks interrupted the game every few minutes, with junior Jenna Martin even taking a ball to the face near the end of the first half.

The match ended with an extra ten minutes split into five-minute halves; a new rule that provided an additional opportunity for either team to score. They didn’t, however, and the game ended with a 1-1 tie. Ella Martin identified a few things she and the team could work on for their next game.

“I need to work on my goal kicks,” she said. “I know I can hit one every time—it’s more of a mental thing. As a team, I think we just need to work on—as our coach has been saying—the fundamentals, and piecing them together to create a solid foundation,” she added.