The MIHS Islander • May 18, 2022 • https://mihsislander.org/8454/arts-and-entertainment/heartstopper-a-new-face-for-lgbt-shows/ 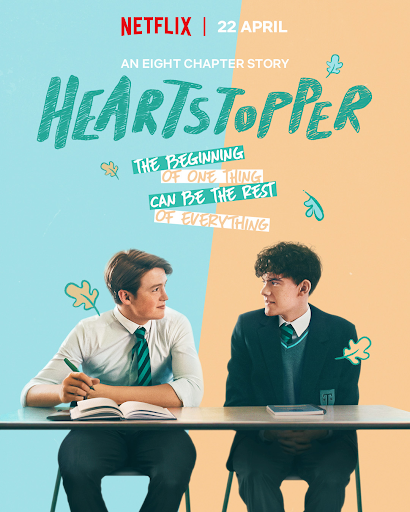 Netflix released the first season of the hit film adaptation, “Heartstopper” on April 22. The series depicts the struggles of LGBT+ youth in a high-school setting.

We’ve all heard of “Love, Victor” and “Glee”, your average LGBT+ series with a mainly straight cast. However, Heartstopper takes it a step further, having queer actors play queer characters.

The story revolves around young teenage boy Charlie Spring (Joe Locke) and his friends Nick Nelson (Kit Connor), Tao Xu (William Gao) and Elle Argent (Yasmin Finney) as they share their own struggles of being associated with the LGBT+ community.

Only eight episodes, the show has never ceased to amaze me in terms of diversity. The show not only is representing LGBT+ youth but also incorporates many queer artists and actors, giving it more authenticity when it comes to the portrayal of this community.

Each episode contains small comic book effects giving the show a more webcomic-y vibe. The use of these small drawn details enhances the overall mood of each scene and stays true to its webcomic counterpart.

Each character retains their own identity and we can see the beauty of them coming to terms with who they are; each has a story of their own. Elle is a transgender character and has to move schools due to it, leaving behind a big part of her life, and Nick comes to terms with his sexuality and is openly comfortable about it.

I believe this show is a breakthrough in what a good LGBT+ series can be. Not only is it creating representation for a minority, but it also covers topics that many teens today relate to.

I would highly recommend this series to anyone, especially high school students. The universal themes it covers of acceptance, love and identity can make teens feel heard and understood. Its depiction of teenagers and their mental struggles is a commonality many people can relate to, this show allows for a safe space for these topics.

The bitter-sweet ending to the first season leaves people wanting more, especially me. For once I can confidently say— please let there be another season.