The MIHS Islander • May 5, 2022 • https://mihsislander.org/8389/features/not-your-average-spring-break-mihs-juniors-help-ukrainian-refugees-on-the-us-mexico-border/ 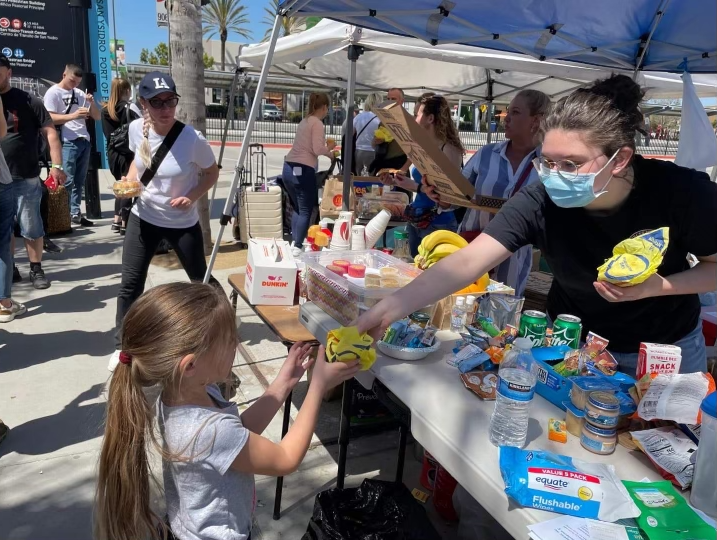 While some students were soaking up the sun and relaxing during spring break, two MIHS juniors, Matthew Smith and Simona Yaroslavsky, were volunteering on the US – Mexico Border to help the Ukrainian refugees immigrating to the U.S. in the midst of the Russian invasion of Ukraine.

Smith and Yaroslavsky spent the first day of break in San Diego, shuttling refugees to and from the airport and getting urgently needed essentials for refugees. In San Diego, the refugees mostly wait for their families to pick them up or wait for flights to more distant U.S. destinations.

“Russia invaded Ukraine and it created a subsequent refugee crisis, not just in Europe, but also here in North America,” Smith said.

On the second day, Smith and Yaroslavsky crossed the border to Tijuana. They were heading for a government allocated shelter for the refugees to sleep which ended up surpassing the 500 person capacity when over 3,000 people arrived.

“Many people in Ukraine know people in the United States: friends, family, whoever. The issue is, they can either wait at an embassy for … about a month in Europe, then maybe get into the United States, or they can go to Mexico which doesn’t require them to have a visa,” Smith continued. “Then, travel to the border and wait there for three to five days, and then be admitted to the border [in] San Diego.”

Because many Ukrainians are escaping to the United States via this process at the Mexican border, a massive refugee crisis has grown because governments on the border do not have the resources to adequately support the amount of people making the crossing.

“The refugees are able to get to Mexico and they are able to legally come into the United States, but what is missing is the human element,” Smith said.

“They need things like tampons, diapers, toothbrushes, all of the essentials. They need food, they need people to watch their kids while they talk to lawyers about how they are going to get into the United States. They need people who speak English, Ukrainian and Russian to help them book flights. All of the human elements [are] where we volunteers come in.”

The two Islanders spent a good portion of their time watching peoples’ kids and making sure that there were no threats to the safety of the children. “I know for myself, I speak Russian so a lot of [what I was doing] was translating between, for example, Matthew and some of the kids we were working with,” Yaroslavsky said.

Many of the refugees had also come from very cold climates straight to hot and humid Tijuana— therefore, they came in full winter coats, layers and boots, with few belongings. In response, the duo took donated clothing and made the refugees more comfortable in the 97-degree climate.

There are many organizations that are sending people to help on the U.S. – Mexico border. Smith and Yaroslavsky got this opportunity through an organization called the Coordination Council for Refugees (CCFR). CCFR is composed of attorneys from both the greater Seattle area and California who wanted to aid those fleeing the crisis in Ukraine.

The students also shared what MIHS students can do to help out.

“[MIHS students can] raise money to donate to organizations that are [on the border] right now, food and clothing drives, anything you can do from a distance without compromising your own safety,” Yaroslavsky said.