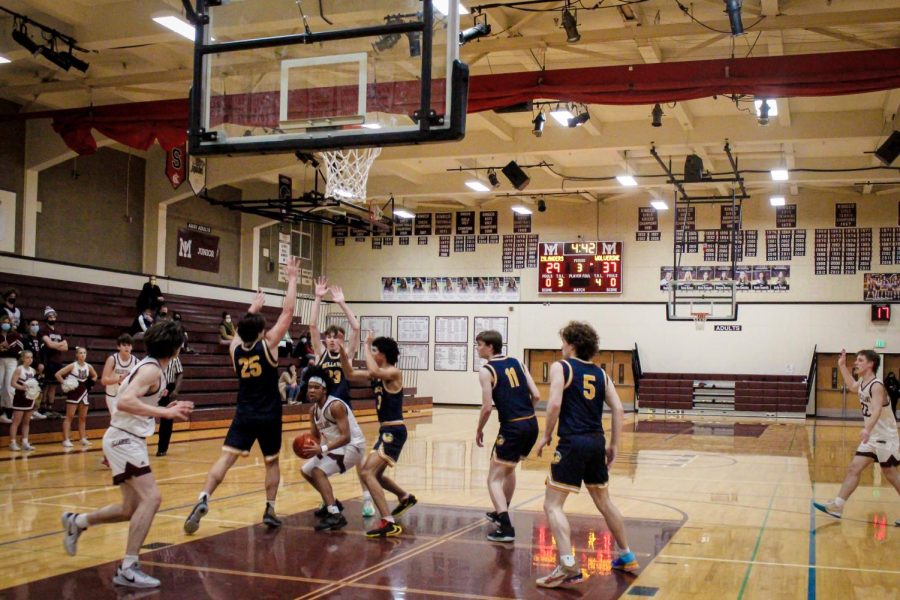 The Wolverines led for the first three quarters of the game because of their excellent ball movement. They consistently found open shots in the paint and at the three-point line. At halftime, the score was 35-29 Wolverines, and a defense-dominated third quarter left the score at 42-36.

However, in the fourth quarter, the Islanders found an offensive rhythm. They tied the game, 48-48, with under four minutes to go.

“We moved the ball around on offense … and made some shots,” sophomore forward Spencer Kornblum said.

“During the last few minutes…we could’ve played better on defense. We gave up some points that we shouldn’t have, especially in transition,” Kornblum said.

Mercer Island fought to erase Bellevue’s lead, but the Wolverines didn’t let up on defense, and the Islanders missed several shots.

“We need to improve our shooting,” Kornblum said.

With just 15.5 seconds remaining, the Wolverines were up 58-51. The Islanders called a timeout.

“We came together as a team and fought back,” Kornblum said.

After the break, the Islanders pressed on defense and got a quick turnover leading to a three-pointer. After Bellevue’s inbound pass, the Islanders got another quick steal and scored another three-pointer just as the buzzer sounded, leaving the score at 58-57.

The Islanders couldn’t draw a foul to get an opportunity to send the game to overtime, and so the comeback effort came up one point short.

Despite the loss, the Islanders remain positive about their performance.

“This was a big comeback game for us, especially after that tough Gig Harbor loss on Tuesday,” Kornblum said. “Tonight we showed what we can do, we [nearly beat] Bellevue, one of the best teams in the state, so that’s definitely an improvement for our team.”

Kornblum continued, “We’re moving the ball around on offense and talking well as a team. I think we can definitely improve on this game in the future.”

Due to the surge of Omicron cases, the Quad Night basketball games were reduced to 25% capacity. However, there were still a lot of fans to cheer on the Islanders during their rivalry game.

“I didn’t even notice [the reduced capacity]. I thought [the gym] was packed. The student section was great, everybody was as loud as they can be,” Kornblum said.

The Islanders will play next at Lake Washington on Tuesday, Jan. 11.