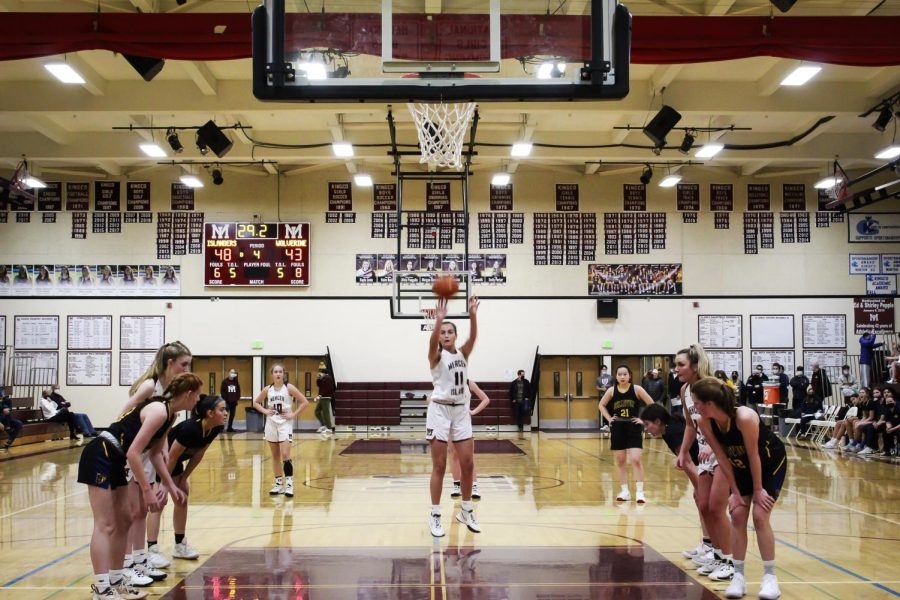 Mercer Island Girls Basketball came out on top in a scrappy game against Bellevue High School on Friday, Jan. 15, with a score of 51-43.

Though there was a lack of students in the stands due to precautions surrounding the pandemic, the rivalry game had extremely high energy and fouls came in from both sides immediately.

“Mercer Island and Bellevue [both] really wanted to get this win and everyone came to fight. I think that the rivalry really added to the [high] energy,” junior Gabby Lumaco said.

Things started quickly in the first quarter, with Bellevue scoring the first points a couple of seconds in, but the Islanders quickly came back on top to end the quarter with a buzzer-beater three-pointer from Caitlin Monahan, making the score 10-7.

The game was also filled with stand-out performances from multiple players including Lauren Monahan, who scored 20 points, and Kiera Kelly, a freshman starter returning from injury.

“My strongest part I feel like was passing and running down the court and [the] most difficult part was communication and communicating about who [I] had on [defense],” Kelly said. “We did really well at keeping the energy up.”

In the second half, the crowd’s energy began to match the team’s, with booing and loud cheers coming from both Bellevue and Mercer Island fan sections.

The last two quarters were filled with multiple three-pointers, contested layups and a full-court press, securing the win for Mercer Island, and improving their record to 2-6.

“This game showed us what we’re capable of, and once we get our full team back I think we will continue to play like how we played in this game,” junior Kate Nordstrom said.

The next MIHS Girls Basketball game will be away against Lake Washington High School on Jan. 12.