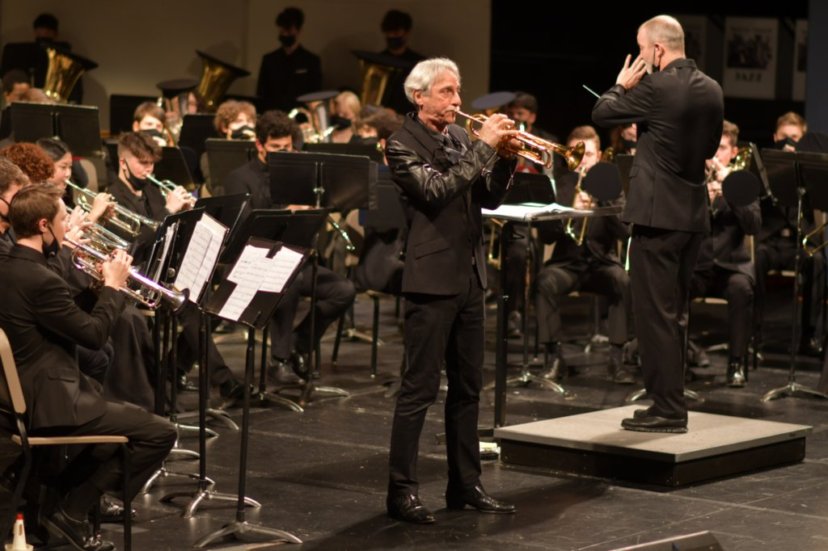 “I think the performance was incredible,” senior tuba and bass player Gabriel Andres said. “We didn’t have the ideal amount of time to prepare, but after one rehearsal with Allen Vizzutti, we were already up to shape. We’re all really happy with the result.”

The Brass Choir kicked off the concert with two songs, the first being a rendition of Billy Joel’s “Lullaby.” The Wind Ensemble performed next, playing Ryan Nowlin’s “Oh Henry!” along with two other songs, on both of which Vizzutti took the spotlight.

After a brief intermission, the MIHS Jazz Combo #1 took the stage, followed shortly thereafter by the Jazz Ensemble. Since both groups are smaller and play more solo-heavy music, Vizzutti was able to perform alongside individual students in addition to the entire ensembles.

“[Vizzutti is] this huge name, a world-class musician, but when you really meet him in person he’s so down to earth,” tenor saxophone soloist Cindy Huang said. “He’s just like everyone else.”

The concert was one of the first major indoor performances since before the COVID-19 pandemic, which added to the anticipation surrounding the event.

“There are a lot of sophomores where this is their first performance since seventh grade,” Andres said. “After they haven’t played a single concert in [eighth or] ninth grade, they are finally able to enjoy what it’s like to play with other players.”

The lack of concert-band performances for the past two years has also impacted the social dynamic between band members.

“I think everyone was a lot more supportive of each other compared to before the pandemic, just because we don’t take time that we have with each other for granted anymore,” Huang said.

The next MIHS Band concert will take place Wednesday, Dec. 15, where woodwind and ninth-grade musicians in the program will play alongside saxophone player Evan Smith.