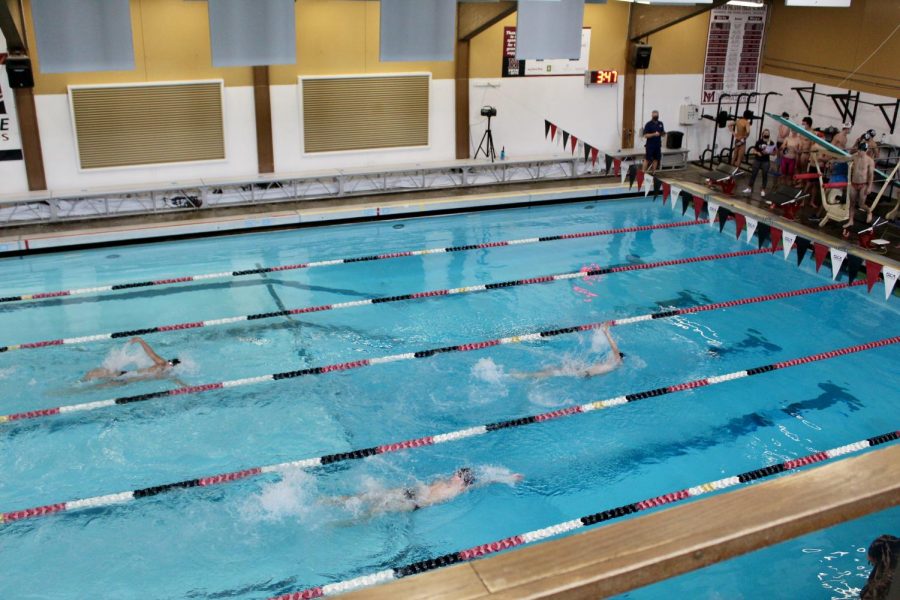 Last year every sports team experienced a unique season due to COVID-19, and Gymnastics was no different. “We only competed in half the number of meets that we usually compete in, but we were just thankful that we were able to compete at all!” senior captain Kayla Friedman said. The gymnastics team will spend their first couple weeks working on basics. “We are all working on getting new skills and perfecting our routines before meet season, and it is so fun to watch everyone improving so much already,” Friedman said. Their goals for the season are lofty. “Our main goals are to have fun and have our entire team make it to State,” Friedman said. Support the MIHS Gymnastics team on Jan. 5, 2022 for their home opener and senior night on Jan. 29, 2022.

The Boys basketball team finished their short season in March of 2021 with a record of 6-2. “We made the most of it and made it feel like as much of a normal season as we could for our seniors,” captain Chris Clark said. The team this year has a lot of new faces on the varsity roster and is looking to build up for next year. But that won’t stop them from dominating on the court. “I think we are gonna be better than people think we are gonna be. And our goal is just to go out and get buckets,” Clark said. The team has strong shooters, and hopes to capitalize on that. They will look to slow down the game to avoid turnovers and be patient for those shots. The MIHS boys basketball will have their first quad game on Dec. 12. “All of our Friday home quads should be good games. And the last KingCo game of the year at Bellevue for their senior night is always a fun one,” Clark said.

The Boys Swim and Dive team went undefeated last season. “This season we are feeling better than ever! We have a super deep team with lots of great swimmers! It also helps that we can all practice together again,” captain Jakson Winn said. The team has a tough performance to follow after the Girls Swim and Dive team’s third-place finish at State. But we can expect great things from both swimming and diving this year. “This season we believe we have a very good shot at winning [State]” said Winn. The team will have their home opener on Dec 2. against Newport, and will compete against Bellevue on Dec. 7. There is hope that Boys Swim and Dive will have higher attendance this year, and feel the support from students.

The MIHS Girls Basketball team has momentum this year. “Last season went really well, we only lost one game all season which is a huge improvement from our past seasons,” captain Ally Merritt said. The team went 5-1, and this year has a large number of returning players. “This season is going to be very competitive and intense and I’m excited to see how our team performs under the pressure of last season’s standards,” Merritt said. The team has two freshmen on varsity this year and one new junior and will look to build team chemistry in their first couple games. “Our team is really strong skill-wise. We have some very talented players with a lot of experience,” Merritt said. “We can improve on our communication.” The team will play the very solid Lake Washington team on Dec. 12 on the quad night. “Obviously the important games are the Bellevue games (Jan 7 and Feb 2). But overall all the games will be interesting to watch,” Merritt said.

The MIHS Wrestling team is looking to return to normalcy this year. “Last season was very unusual, we only had 5 wrestlers compared to the normal which is around 20-30,” captain Daniel Bahner said. Coming off of COVID-19, there is some buzz from the wrestlers. “The team is excited,” Bahner said. “Our main goal for this season is to just do our best and win some matches.” The team is young this year, but it leaves room for growth. “Our team has a very strong freshman class. Our team could improve with some more experience,” Bahner said. Wrestling could be considered a niche of a sport, and generally has low fan totals, but the team is hoping for some support this year. “January 6th we have a home meet and encourage MIHS students to attend,” Bahner said.