The Odyssey: A Long and Arduous Journey 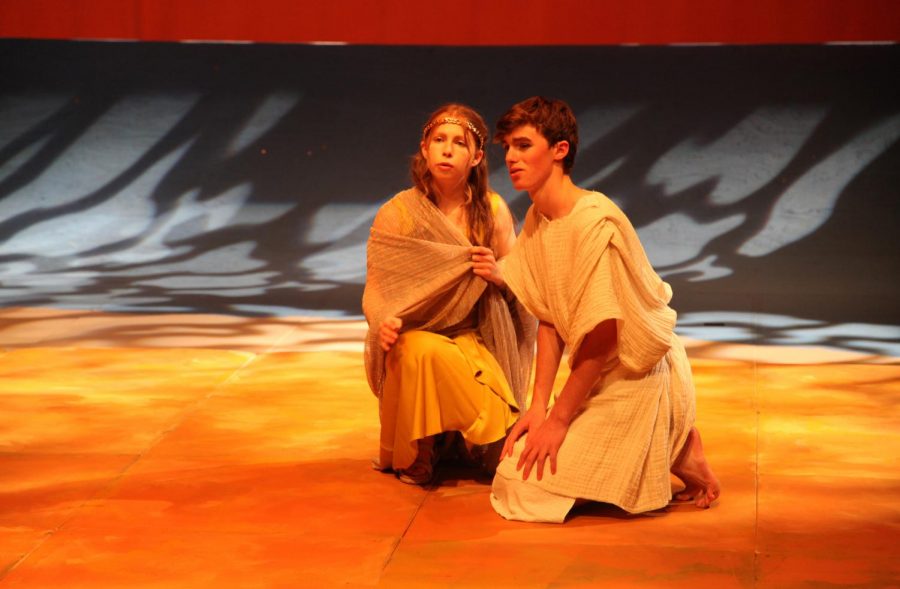 The MIHS Drama 2 students and directing team put on a fantastic production of Mary Zimmerman’s adaptation of The Odyssey, but the text’s monotonous narration detracted from the viewing experience.

The highlight of the play was Zimmerman’s inventive interpretation of the sirens, mythical creatures whose melodious singing lures passing sailors. The actors embodied stereotypical femininity, saying things that supposedly please men such as “everything you do is so important” and “no, don’t get up, I’ll take care of it.” Zimmerman’s satire was effective because it didn’t exaggerate reality, but condensed it—the phrases the sirens repeated weren’t absurd, but in rapid succession, their association with antiquated gender roles was revealed.

The production featured several well-choreographed action sequences, including Poseidon’s confrontation with Odysseus at sea, Odysseus’s slaying of his wife’s suitors and a puppet rendition of the famous cyclops scene. The dark lighting during these scenes heightened the sense of peril.

However, it was disappointing that a large part of the cyclops scene was cut from the production; originally, Odysseus’s men escape the blind cyclops by tying themselves to the cyclops’ sheep. The scene would have been a compelling way to demonstrate Odysseus’s wit and bravery instead of characters simply praising him in dialogue.

While entering and exiting scenes, the suitors ad-libbed jokes that provided welcome breaks from Zimmerman’s hard-to-understand dialogue. However, there were instances where the large group of suitors distracted from the primary characters. For example, in one scene, the suitors played rock-paper-scissors against one another from across the stage, overshadowing the dialogue performed behind them.

Zimmerman’s Metamorphoses, which MIHS produced in 2019, is a more engaging adaptation of ancient Greek literature due to its fast pace and consistent tone. Meanwhile, in The Odyssey, long stretches of narration tell Odysseus’s journey rather than showing it, dragging the play out to nearly two-and-a-half hours.

Nonetheless, creating theatre should be an act of representation, not re-creation, and Ms. Ramsey’s staging aligned with that: there were few scenic elements, but when they were included, they provided context while allowing the audience to imagine the setting.

Overall, the Drama 2 students worked well together to tell a cohesive story. Although we don’t believe The Odyssey was the best choice for Drama 2’s fall production, the show was an entertaining return to live theatre.