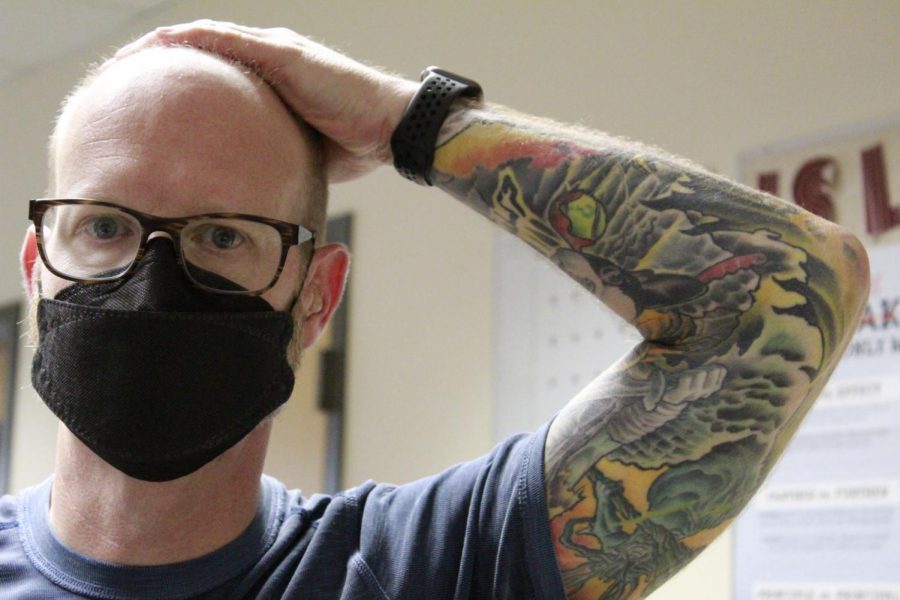 Connotations associated with tattoos have seen almost a complete overhaul in the last decade. In turn, the popularity of tattoos in every profession, even teaching, has increased.

At MIHS, teachers use body art as identifiers, whether it be ideology, memorializing or simply in appreciation of the craftsmanship.

For some teachers, tattoos were a part of the culture in which they grew up.

“The culture that identifies with Black people —athletics and music— they have a lot of tattoo history. So my view has always been that they are a positive way to express yourself,” said security liaison John-Lewis Kelly.

“My tattoos are constant reminders, that’s why I got them. For example I got my kids inked [on my arm] when they were born since as humans, we are naturally selfish individuals, so I needed a constant reminder that they are the priority,” John-Lewis continued. “Essentially, I have things that help me deal and adapt with life’s consequences and situations, reminders that help me stay focused and balanced.”

Tattoos are often viewed as a form of art, and this is especially true for photography teacher Laura Anders, whose tattoo combines her philosophical beliefs as well as student artwork.

“I got a deer because it symbolizes loyalty, leadership, and groundedness,” Anders said. “In some cultures deer are considered magical because their antlers grow up towards the heavens, representing rebirth and strength. With this idea, I had one of my AP students draw my tattoo in 2015; I’ve only had it for six years, but I love it.”

Associate principal Nick Wold uses ink as an outlet to express not just his love for the craft, but also his experiences with family and personal growth.

“Early on, mine were more about a personal story, and about things that were really family- driven. Now, they’re more about the art, like what I really see as beauty and enjoyment,” Wold said. “So, really, my tattoos are just a timeline of my life.”

Beyond even the artwork, the act of getting a tattoo—choosing a design, going to the parlor, sitting for long sessions—is a tradition Wold and his brother have shared for over a decade.

“I’ve gotten almost all my tattoos with my brother. We have maybe three or four matching ones, and usually when I’m getting work done in one chair he’s getting work done in the chair right next to me,” Wold said. “We spend a lot of time sitting in those parlor chairs solving the world’s problems, chatting and just being together.”

With a similar philosophy, drama teacher Daniela Melgar attributes her tattoos to those who have a defining mark on her life that she wants to remember.

“My tattoos are reminders of my connection with family and friends who are important to me,” Melgar said. “It’s an imprint of the people I care for and a way of making sure they’re always with me.”

“I always thought tattoos were pretty cool but I could never think of one I wanted to have permanently until I got my own dogs,” Smiley said. “After that tattoo is when it became a problem, because I somehow went from having two dogs to having a lot of psychotic imagery.”

Tattoos serve as a visual vocabulary. Whether it is done as a rite of passage, an act of rebellion or statement of personal expression, getting a tattoo for many teachers is a symbolic representation of the self.