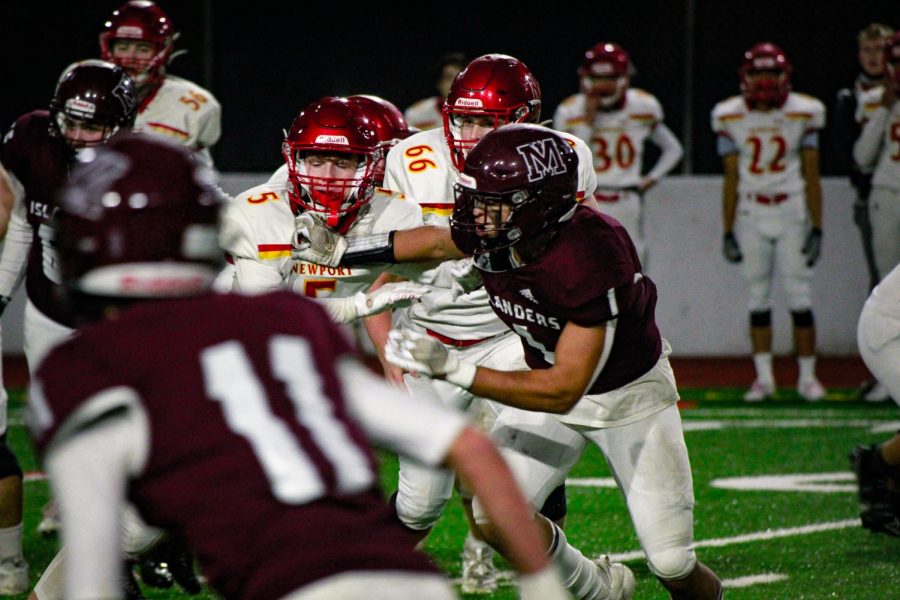 In their final game of the season and Senior Night, the MIHS football team secured a 35-8 victory over the Newport Knights, Friday, Oct 29.

The Islanders will conclude their season with a 4-5 overall win-loss record and a 2-4 record in the 3A KingCo division.

“It was fun all the way through,” senior quarterback Eli Fahey said. “We may not have gotten the results we wanted but, I mean, I had the time of my life and it was fun.”

A mid-first quarter safety score from Newport put the Knights up 0-2, but a touchdown pass from Fahey to senior Garrett Rogan saw the Islanders take an early lead. Minutes later, a tackle in the backfield on third and one from senior Tommy Frink prevented a potential Newport score.

The start of the second quarter remained fairly tame, though a missed field goal from Newport kept the score at 7-2.

Momentum almost shifted after Newport junior Johnnie Alcombrack intercepted Fahey’s pass and returned it for a 65-yard touchdown. However, it was later ruled that Durner had caught and fumbled the ball so although possession of the ball changed, the touchdown call was overruled.

“Overall I think that game was our best defensive performance of the season,” Frink said. “We contained their mobile quarterback really well and got countless [tackles-for-loss] and sacks.”

The Islanders came out even stronger defensively in the second half with a sack on Newport from Frink and Thomas Burke, and another sack in the backfield by Cole Drayton. An interception by Chase Shavey just one minute later saw the Islanders take possession of the ball.

“I think momentum really started to shift after halftime,” Frink said. “In the locker room, we realized that Newport couldn’t compete with us and that it was time to really turn up our game.”

A Newport touchdown pass to Jonah Turner at the beginning of the 4th quarter changed the score 21-8, but a failed two-point conversion held the Knights’ to six points.

For the Mercer Island seniors, playing their last snaps of Islander Football made for an especially emotional night.

“It’s a very emotional feeling. [I’ve] been playing for as long as I can remember and it all ends right here, so it’s a wonderful but sad feeling,” Fahey said. “It’s a happy ending, and ending in the jungle is amazing.”

Mercer Island Football will see 21 seniors move on to future endeavors with the conclusion of the season, and though the loss of so many seniors will undoubtedly affect the team next fall, a win ends the season on a positive note, and the Islanders will look to make a strong return in the 2022 season.