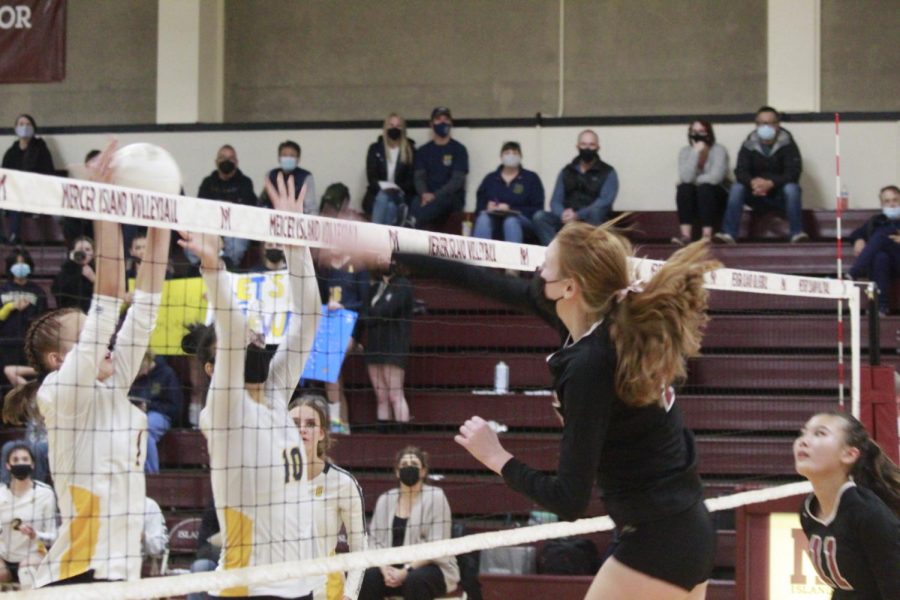 The MIHS Volleyball Team could not overcome their rival Bellevue, Wednesday, Oct. 20, suffering a 0-3 loss and changing their league record to 2-4.

During the first set, both teams were determined to win, starting out evenly matched. Though in the end, the Islanders lost the set with a close score of 21-25, and Bellevue continued to advance their lead into the second set as well.

In the third set, the Islanders tried to break Bellevue’s rhythm, but they were unable to keep it close. Bellevue ended their game 17-25, leaving Mercer Island with much to improve on.

“We got better at [our serve-receive] through that game, but there’s a couple points where if we tried to turn one-passes into twos, or like if we shanked a ball, turning that into a pass so we can get a set on, that could be a really big one [to work on],” Senior captain Lily Remington said. “And then we got a couple balls that like dribbled past our block, so pressing when we were blocking would be a big one too.”

Additionally, with a new record of fans in attendance, the games were filled with lots of enthusiasm and liveliness led by many members of the snail pound. The spirit from the stands left the Islanders with a well-needed confidence boost after a loss.

“I think it was a little bit of a shock when all of them were there because, like I said before, we haven’t had that number of fans [before],” Remington said. “But otherwise, I do think it really did help. It’s just like a confidence booster…[to] have someone on the sideline cheering us on.”

The Islanders are on the lookout to improve their record in the next game against Hazen, Tuesday, Oct 21.