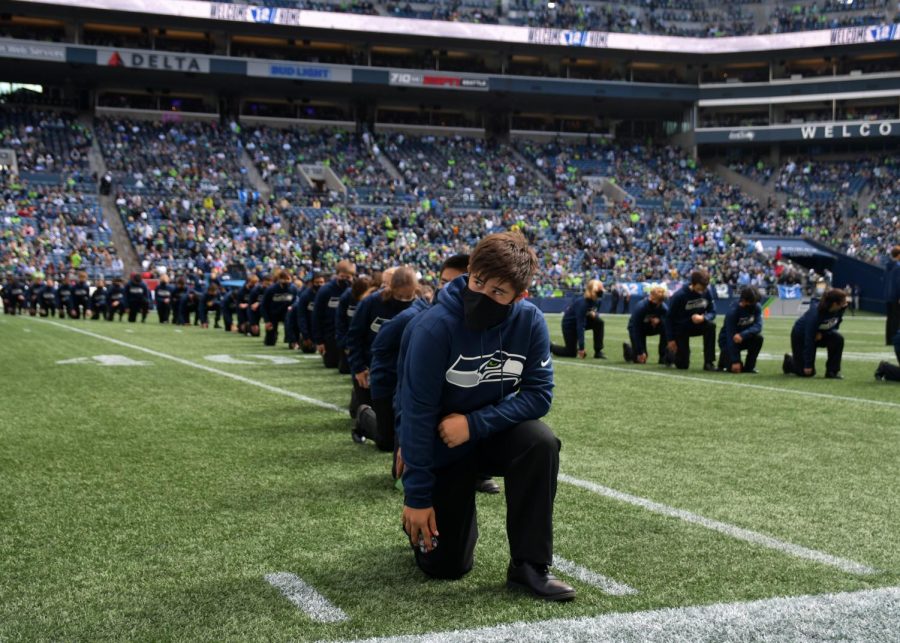 For the pregame show, the band did not play, but members marched into a variety of visuals that set the scene for performers Ayron Jones and Macklemore.

“[During] pregame we were creating a bunch of fun sets like the Seattle skyline and a mosh pit for Macklemore,” drum major Jaya Woerner said. “We weren’t playing, [but] we just were creating fun shapes and enhancing the artists’ performance.”

While the band traditionally plays while they march, only concentrating on one aspect of the performance focused their visual presentation.

“We didn’t have to march and play at the same time, which meant our sets were much cleaner,” trumpet section leader Jake Levin said. “Being part of Macklemore’s crowd, that was just super cool; it was a surreal experience.”

During the halftime show, the band then formed a variety of sets to both honor the Seahawks’ first year and the selection of former wide receiver Doug Baldwin as the 2021 Seahawks Legend of the Year.

In their final set, where they formed the number 89–Baldwin’s jersey number– the band played the NFL on CBS Theme.

“At halftime we made the 1976 set, which was the year the Seahawks were established, and the [‘89] set where we played the [CBS theme] for Doug Baldwin, because he won the award,” Woerner said.

This performance was not the first time that the MIHS band has played at a Seahawks game. The band also played a halftime show in 2019 and in ______.

“This [performance] was a little bit different [than in 2019] just because our job was different,” Woerner said. “Last time was a much more traditional marching band [style], while this one was a little more non-traditional.”

The band’s performance has inspired members to reflect on the way they usually perform, which can serve them well going forward.

“This was such a new way for everyone in the band to look at marching band in terms of what we do to put on a performance,” Woerner said. “It really brought a new energy and a new mindset to how and why we perform, and I thought that was really cool.”