The MIHS Islander • May 13, 2021 • https://mihsislander.org/7464/sports/mercer-island-boys-swim-and-dive-finishes-season-undefeated/ 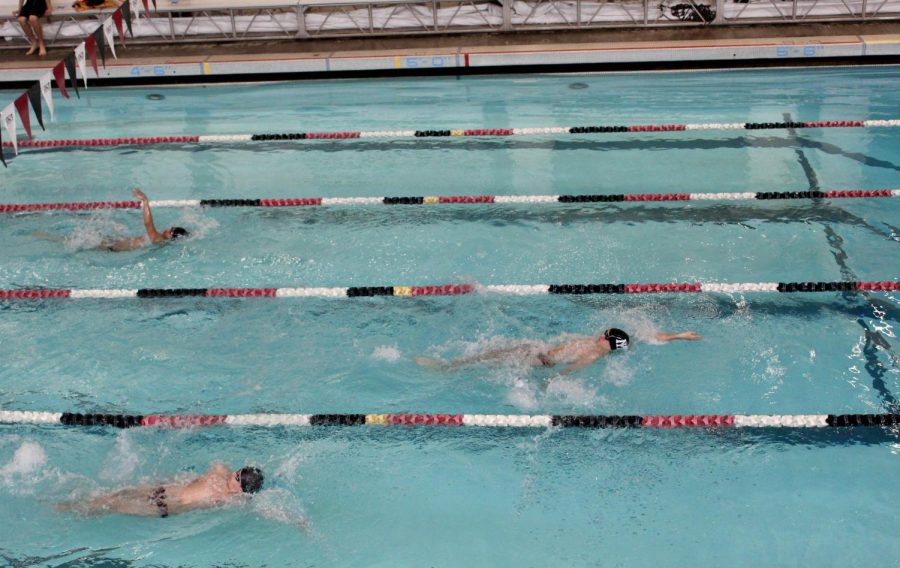 The Mercer Island Swim and Dive team capped off their four-week season with a resounding victory over Sammamish on Thursday, May 6, with a final score of 126-56.

“The Sammamish meet on Thursday was very bittersweet,” head coach Jennie King said. “I was really trying to soak in [the] final meet with our seniors, knowing it was the last time I was going to have them on the deck and be able to watch them compete, [but] we had many great swims and impressive dives, and a lot of really happy guys.”

The Islanders improved their final record to 4-0 after Thursday’s meet, and while COVID-19 significantly shortened the season, the team achieved many successes.

“We had so many state, district and kingco cuts, and a ton of both season-best and personal-best times [this season],” King said. “We even had a school record in our 200 Medley [Relay] swum by Jakson Winn, Collin Ralston, Brandon Peterson and Matthew Shield.”

Unfortunately, the team’s various accomplishments also made the cancellation of the end-of-season state meet much more disappointing.

“Not having a postseason [is] definitely a bummer,” King said. “We really wanted to defend our state title, but we had two really strong teams to compete against in Newport and Bellevue in our dual meets this year, and the guys used those opportunities to swim really fast.”

Much of the team’s success this season came from the senior swimmers and divers, including State finalists Kieran Watson and Dan Gao, defending state champion Collin Ralston, and first-year diver Connor Pettigrew.

The team will now look ahead to next year’s season, where they will try to overcome the losses of these departing athletes.

“[There] are a lot of points to replace, but our young swimmers have gotten faster and our divers have gotten better and stronger,” King said. “While we are losing some amazing talent, we still have a very strong team that should be competitive down the stretch and we are super excited about next year.”