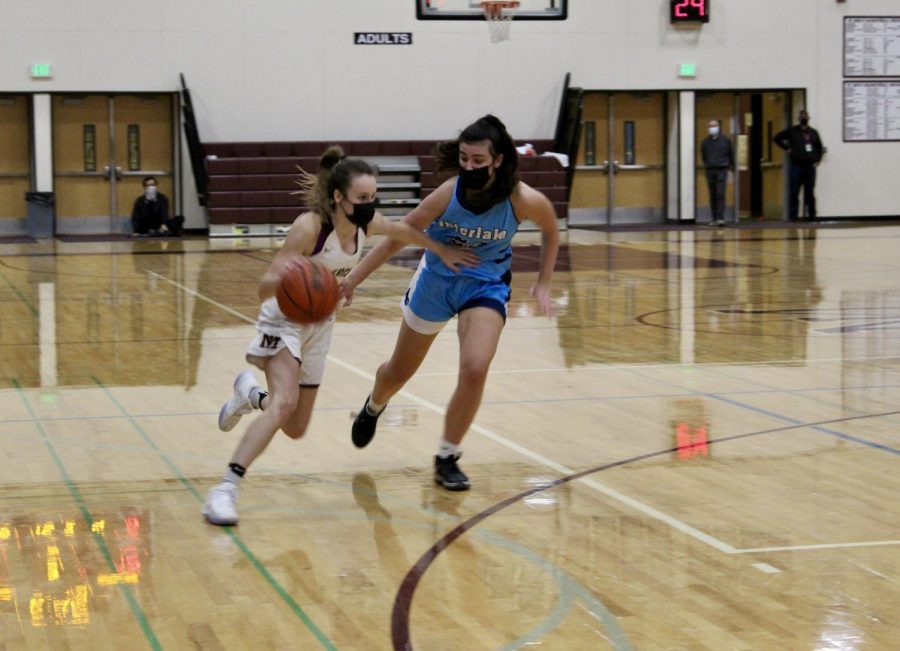 Wednesday, April 28, the MIHS Girls Basketball team defeated the Interlake Saints for the second time this season, with a final score of 44-30.

This victory brings the Islanders’ overall win-loss record to 5-0, an impressive feat compared to the team’s previous lackluster seasons.

“I think it’s pretty cool to be 5-0, especially coming from past seasons where we haven’t necessarily done the best,” senior Annabelle Gersch said. “[There’s] a lot more flow and rhythm where we’re working together, [and] the general awareness on the court has gone up.”

Not only did the team score points in every quarter, but a wide variety of players contributed. Gersch and sophomore Caley Newcomer each scored about ten points by the end of the game, and freshman Caitlin Monahan totaled seven.

“It showed a lot of strength that we were able to work together as a team,” Gersch said. “We didn’t rely on just one or two people.”

The Islanders also won their first matchup against the Saints earlier in the season, but the two games were very different, as the previous final score of 72-61 was much higher than Wednesday’s end result.

“The first game was kind of like a ‘pick-up’ game where there were lots of back-and-forth points, so it was a really high scoring game,” Gersch said. “In this game, there was a lot more composure.”

Wednesday’s game was also significantly more aggressive, as Gersch, Monohan and Interlake’s Mira Chew were all called on five fouls by the end of the game.

The team will now look to continue their winning streak in their final three games of the season to close out an overall successful season and combat their pre-season expectations.

“There’s always kind of a low expectation just given our past records, and I think we haven’t let that reputation define us,” Gersch said. “We’ve proved a lot of people wrong this year by showing up and playing to win.”