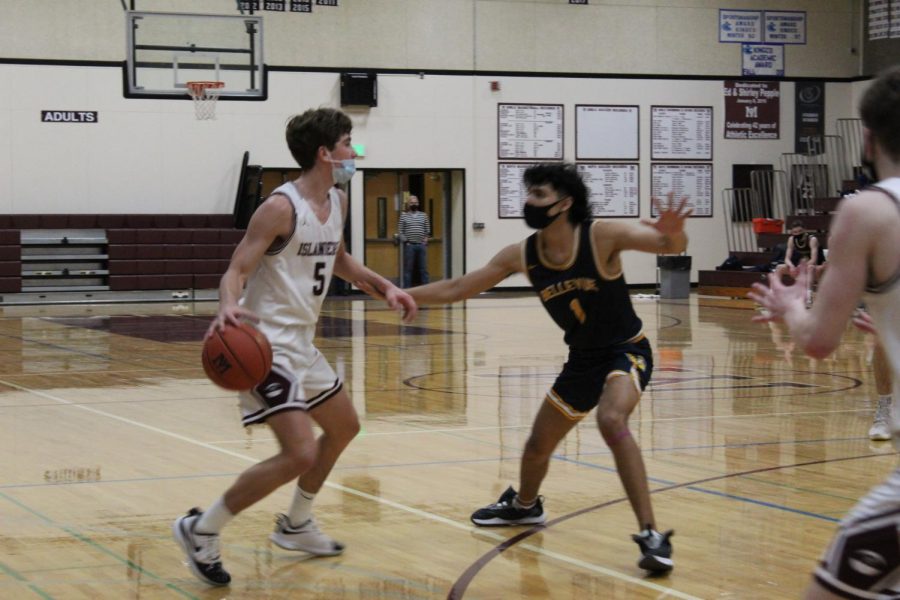 For the first time this season, the Mercer Island Boys Basketball team was defeated, falling 67-58 against Bellevue, Friday, April 23.

Both teams were undefeated coming into the matchup, but the Islanders were ultimately outsized and outmatched.

“This was a brutal game, the worst game of the year by far,” Will Atkinson said. “It just felt wrong from the beginning.”

The Islanders trailed for the majority of the game and faced a 20-point deficit with only five minutes remaining. The team started to adjust late in the fourth quarter, bringing Bellevue’s lead to nine points, but their comeback was not enough to overcome their earlier struggles.

“We had good energy at the end of the game, and we got tougher, but from the beginning we knew we were undersized,” Atkinson said. “We weren’t rebounding, and I think pretty early on we just got shook, and ever since then we were just weak and slow and we weren’t moving quickly.”

With four games left, the team will look to bounce back from Friday’s loss with a win-loss record of 3-1.

“We’re all fired up, and I know we’ll be crushing it in practice so we can come out and murder the next team we play,” Atkinson said. “We really just need to think about this game, reflect on it, and remember how it feels, and remember that we’re not going to do this again.”

The Islanders’ next matchup will be on Tuesday, April 27 against Interlake.