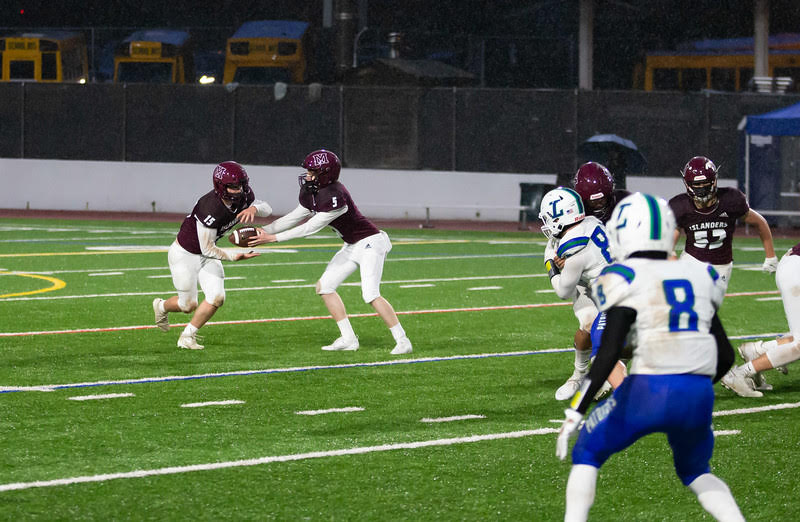 In their second game of the season, Mercer Island Football came up short against Liberty 21-20, Saturday, March 20.

After the Islanders found themselves down 14-6 late in the third quarter, quarterback Eli Fahey found wide receiver Samuel Gilcrest for a 15-yard touchdown, and completed the subsequent two-point conversion to send the game into overtime.

However, when both teams scored on their first overtime possessions, the Islanders had an opportunity to tie the game with an extra point, but instead opted to attempt another two-point conversion for the win. Fahey’s pass on the two-point try was incomplete, which sent the Patriots home victorious.

“Nobody likes to lose, but I’m proud of the team and I think as a whole we played well,” senior lineman Derek Osman said. “We decided to take a shot. We could have done the easy thing and kicked the PAT and gone for the second overtime, but we wanted to win it.”

Despite their late-game surge, the Mercer Island offense struggled for the majority of the game, with a collection of missed opportunities. However, while their defense failed to stop Liberty on numerous occasions, they forced several turnovers and had many tackles for loss.

“Our defense was really strong tonight,” Osman said. “We could improve a bit on our passing plays and a bit more on our offensive side, but our defense held strong.”

Much of the Islanders’ offensive struggles were due to the torrential rain, as the Mercer Island pass-catchers dropped many balls that might have been caught had the weather been more ideal.

“I don’t think rain is a good excuse for losing a football game,” Osman said. “Everybody has to play in the rain, and we’re pretty used to playing in the rain at this point living in Seattle.”

The Islanders will look to bounce back from this loss in their next game against Hazen.

“With COVID-19, there’s no playoffs or anything so we only have two games left,” Osman said. “We’re just gonna come out, win those games and finish up the season strong.