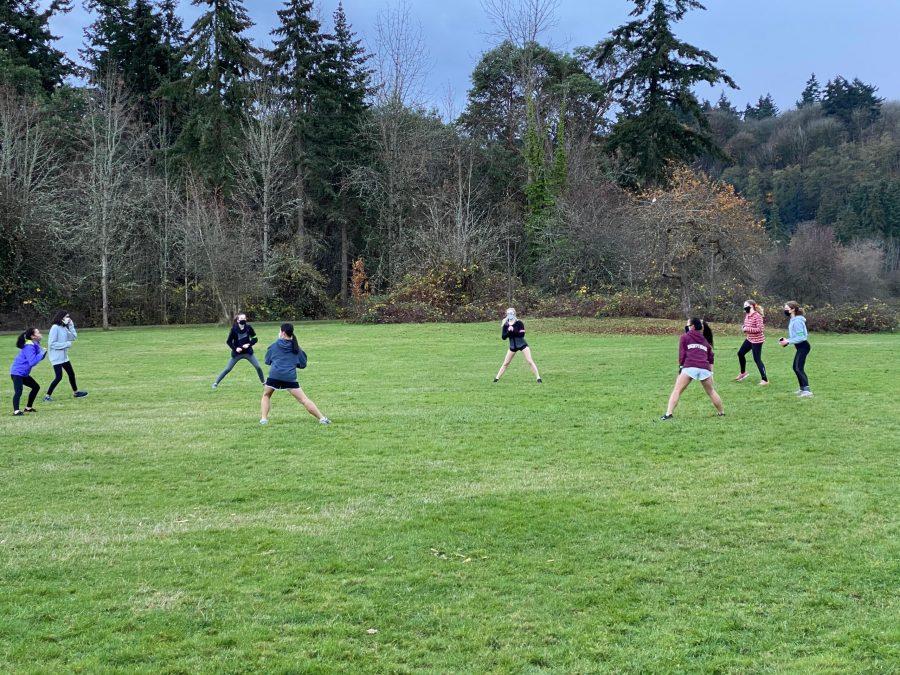 The Mercer Island Boys Tennis team said they are more than ready to get back on the court. While slippery conditions in the winter had stalled players’ ability to practice in pods, the team will go into the season with high expectations. “Our goal is probably just to go undefeated,” captain Jack Mattox said. “I think we have a really good team and a chance to do that [since] we have a lot of good freshmen coming in this year.” Since tennis is mainly an outdoor, distant sport, COVID-19 will not hinder the major aspects of the season. However, certain social components, such as bus rides and team dinners, may not be possible. “The social aspects [are] going to go away a bit because we are probably going to be practicing in smaller pods,” Mattox said. “[But] it’s my last season of high school tennis, so I’m going to try to get to know all the guys as well as I can, and hopefully we can [still] have a good season.” With these objectives in mind, Boys Tennis will be a team to look out for in March.

The MIHS Football team aims to improve from last year’s 3-6 win/loss record in this COVID-impacted season. After losing close to 20 seniors last year, the current juniors and seniors are excited to take over new roles, even with a shortened season. “There are no playoffs or championship games this year, so we want to have the best record in KingCo, and beat Bellevue of course,” senior captain Luke Shavey said. The team has been practicing outside two to three times a week since the end of October, with masks on and without pads or helmets. “Our team mentality is getting a bit impatient,” Shavey said. “It’s been a while since I have gotten to play in pads and with the season hopefully around the corner, I can’t wait to finally suit up and hit some people.” With their first game scheduled for March 12, the football team is ready to make the best of whatever shape their season takes.

With an emphasis on morale as well as performance, Mercer Island Girls Swive is determined to stay positive this season. Both swimmers and divers started preseason practices early on in February, which have been beneficial both for getting into shape as well as fostering energy and spirit on the pool deck. “My personal goal for this year is to create a fun and exciting environment, [and] to show girls who haven’t been on the team before what Swive is all about,” swim captain Katie Williamson said. While COVID-19 will limit the number of swimmers and divers in the water and increase the distance between them, practices should remain generally unchanged. “I think COVID won’t affect swimming and diving as much as it might affect other sports,” dive captain Ally Lavin said. “We are never huddled close enough to transmit anything and practices are outside for the time being.” Even with a shortened, five-week season, the athletes’ positive attitudes should help them succeed going forward.

Although Mercer Island Cross Country might seem less impacted by COVID-19 than other sports, the team has endured many frustrating changes. “Starting back in November we have held pod practices and have been meeting in these small groups up until this January,” senior captain Hunter Evans said. “At the end of January, we were given the opportunity to meet in a group of about 30–with masks, outside, socially distant.” During races, teams may be forced to run at different times on the course so that everyone stays distant from each other. However, while runners will still need masks during practices, they will not be obliged to wear masks during competitions. “Wearing masks definitely makes it harder for me to perform at my best, but I enjoy getting outside and seeing familiar faces at the end of a long Zoom day,” Evans said. Because of COVID, the season will only be about five weeks long, which will be significantly shorter than normal. However, even with a reduced number of meets, the team is excited and hopeful to see where their season takes them.

After failing to advance to state last year after an overall strong season, the MIHS Volleyball team will work hard to improve and replicate last year’s successes. “One thing I want the team to take away from last year and learn from moving into this year is how much of a mental sport volleyball is,” head coach Carmen Vasilatos said. This season will be Vasilatos’ first year as head coach after previously serving as an assistant coach. However, this change in leadership is not the only thing players will have to adjust to. Aside from mask wearing and physical distancing, the team’s schedule is very uncertain and will not include a postseason, which makes goal setting difficult. “Since we don’t even know what teams we are going to be playing yet, it would be great to have an 85- to 90% win rate,” Vasilatos said. Even with these changes, the Volleyball team should be in for an exciting season.

Even with shortened practice time and a long hiatus since their last game, the Mercer Island Girls Soccer Team is up for the challenge. “Our goal is to have fun and to play as much as possible,” senior captain Emily Yang said. “Especially for the seniors, it may be one of our last opportunities to play the game with our friends and family watching — even if from a distance.” Moreover, COVID-19 has added a new perspective to this spring’s season. Because of the lack of social activities like in-person classes and clubs, Girls Soccer is more excited than ever to have the opportunity to play. “As for our mentality, a lot of players are just relieved we get to play — the pandemic has made us realize how much we took for granted,” Yang said. COVID-19 has brought about changes in the season such as mask requirements, a weeks-shorter season and undetermined schedule. However, most of the girls would agree that having the chance to compete makes the changes to their sports worthwhile.

After winning last year’s district championship tournament, Mercer Island Boys Golf, led by state champion Ethan Evans, is looking to repeat their victory this season.“Our goals for the season are to win the KingCo league, and obviously to not have a COVID breakout,” senior Jack Dilworth said. While the team will try to win as much as possible, there will also be a major emphasis on staying safe. “We want to win safely,” Dilworth said. “We need to stay level-headed, take care of safety and be smart, but go through the season with a winning mentality.” Even while being extra careful due to COVID, Boys Golf is ready to compete and face off against their opponents.