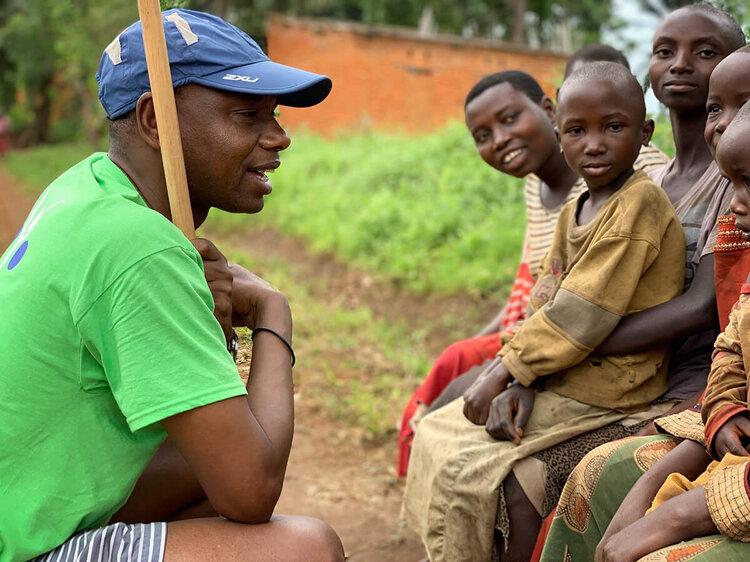 Running from genocide, Deogratias Niyizonkiza, affectionately known as “Deo,” barely escaped Burundi with his life, carrying only $200 and no fluency in English.

Niyizonkiza went from  homeless as a newly arrived refugee in the U.S. to improving the lives of the people in one of the poorest countries in the world.

In 1993, a civil war broke out between Hutu and Tutsi ethnic groups in Burundi and Rwanda. Niyizonkiza is Tutsi. After the hospital that he worked in was attacked, he began planning his escape from Burundi.

“[The escape] was a combination of relief and sorrow,” Niyizonkiza said. “[Coming to the U.S.] was a huge relief, and, yet, I came to a country where I knew no one and I didn’t speak the language.”

Niyizonkiza escaped to New York City with almost nothing and no plan. There, he stayed with a couple, Nancy and Charlie Wolf, who helped him with the expenses it took to enroll in Columbia University.  At Columbia, he earned a degree in biochemistry and philosophy.

After the war’s end in 2005,  Niyizonkiza returned to Burundi. He established Village Health Works (VHW), a medical center near his hometown of Kigutu.

In a year fraught with difficulty, one light shines through in Eric Adelberger’s life. Fresh off receiving the 2021 Breakthrough Prize in Fundamental Physics, he is taking time to reminisce and reflect on his legacy.

Adelberger, a professor emeritus in the University of Washington’s physics department, won the 2021 Breakthrough Prize for his work in the Eöt-Wash Group, which he founded in 1985.

Even with the early success of the project, the Eöt-Wash Group had their share of disappointment. One setback was especially disheartening, as the group had high expectations that were dashed because of an engineering error.

However, this excitement did not last, as it was discovered that? an engineering failure in the apparatus skewed the results.

“When we finally figured that out, then everything made sense. Newton was still right, but we were set back for many months,” Adelberger said.

As he eyes retirement, Adelberger is taking time to evaluate what he is leaving behind for the physicists of tomorrow. He has used a large portion of the money awarded to Breakthrough Prize winners to cement his legacy both within physics and outside of it.

The harrowing experiences of first responders during the pandemic are not for the faint of heart; victims of violence, abuse, and sickness, yet Covid-19 patients, without treatment blueprints, presented brand new difficulties.

Olivia Counihan, a frontline nurse originally from Mercer Island, is a graduate from the University of Washington. Counihan started her professional career as an ER nurse for a hospital in downtown Seattle. Two years later, her department became the first in the U.S. to deal with confirmed COVID-19 cases. With little knowledge about the virus, there was a lot of uncertainty from the beginning.

“We were really prepared for when it first started … but now that it’s been so up and down it’s hard to prepare for those ups and downs,” Counihan said.

Interestingly enough, Counihan made a decision to change her life, as she accepted a job proposal in Chicago. She accepted a position in an inner-city hospital on Chicago’s south side.

“Unfortunately, the population I work with now is a lot sicker as a whole, like chronically sick, and their outcome with COVID is documented to be a lot worse,” Counihan said.

Seeing more at-risk patients, Counihan feels more like a critical-care nurse now than she had in Seattle, which has increased the intensity of an already high-stress job.

Elizabeth Melton, an MISD kindergarten teacher, expresses her feelings on this year’s class of students, and the obstacles the MISD kindergarten staff has to overcome to give their students the best education they can.

The Class of 2033 started their academic journey virtually this fall.

“[My students have] been able to make it work,” Melton said.

A major concern that Melton and her colleagues had at the beginning of the year was how her students would develop connections with each other. Because Mercer Island is a small community, these relationships are vital to student social and academic success.

Melton reflected on her worries in the first semester of the school year, when many of her students were forming friendships.

“[For example], how will we get them to talk to each other? They [will] have best friends already,” Melton wondered.

One benefit to online learning for Melton’s students is the ability to take a break when overwhelmed, and be in the comfort of their own homes while simultaneously getting accustomed to an academic environment.

Melton has now welcomed her class through a transition to in-person learning with MISD’s current hybrid model.