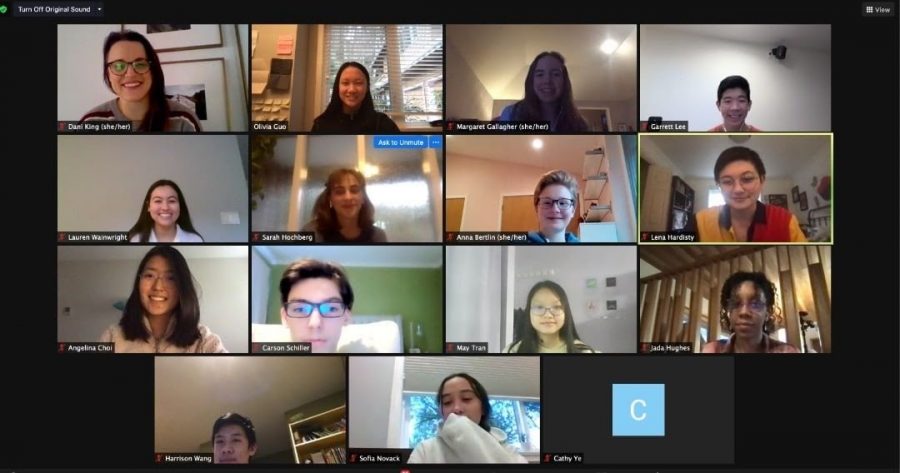 The Education Coalition for Asian American Representation (ECAAR) is a high school club that was formed with the goal of educating the public on Asian American history.

Formed by Co-Presidents Garrett Lee and Olivia Guo over the 2020 summer, it works on advocating for a more inclusive history curriculum, creating a seminar about Asian Americans for the Mercer Island community, and other projects around research and education about Asian Americans and Pacifc Islanders (AAPI).

“Our main goal for this year is to put on a seminar to educate people about Asian American History topics generally untaught by the  school district,” Guo said.

ECAAR has been working all school year to prepare for the seminar, which will occur online in partnership with the King County Library System during February and March.

“I had never thought about how much work it [takes] to put on a seminar, or a guest speaker event, but now I understand that it takes months of planning and organizing to put together,” Guo said.

The students in the club research various topics related to Asian American history and representation for the seminar and other projects.

“I’ve learned a lot more about AAPI history, namely the Vietnam War and the benefits of ethnic studies because those are the topics I have been researching,” Guo said.

Many of these topics are not taught extensively in MISD curriculum, and oftentimes not touched on at all.

“I’ve learned a lot about actual history, but even more about what’s lacking in the history curriculum,” said Anna Bertlin, the secretary of ECAAR.

ECAAR has decided to tackle this issue by collaborating with teachers to implement more Asian history in their curriculum.

“We’re working with the high school history department to push the implementation of the Pacific Theater into the 10th grade Modern World History classes,” Guo said, “Since 10th grade history is both required and not under the pressure of an AP exam, we are starting there.”

Though they do have some curriculum standards, teachers have some leeway with what they teach. They are often accepting of the push to include a more diverse curriculum.

“I have continued to add to this WWII curriculum and have tried to incorporate a more global perspective throughout my 10th grade class. Hearing from students like those in ECAAR encourages me even more to keep adapting my curriculum,” said Susan Rindlaub, a 10th grade history teacher.

ECAAR also hopes to push through more curriculum change in the future in other grade levels, and even on the state level.

“Eventually we hope to work on some actual legislative change,” Bertlin said.

Through pushing education and representation, ECAAR hopes contribute to a more inclusive and tolerant community.

“Education is one of the best ways to combat hate,” Guo said. “That is what motivated me to get involved with ECAAR.”

The club has an ambitious future ahead, and it is off to a promising start. At its core, it’s a community of diverse yet like minded individuals with a common goal of increasing the education surrounding the issues and stories of Asian Americans.