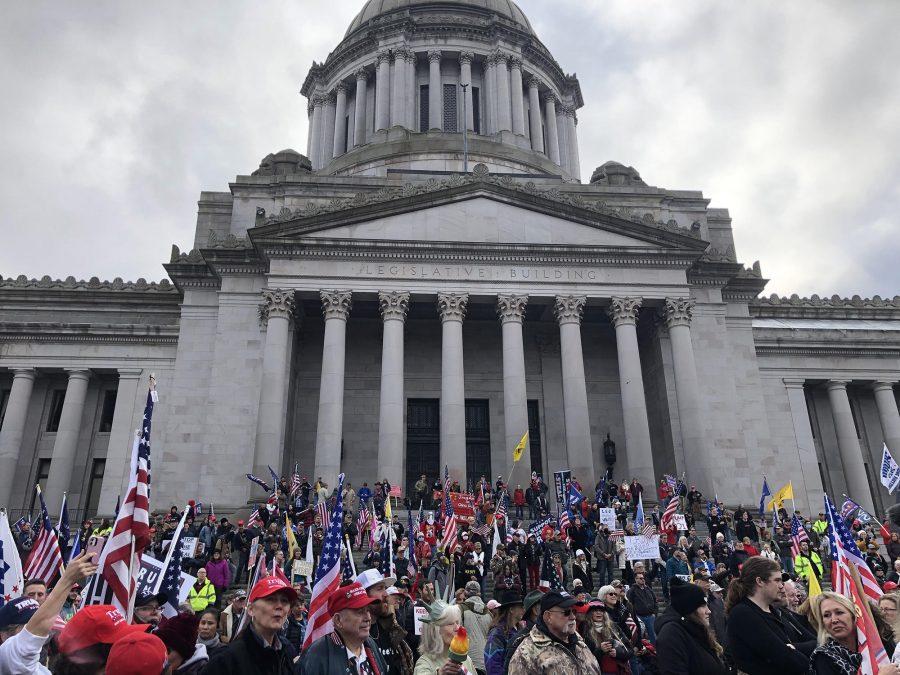 Washington state lawmakers are aiming to tighten legislation around paramilitary groups because of the increased presence of armed protestors at the State Capitol Building.

Representative Tana Senn (D-Mercer Island) is among the group of legislators concerned by this uptick in armed protests.

During the 2021 session, Rep. Senn will propose legislation that she argues will provide a much-needed tightening of state laws pertaining to private militias.

“Basically, we’re now saying that it’s criminal mischief if you’re together with three or more people […] and you openly carry or display a deadly weapon in a manner that would lead a reasonable person to feel threatened,” Senn said. “Instead of making this about the intent of the person, it’s about the reaction of the victim. [This makes the law less vague] and more implementable.”

Senn contends that her bill is necessary because enforcing it does not pertain to the intent of the perpetrator, but rather to the reaction of a “reasonable person,” making this legislation a helpful and concrete addition to the current laws.

While the open carry of weapons is legal in Washington state, opponents of the statute argue that it is threatening and dangerous, especially at protests where tensions can run high.

Washington state, like many others, already has laws in place designed to prohibit the formation of private militias. However, many of these laws have been ineffective as neither prosecutors nor police have been able to enforce them.

“There’s a [line in the current law restricting private militias] that says a person guilty […] of knowing or having reason to know or intending that [weapons or training] will be unlawfully employed in furtherance of a civil disorder,” Senn said. “The key part is that it’s hard to [prove] that someone is intending to do something.”

However, in the actual prosecution of the prospective legislation, there is a possibility that law enforcement would not move to aggressively carry out these new laws.

“There were plenty of opportunities [to enforce the pre-existing laws], like people marching during Black Lives Matter who were clearly a militia– and the cops just let them on by,” Senn said.

Police conduct, especially in the summer of 2020, drew ire from critics because of the forceful handling of peaceful protesters and their perceived hands-off approach to militia members.

Senn emphasizes that getting the necessary officer compliance and enforcement for this potential new law could be challenging but that she believes it’s possible.

Senn was inspired by lawmakers in Virginia, who recently passed a law that strongly curtails private militia groups. But another factor that pushed her to introduce this legislation was watching armed protestors roam through the State Capitol building during the 2020 legislative session.

“In February 2020, one day there were 100 or so heavily armed Washingtonians who came to the State Capitol with automatic weapons on their back,” Senn said.

“They came to the legislature and they were just freely roaming around the Capitol. There were school groups, there were families […] who would be walking in the hall and here comes this guy with automatic weapons. […] That’s not how a democracy is supposed to work. It’s not supposed to be by violence and intimidation.”

In the future, Senn hopes that Washington state lawmakers will focus on improving gun laws and regulation beyond I-1639 and her new bill.

“Long term, I would love to see banning open carry [of guns] in Washington state.”

However, in the short term, Senn is confident that her bill will provide immediate safety to Washingtonians.

“[This legislation] is a deterrent,” Senn said. “By ensuring that people can be held accountable for their threats, we’ll hopefully reduce people’s interest in even going out in public with their assault weapons because they know they could be arrested. […] We want to keep guns out of emotional situations.”