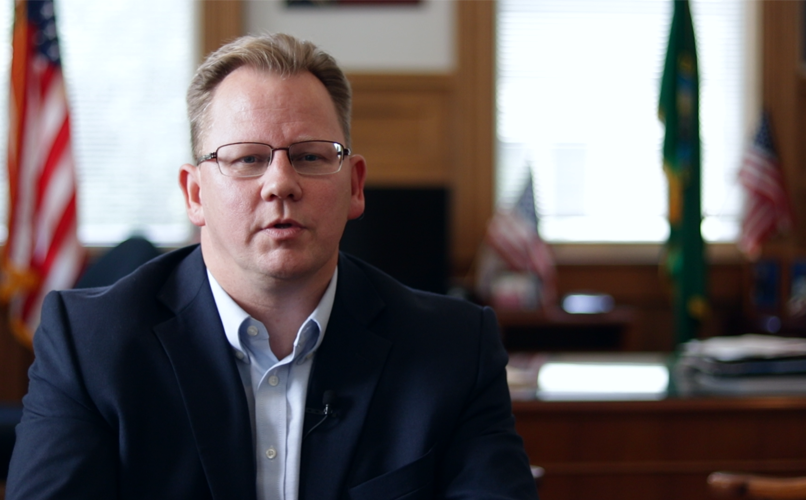 On the impact of a vaccine on reopening plans

“[A] lot of districts are now talking about [reopening in] the early part of February,” Reykdal said.

He indicated that increased testing, not vaccines, will allow school districts to continue with their scaled reopening processes.

“[There] isn’t enough confidence yet that there isn’t spread within [schools], so the first thing we’ve gotta do is figure out if the governor can come up with tests,” Reykdal said. “COVID testing, even if it’s random, will create that confidence that whatever’s happening in the community isn’t spreading in the same way in schools.”

The OSPI Superintendent cautioned against a rapid reopening of restaurants and bars as the vaccine is in the early stages of distribution, saying that Washingtonians must be patient until a large majority of the population is inoculated.

“[We] run the risk of spreading this thing very aggressively on the shrinking population who [do not] have the vaccine.”

Reykdal also indicated that future COVID-19 vaccination requirements are not up to the OSPI.

“[The] legislature is going to grapple with that this session [beginning in January 2021],” Reykdal said. “Right now, we have some vaccines required for admission particularly to kindergarten and beyond, but there is still a religious and medical exemption, even for those.”

“That’s the current law, and that’s what the COVID [vaccine] would fall under unless the legislature acts differently.”

Reykdal acknowledged that there was a chance that the legislature could potentially change the law, especially given the deadly nature of the virus.

He also predicts that the question of vaccination requirements for staff will be more complicated than for students due to labor laws.

On OSPI recommendations for student wellbeing in the virtual classroom

“[Public] health [concerns] drove us out of our classrooms, and in many communities [COVID-19] is just absolutely raging and getting worse, quite frankly, as a community threshold,”  Reykdal said. “It doesn’t mean that remote learning is a particularly easy switch to flip, and it’s not working for a lot of students.”

Reykdal reiterated that distance learning is different from in-building instruction, and called on teachers to adjust their plans to compensate for this disparity in socio-emotional connection and instructional ability/time.

“[Educators need to] cover less material, focus on fewer standards, transition [their] grading system from one that grades tasks and homework and volumes of activities to really assessing if students know and can demonstrate key learning standards and concepts,” he added. “We saw a lot of amazing educators make that switch, but many of them couldn’t and didn’t, so now we’re seeing unprecedented Ds and Fs.”

“[The] best thing we can do is get the virus under control, get more testing. Obviously get a vaccine and get schools open. That is the very best outcome we can [get], is get to school in a way that is safe and sustainable.”

On Core24 and graduation credits

“I do think you’re gonna see some flexibility this year by the legislature on the 24 credits,” said Reykdal.

He added that he wants this change to be made permanent to help students graduate in 2021 and beyond, crediting the newer versatile guidelines for the improved graduation rate in 2020.

“This state has to think about whether it’s gonna keep obsessing about 180 days of school, or 1000 instructional hours per year, or 24 credits, or high stakes tests,” Reykdal said. “We actually do all four, but none of it actually says if a student can demonstrate what they know, even if they don’t sit through all the days or all the hours or all the credits.”

“[We] have a lot of seniors struggling with credit and passing grades. They’re gonna have to do some pretty extraordinary stuff this year,” he said. “I will run through glass for them to think about flexibility and driving resources, particularly in the second semester, for students who need it the most.”

On racial equity in virtual learning

“As we now think more about reopening, it now turns to how can we more formally assess who is disproportionately impacted.”

Reykdal emphasized the continued importance of assessment-based learning and proper distribution of resources to struggling communities.

“Not formal testing, but evaluating […] both academic and socio-emotional needs.”

He also pointed toward income inequality as another barrier exacerbated by distance learning.

“[Any] time you talk about connectivity, you talk about the privilege that comes with buying private tutoring and additional supports, income inequality is always going to be a factor, and that of course parallels always with racial inequality.”

Reykdal said that educators also need to address the “lack of connectivity, and put their resources, their time and their in-person opportunities disproportionately on students who need it the most.”

On the fiscal impact of COVID-19 for schools

“What we’ve tried to get lawmakers to understand before they come to session is that this is a temporary crisis that we haven’t seen in 100 years, so we don’t want those impacts to be setting districts back or students back.”

Reykdal said that the OSPI is seeking to restore the budget for the 2020-2021 school year, so that there is funding to protect safe reopening and comprehensive student support over the summer.

He expressed confidence that school districts would get their 2020-2021 funding back, but added that legislators are aiming for a more intentional approach to helping students disproportionately affected by the pandemic.

“We’re gonna get a lot of money restored, we’re gonna be reinstalling some cuts, but there’s gonna be a big expectation that we close gaps, and that’s exactly what our policy makers should focus on.”

On the future of standardized testing

Reykdal recognized that standardized testing is less important in Washington state compared to the rest of the country, as scores here have no effect on teacher salaries and students are not automatically held back based on their results. However, they are required under  Washington’s High School and Beyond Plan, which must be completed to graduate.

“[Short] term, [we want to] have teachers continue to use classroom-based assessments to know [which] students are really struggling disproportionately, and focus resources there.”

In the future, Reykdal hopes that the “testing regime” in the United States will be overhauled. His concerns with the current system include the nearly $1 billion per year price tag and the lack of progress standardized testing creates.

On long-term changes as a result of COVID-19

“[Many] districts will pick a second option besides in-person learning,” Reykdal said. “It’s been kind of hard to get the systems to embrace that learning modality, and I think you’re going to see a permanent retention of that in a lot of places. And I think that’s a good thing, more options for students.”

Reykdal also said he is working to get technology connectivity designated as an educational right. He added that he wants the state to take responsibility for families who cannot afford internet services.

“Online learning, even in a face-to-face environment, is essential [..] so there’s huge changes coming and I’m excited about them.”

On Referendum 90 and diversifying health education

“The language that [the OSPI] wrote was very specific to include a recognition of civil rights, so the LGBTQ youth and all of those who are in a protective class in the state of Washington,” Reykdal said.

He emphasized the popularity of the bill, which had the largest margin of victory among any of the partisan races in the state.

“[In Washington], we were the first state in the United States of America to have a sexual health education bill get enough signatures to go to the ballot so that the voters could take a direct role in it.”

Reykdal noted that this legislation was created after the results of the Healthy Youth survey reported disturbing numbers of sexual abuse, sexual assault and unwanted touching. The Superintendent, who endorsed Referendum 90, believes that these incidents can be combatted through comprehensive sex education.

Reykdal noted the particularly high level of support among young voters and is glad to see student voices find success at the ballot box.

“[We] expect a huge kindergarten class next year,” Reykdal said, attributing the abnormal class size to low 2020 kindergarten enrollment during the pandemic.

“It means staffing differently. Forever, the grade ahead of them will be small, so it means you’ve got to start shifting some of these teachers,” he said, noting that many elementary teachers have dual certifications that allow them to teach multiple grade levels.

“We permanently passed class size reduction legislation and funded it, so you should expect those class sizes to remain as low as they have the last couple of years,” Reykdal said.

He acknowledges that there will still be a transition as school districts and the OSPI figure out how to best address switching staff around.

“The Class of 2034 will be by far the largest graduating class in the history of our state.”