MI Community Differs on How to Reopen Schools 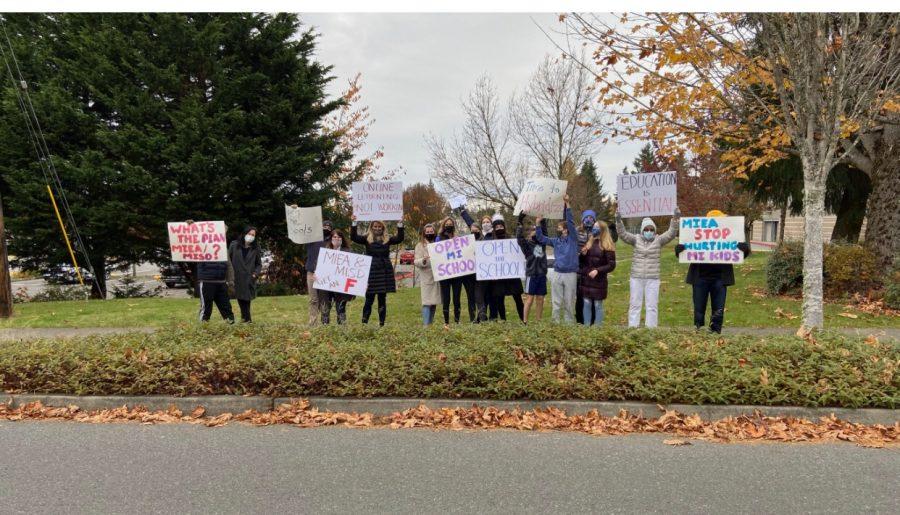 MI Parents in Support of Safe Education at an in-person rally to reopen schools.

Online learning is a change for everyone, and has had both positive and negative effects. Because of varying experiences with the efficacy of remote learning, some students and parents support the District’s “red” learning model, while others push for a hybrid, or even all in-person model.

Currently, MISD remains closed to in-person schooling for the majority of students. Although the District planned to introduce Kindergarten to an in-person model this December, this plan has been postponed until January.

Although Gov. Jay Inslee’s new regulations surrounding in-person gatherings do not apply to public schools, this decision to postpone in-person learning is still needed, according to Superintendent Donna Colosky.

“Though these restrictions were not directed at public schools, we also heard … that our local health system is under strain,” said Colosky, in a published letter on the MISD website about the updates to in-person learning.

Kim Morelli, a middle-school parent on the island, is a member of MI Parents in Support of Safe Education, a group of parents that pushes for the Mercer Island School District to reopen for in-person learning.

The group, recognized by the name of their Facebook page, currently has 200 members who share the goal of raising awareness for what they believe is a necessary change in MISD’s policy. They advocate for a hybrid learning system, and their recent Change.org petition, “Open the Schools on Mercer Island!”, has garnered over 1,000 signatures in about a month.

Since the group’s inception, they’ve held two in-person rallies, sent hundreds of letters to District officials and spoken at a November School Board meeting.

Morelli is not alone in her beliefs: many students on Mercer Island feel the need to return to school because of the obstacles presented by online learning.

“Learning online is just not working I think for a lot of students,” senior Muhammad Kazeroonian said. “People are just not learning a lot from what I can hear and from what I can see. It’s physically impossible to fit the whole curriculum into basically half the time.”

Conversely, there are also a number of students and parents who believe that reopening MI schools is unsafe at this time.

“It’s not safe. I want to go back just like anyone else but people are literally dying,” senior Annika Vanderspek said.

When asked in a recent survey of 157 MIHS students, “Are you in favor of the Mercer Island High School building reopening for all students/creating a hybrid program at this point in time?,” 83 respondents (53.2%) responded “No.”

“Although I wish we could have in person school, or even a hybrid program at this point in time, it’s simply too dangerous not only for the students and staff but everyone that students and staff interact with due to the rising COVID-19 cases in Washington [and] the rest of the United States,” one student said. “This issue is simply bigger than us and we need to do everything we can as a community to ensure everyone’s safety so that sooner rather than later the possibility of a hybrid program is tangible.”

“If there is every a time to be better safe than sorry, the middle of a worldwide pandemic is that time,” said another student.

Morelli, however, said she believes MI schools have no excuse for staying closed.

“We know that the safety measures can be done and taken care of,” she said. “We are a very affluent neighborhood, we have our own school district, and the majority of us have the means to do what the school asks [in terms of safety measures].”

Colosky acknowledged that although some districts have opened in other parts of the country, “many [of these districts] are now going back to remote learning.”

Morelli’s personal experience with remote learning is what motivated her to start the petition.  Her daughter, who is an incoming sixth grader, has been forced to transition from elementary to middle school virtually.

“I’m sure [MISD] has a different perspective,” Morelli said. “From a parent’s perspective and a child’s perspective, [MISD] get[s] an F. Zero. It’s not working.”

Remote learning has also been disappointing for some seniors who looked forward to a ‘traditional’ last year of high school.

“My first main reaction is ‘We’re all seniors, we’re not going to get our senior experience,’ … I feel like just being social and socially distant in the classroom, [will] bridge the gap that COVID has caused throughout the spring and summer,” senior Cam Longwith said.

Both Longwith and Kazeroonian said they believe schools can and should be safely reopened with a hybrid model that will satisfy everyone.

However, some say that a hybrid option could have the effect of ostracizing or disadvantaging students who “opt out” by staying at home.

Another concern with hybrid learning is for those who may wish to return, seeking the social and academic benefits, but feel hesitant due to uncertainty.

“If we move to a hybrid program or reopen, I would like it if some things could be clarified about what they would look like,” said an MIHS student in response to the survey. “I am immunosuppressed, so I would wonder what the school would do to identify and help protect more vulnerable populations.”

“The other students aren’t doing amazing at keeping masks on so it’s worrisome especially when I have a family member who is at high risk,” said another student.

Some, like Vanderspek, say that switching to a hybrid system also has the potential to adversely affect mental health at this time.

“We’ve all spent these last six months or so, getting used to this platform, from the end of last year to the beginning of this year, adapting and getting used to the online school platform and I feel like we’re finally kind of learning how to manage it and get comfortable with it,” Vanderspek said. “I think the hybrid model would just really throw people off and that would just be a huge shift in routine and I think right now all we kinda need is stability.”

“If I’m in a classroom learning, trying to take notes, I don’t want to have to be thinking like is this person sitting next to me going to be putting my family and me at risk. That’s such a huge added stress that is not conducive with learning. That would be really hard,” Vanderspek added.Another survey participant mirrored this statement: “When we go back to school, I want to go back to school, not somewhere in the middle with no true benefits.”