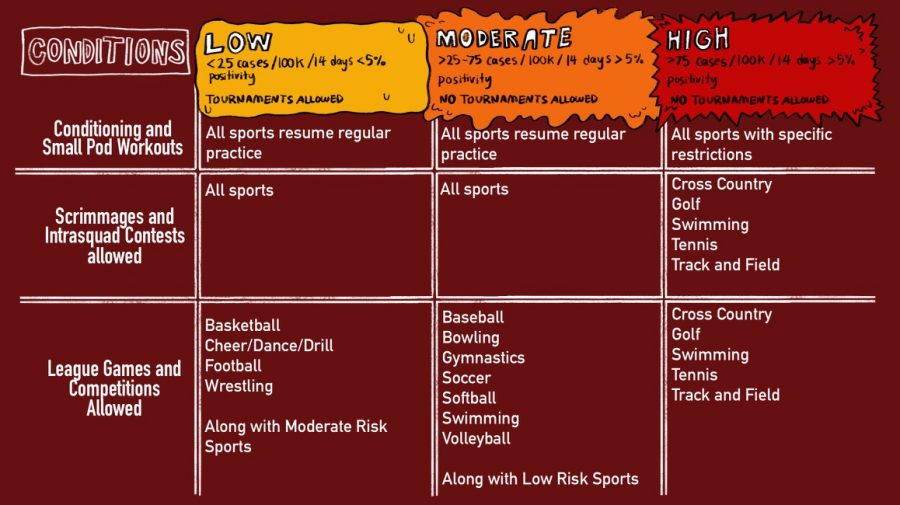 With COVID-19 regulations in place, MIHS Athletics are going to look significantly different this year.

While all proposals are currently tentative, the athletic department has laid out a plan for sports seasons once teams are allowed to resume their activities.

“For the start of this school year, we are not immediately offering sports, but instead looking to get started with our traditional winter season at the end of December,” athletic coordinator Kyle Mckenna said.

The winter season will be referred to as Season Two. Season Three will then take place in late February/early March, consisting of the traditional fall sports, followed by Season Four in early May for all of the typical spring sports.

If sporting events do eventually occur during these respective seasons, safety precautions, such as limiting the number of fans, may potentially be put in place.

“Whether fans will be in attendance for sporting events and other activities will need to be consistent with the regulations by district, state and local authorities for gathering and matching up with the phase that we are in,” McKenna said. “As extra-curricular activities are an extension of the school day, we will work within the precautions that we have set up for in-person school.”

These precautions include wearing masks, using hand sanitizer and distancing six feet from others when possible.

“With the season in jeopardy, I might not get the opportunities that I would like to have,” senior athlete Luke Shavey said. “I am hoping to have a great senior year in football to help with recruiting, but I basically have to wait until early spring to begin sending highlights to college coaches.”

Athletes like Shavey face an even greater competitive disadvantage since high schools in different states across the country, unlike MIHS, are open and playing sports, giving students at those schools more recruitment opportunities.

Additionally, with the three sports seasons being condensed into a limited timeframe, athletes who play back-to-back sports, such as runner/wrestler/pole vaulter Connor Pettigrew, may not have the usual hiatus between seasons.

“Usually I get a little bit of break time in between each [sport], to just kinda relax and focus on school for two-three weeks,” Pettigrew said. “It’s kind of like a vacation from sports, which is usually nice.”

Despite the various downsides that come with modified school sports, having any sort of normalcy should serve as a relief to athletes who have not practiced together since last spring.

“In light of everything that is going on, just having an opportunity to have a football season in the school year is a blessing,” football head coach Ed Slezinger said. “If you think about the impact on the 2020 Senior Class where events and sports were lost, it is welcomed and warranted that we do all we can to make the year as “normal” as possible.”

The postponed athletic season will also provide new athletes with an opportunity to compete and embrace the community aspect of high school sports.

“I’ve fallen in love with the cultures of the sports I have participated in, and so probably one of the biggest pieces of advice I can give the freshman is: don’t give up hope on these sports,” Pettigrew said. “I’m really hopeful that these communities will kick back up [and] it will be a really exciting time.”

Mercer Island Athletics are a fundamental element of MIHS culture, and students have unquestionably felt the absence of sports since last March. Even though athletics will not look like they have in past years, they are definitely something that students can look forward to.