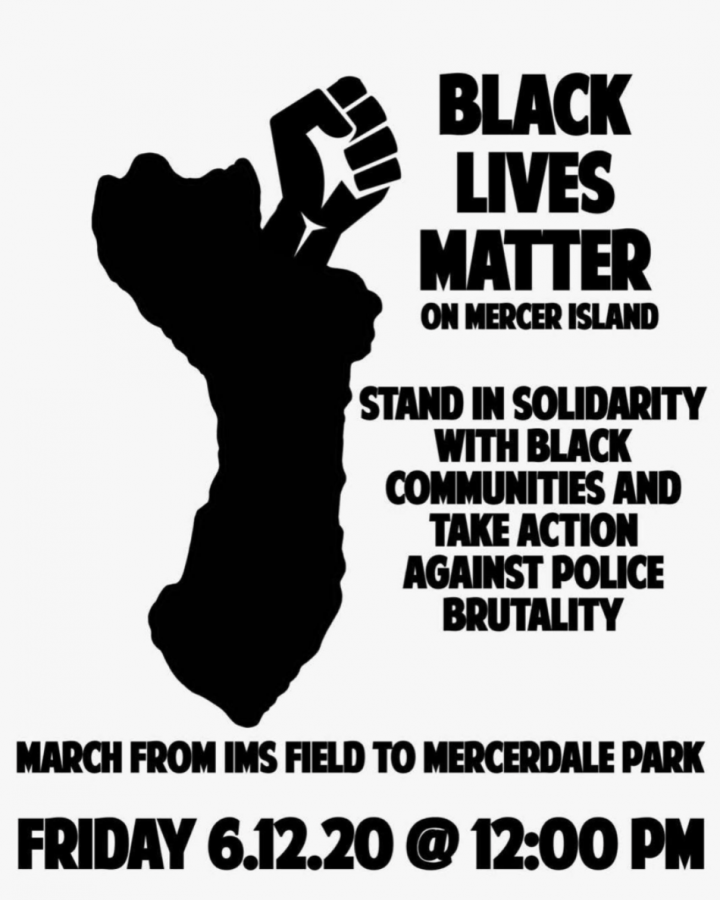 The U.S. has mourned the death of George Floyd after his murder by the police. In many major cities, protests and marches have reached their twentieth consecutive day.  Racial injustice and police brutality has sparked a nationwide motivation to speak out and demand change, even on Mercer Island.

Friday, June 12, hundreds of Mercer Island residents gathered to march for the Black Lives Matter movement. As the rain poured, marchers marched and others stayed socially distant yet supportive alongside the streets, holding up signs. The event was primarily organized and led by MIHS students.

The march started at IMS and concluded at Mercerdale Park. At the intersection between Island Crest Way and 40th street, protestors kneeled for 8 minutes and 46 seconds – the fatal length of time that the police officer knelt on Floyd’s neck.

At Mercerdale, numerous speakers , scheduled and those who took advantage of the ‘open mic’, shared insight into how their lives have been impacted by racism on Mercer Island.

“I’ve experienced microaggressions since I was a little kid,” former MIHS student Nia Tate said. “I straightened my hair almost every day and cried to my mom about being judged.”

One of the keynote speakers, Mercer Island resident Reverend Wayne Perryman, spoke to another cultural norm that stems from racial oppression.

He further spoke of the hypocrisy of the American media and numerous politicians for condemning former NFL quarterback Colin Kaepernick’s kneeling protest as an injustice to the flag, especially given that the NFL tradition is itself against the flag according to the U.S. flag code.

“They didn’t realize that every time [the NFL] stretches that flag across the field and displays it in a horizontal fashion, that’s against the United States flag code. They don’t teach our kids that.”

Junior Emily Yang is one of several students who helped to organize the silent protest.

“As someone who’s not black and who lives in a predominantly white community, this movement means that I need to acknowledge the privilege I have and use it to educate my peers and self and ultimately push for a better future.” Yang said. “This isn’t just a protest; it’s sustained change that we want to implement on Mercer Island.”

In attendance were a number of students, staff and even administrators from the district office who came to support, learn, and listen.

“I hope that my attendance sends a message that we support Black Lives Matter on MI and changes the system for the better,” junior Kelly Hillard said.

“I feel like racism, especially in a predominantly white community, isn’t really talked about enough, or at all,” freshman Lainie Wion said. “Just us being three extra people adding three extra numbers [here] is growing the voice and making it louder spreads the message.”

To fight and help others speak out against police brutality, senior Rena Zhang attended the silent march on Friday. “[I am here] to give the people who don’t have a voice a place to speak out and make way for them,” she said.

“I strongly encourage Mercer Island students to join the Facebook group dedicated to the protest — Mercer Island Black Lives Matter Protest — to listen to the speakers’ powerful messages from the protest and find more resources, such as our demands and organizations to donate to,” Yang said.

Here you can find an PDF of the march’s list of demands.