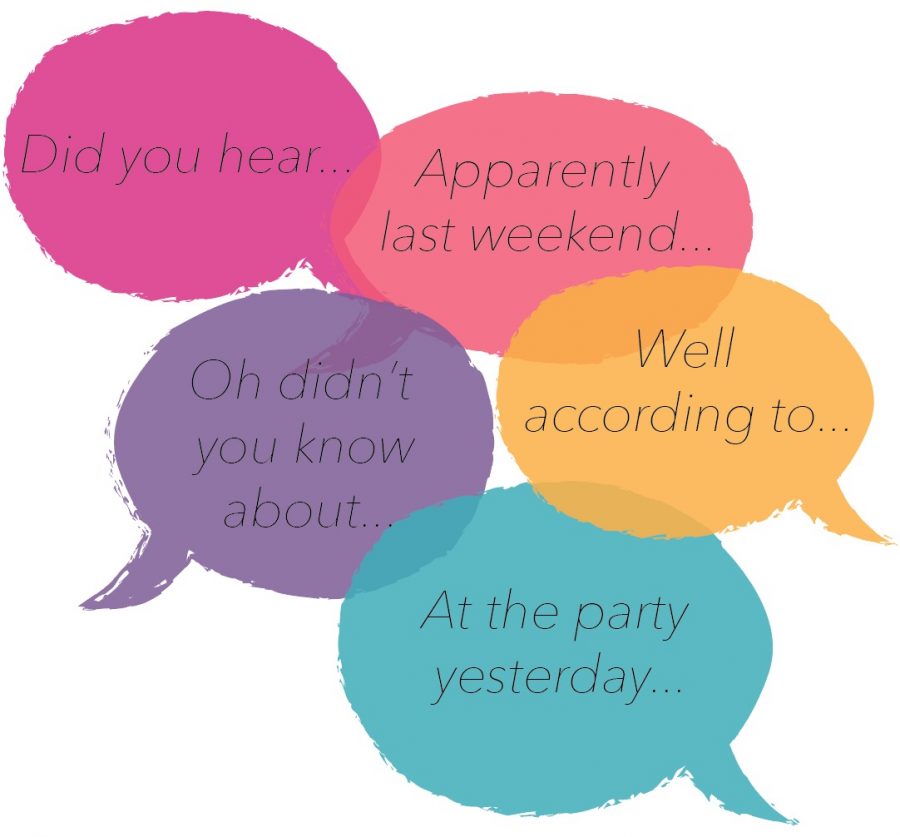 Gossip and rumors define the social dynamic of Mercer Island, with children, teens and adults alike engaging in its spread.

On the Island, particularly at the high school, there is a desire to know the details about everyone else’s lives.

“Talk can be about drama, relationships, friendships, breakups and everything else in between,” freshman Mimi Hartman said.

As with any high school, MIHS has a gossip epidemic, and existing in a small community does not help the case.

“Social media is a huge contributor,” junior Michelle Travis said. “Through platforms like Snapchat, rumors get spread so quickly and so easily.”

Rumors are not just limited to school. Weekend activities and parties are shared and talked about online, creating a tricky web that can lead to misperception.

“The rumors themselves have not changed so much since I was a student, but the way they get around has,” said Image teacher Lori Emery who graduated from MIHS in 2009.

The development of technology has greatly altered the gossip culture on the Island. It is also the community’s general wealth, as well as its proximity to Seattle’s tech hub that allows for the majority of students to have access to constant online communication.

“In those schools, the students weren’t talking about who was getting a 4.0, but rather who was coming in and out of juvie, or who was pregnant,” Emery said. “The topic of the rumors was very different from here.”

The subjects of rumors vary greatly from district to district and issues that are important to one community are not always as relevant to MIHS students.

There is also a general consensus among the student body that rumors differ by gender.

“Girls just tend to be a lot meaner to each other than boys,” sophomore Lydia Wampold said. “While girls seem to overreact more to gossip, boys play it off more subtly.”

Most female students seemed to share a similar stance, acknowledging this notable distinction.

“There is a big difference, especially with rumors regarding sexual topics,” senior Gracie Burke said. “It is treated as more of a scandal when referring to girls, while boys are getting praised for that sort of thing.”

This double standard ultimately contributes to fostering insecurity among girls and fueling the spread of rumors among boys.

From a male student’s perspective, this disparity seemed to line up.

“I would say that the amount of gossip is greatly increased for girls,” sophomore Luca Palermo said. “To me it feels like guys just don’t spread as many rumors.”

This standard is not specific to Mercer Island, but is a major aspect of how the gossip culture plays out. Rumors can have many different faces: some good-intentioned and some mean-spirited; but the latter can harm students’ mental health.

“A lot of students at MIHS take medication for anxiety and depression and I think a lot of that is due to their peers and is induced by gossip and rumors,” junior Sophie Gottesman said.

Gossip is one of many factors that contribute to student stress at the high school. The Mercer Island School Improvement Plan for 2019-2020 hopes to address this, aiming for “a reduction in stress and anxiety in academics, socially and emotionally.” This can only account for a portion of student stress, however, as it would be nearly impossible to eliminate gossip on the island.

Gossip allows people to feel connected with the community, regardless of whether the information being exchanged is positive, negative or even accurate. This spread of word has become an integral part of the island.

“I think it is just the way things are. It has been like this forever,” Luca Palermo said. “The way word travels may have changed over the years, but the desire to spread rumors seems to have stayed the same. It is the human condition– or rather the Mercer Island condition.”