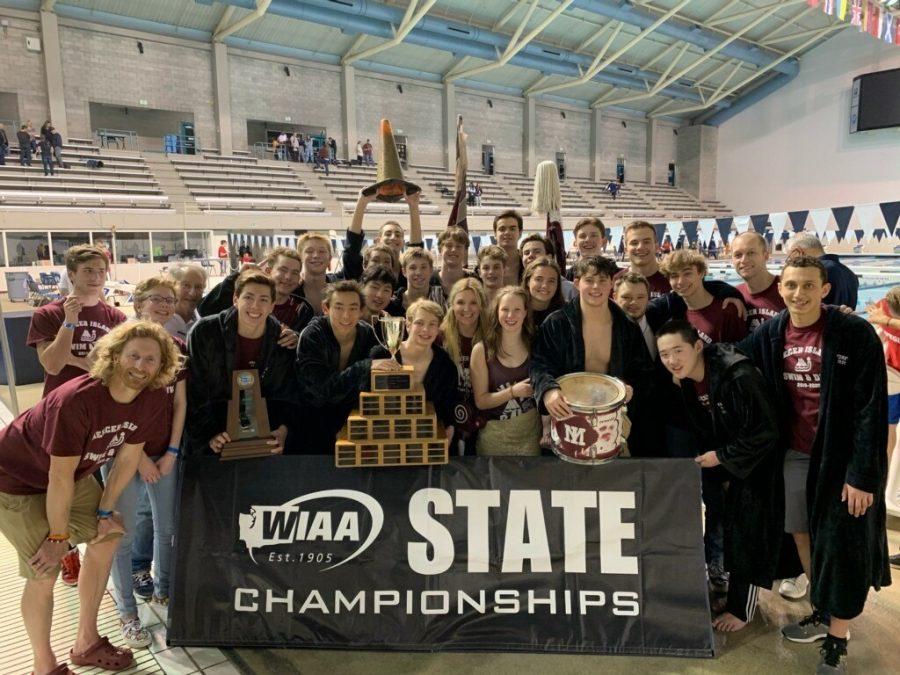 Feb. 2, Mercer Island Boys Swim and Dive placed first in the State Championship meet at the King County Aquatic Center, taking home their 10th state title and their first since 2014.

“I think to the program, this title means a lot,” captain Oliver Schaaf said, “Especially to the seniors who have been repeatedly beat by Bainbridge the last three years, being able to reclaim the throne really means a lot to all of us.”

“This year’s win was a good way of avenging these recent losses and continuing our programs winning culture,” said John Novak, who will be a team captain next year. “While swimming and diving may not be the most talked about sport at MIHS, I hope other students can celebrate our school’s victory.”

In addition to the state crown, Mercer Island put up dominant performances across the board throughout the season, both individually and as a team.

HIGHLIGHTS FROM THE SEASON:-First place at Kentridge Invitational

-First place at 3A KingCo

-First place at 3A SeaKing Districts

-First place at 3A State

To achieve this title, the team put in enormous work leading up to the season, allowing the group as whole to grow together.

“This year I felt the team really melded together and was able to grow stronger as a unit,” Schaaf continued. “Being able to swim for your teammates acts as another motivating factor when you dive into the pool.”

While a large portion of the victory can be attributed to the upperclassmen, credit is also due for the underclassmen, in particular the surprising freshman class.

“Our freshman class this year was extremely strong and I expect them to take a big step forward going into next year,” Novak said. “I had heard about how strong the freshmen class was before the season started but once I really got to realize how much potential they had after the first practice I thought that we had a good chance of winning.”

After a season’s worth of dedication to reclaiming the title, winning was an emotional moment for the team, especially the senior class.

“Everyone had the biggest smile and I felt a rush of happiness as I ran to hug my teammates,” Schaaf said. “It is a moment I will never forget.”

Even while losing a strong group of seniors, the team looks poised to make a strong run again next year.

“Our team was extremely deep this year which bodes well for the future,” Novak said, “ I think our team has a good chance of winning again next year, and we are set up good for many years to follow.”