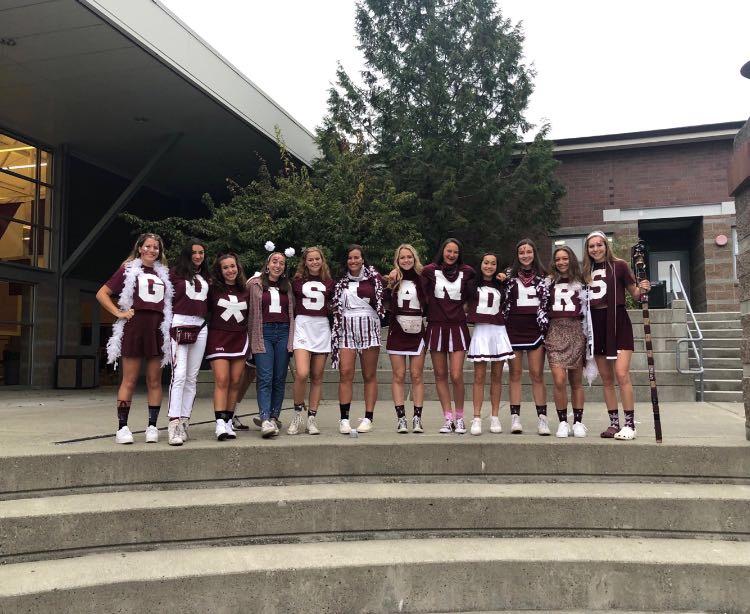 The following statement is a continuation of Islander Girl Audrey Wen’s reflection from the most recent print edition, The MIHS Culture Issue.

This year and in recent years, the “spirit groups” of MIHS have come under scrutiny, and for legitimate reasons.

As a freshman new to MISD, I remember walking into MIHS and being completely oblivious to the significance of what it meant to be an Islander Girl, Snail Pound member, or Flag Dude. At first, I only saw senior girls and boys decked in peculiar outfits: bowling jackets for the boys, letters for the girls, and some wielding tattered maroon and white flags.

I had input from many sources; my mother warned me to be cautious of these groups because of their bad reputation of drinking, partying and exclusivity. Some peers informed me that these people were members of the “popular group.” Others said they were acclaimed to be the most spirited.

Ultimately, I had to form my own judgement about these groups. Were these people a group of leaders who modeled spirit for their community? Or were they simply a group of partiers who commanded the school out of personally instituted social authority?

This question has been up for each of us to decide as members of the MIHS community. As a current Islander Girl, I’m here to provide my opinion from my personal experiences with these spirit groups the past four years, both as an outsider and as a member.

I think that within the MIHS community, there are numerous answers to the question, “what is the point of these spirit groups?”

Personally, as a freshman entering MIHS wanting to assimilate into high school culture, I did look up to the Islander Girls, Snail Pound, and Flag Dudes to demonstrate what it means to be “spirited.” This, I believe in essence is what I think is the most powerful aspect of these groups.  Now being a part of Islander Girls, I realize that these groups come with a responsibility of influencing younger students.

While these groups did indeed inspire me to be passionate about my school, they also seemed to encourage exclusive and rowdy behavior that I ultimately received as intimidating, rather than welcoming or communal

Everyone seems to have had differing experiences with these groups, however I think we can all agree that to some extent, they have affected our perception of MIHS culture.

When I became an upperclassman, I wanted to have that same power to shape the culture of my school. Honestly, I chose to overlook the poor reputation they had for the alluring social authority they seemed to command.

Despite this, I do not regret wanting to be nor choosing to be an Islander Girl. I think my perception of Islander Girls as having the agency to promote school spirit was perfectly valid.

Conversely, my understanding that the Islander Girls held toxic social command was equally as legitimate. This is where I reached my dilemma.

How could such a group foster a healthy and spirited school environment while possibly fitting both of these qualities? The answer, in my opinion, is that it simply can’t. Upon realizing this, I began to question the legitimacy of my position. Was being in Islander Girls even worth it?

When I first accepted my “letter” to become part of Islander Girls, I wore the letter ‘R’ with pride. I saw Islander Girls and the other spirit groups for their positive aspects: to lead the school in spirit, to organize Snail Gates and to encourage others to show their pride on spirit days.

I chose to disregard the negative social branding I knew came with the position, ignoring the assumptions that I may be perceived as exclusive, a partier, or someone who didn’t care about their grades. I believed that my positive attitude was sufficient in “debunking” the ugly stereotype of what it means to be an Islander Girl.

However, I didn’t take into consideration that my personal truth did not translate into other people’s perceptions of the collective Islander Girl group. Further, I realized by denying that our poor reputation pervaded school culture, I was doing a disservice to the “leadership” position I believed I held.

The Islander Girls group this year is very aware that our image has been under fire for some time. It is difficult to own a reputation that was not self-implemented. However, I believe it is an inherent responsibility among these controversial groups to acknowledge the damage that these lasting connotations have caused to MIHS culture.

We may not have created this poor reputation, but it is up to us to change it.

This is why I decided not to leave Islander Girls.

I am honored to be an Islander, in part because I feel such a sense of unity when I know that I share this pride with so many. I love my school, but I also know that growing up on an island in such an incubated environment has its negative repercussions.

If the Islander Girls position grants me the opportunity to create positive change in our school culture, I want to take it. Choosing to remain a member of these spirit groups, I am part of the problem, but I can also be an important part of the solution.