Winter Sports: What to Expect This Season 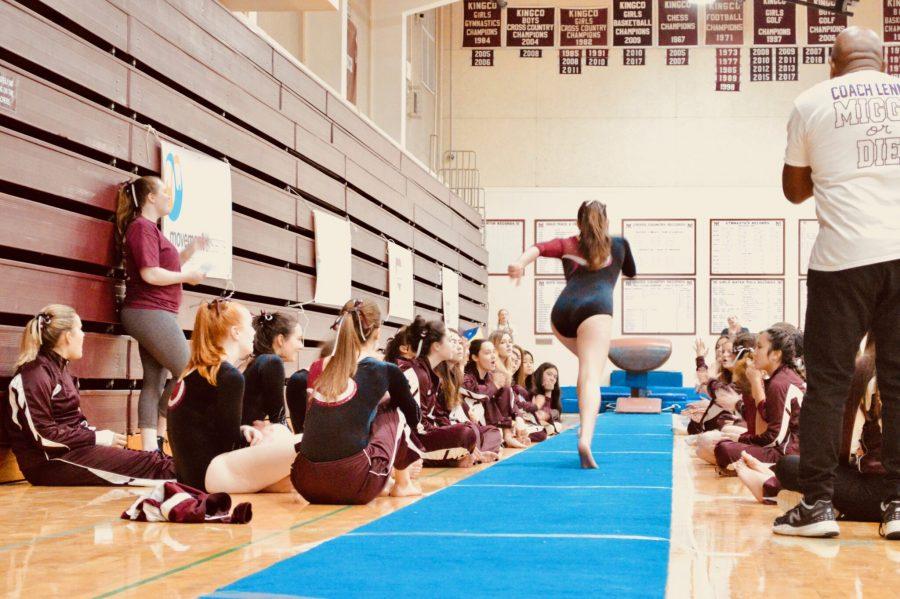 The gymnastics team cheers on a teammate at its first meet. Photo by Hannah Howison.

After an incredible season last year, finishing second at the State meet, Boys Swive is ready to capitalize off their roster’s potential this season. In addition to a strong upperclassman group, there is also a strong upcoming group of freshmen. “I think we are relatively well prepared as we have a lot of fast freshmen coming in, and with our seniors and juniors this year stepping up I think we have a bright future for the team ahead of us,” captain Oliver Schaaf said. One primary focus of the team will be to build a community, a trait that the team thinks can carry them to success.  “I think last year we had like some disconnect between club swimmers and kids who just swam high school,” Schaaf said, “So this year me and my fellow captains are trying to build a sense of community among the team.” With this added chemistry, the team should be poised for a deep postseason run.

Fresh off their KingCo title from last year, Mercer Island Boys Basketball seeks to build off of last year’s momentum and achievements this year. After retaining a decent amount of seniors for the season, one focus of the team will be to build a strong character. “The biggest thing is that we want to make a big impact, not only being good basketball players and winning KingCo or whatever it is, but being respectful,” senior Luke Wenzel said. With so many returning players and a strong chemistry, the team has aspirations beyond a KingCo title. “I think a lot of people have hyped up this season,” Wenzel said, “but you can’t take anything for granted you just gotta keep working every single day, since really anything can happen. So we’ll do our best to get to state. It’s just one step at a time.”

In the team’s second year in existence as a winter sport, the Ultimate Frisbee team looks to continue to build a solid foundation. “The big goal is to get people to come back,” head coach Larry Bencivengo said. “So if they play with us this winter, we want them to want to come back and play in the spring and next fall.” Since the program is still in its youth, the main priorities remain to recruit a strong collection of players that can keep the organization running through the coming year, which will mean recruiting more girls and underclassmen. With rising programs from Bellevue and Seattle, Ultimate Frisbee is bound to face heightened competition this year.

Mercer Island Gymnastics is ready for strong season this year. They strive to improve from last year’s mediocre performance, while building a strong team environment along the way. “We made it to KingCo [last year], but we didn’t make it as a team, only certain individuals got to go,” captain Ashley Joseph said. “But it’s still really fun and we’re excited for the season.” The team has many different tactics for how they can perform better this season. “We’ve been doing some more conditioning,” Joseph said. “And we’ve also got most of our girls to focus on all the events, rather than just one event at a time.” Through lots of encouragement, goal-setting and spirit, the team should be in great shape.

After a disappointing season, Mercer Island Girls Basketball is ready to start this season fresh with a new coaching staff. With a new staff, the team hopes that they can help guide them to success this season. “I think that [the new coaching staff] is going to be really good, and I think we can definitely expect an improvement from last year,” senior Mattie Lee said. Although the team lost a fair amount of seniors from last year, they managed to retain a large portion of their members that should help significantly. “We’re missing a lot of our graduated seniors, which is really sad, but I think this year will be better than last year,” Lee said. Overall, with their  new blood, the team demonstrates potential to prosper this season.

Even though the MIHS Wrestling team lost a fair amount of talented seniors last year, they are ready to make a statement this year. “It’ll be an interesting feeling going into this season without that group [of seniors],” junior Connor Pettigrew said. “Once we get through the first few weeks, shake off the dust, and we start getting into the real wrestling season, we’re going to have a strong team.” Wrestling may seem like a very individual sport, but the team is trying their best to include as much camaraderie as possible. “When you’re out on the mat and you’re facing against that one guy, it’s very one-on-one,” Pettigrew said. “But when you’re working and improving, you’re with a team, so practices are more of a team experience than meets.” Through a love for the sport and a love for fellow teammates, the team will enjoy showing other schools what they are made of.