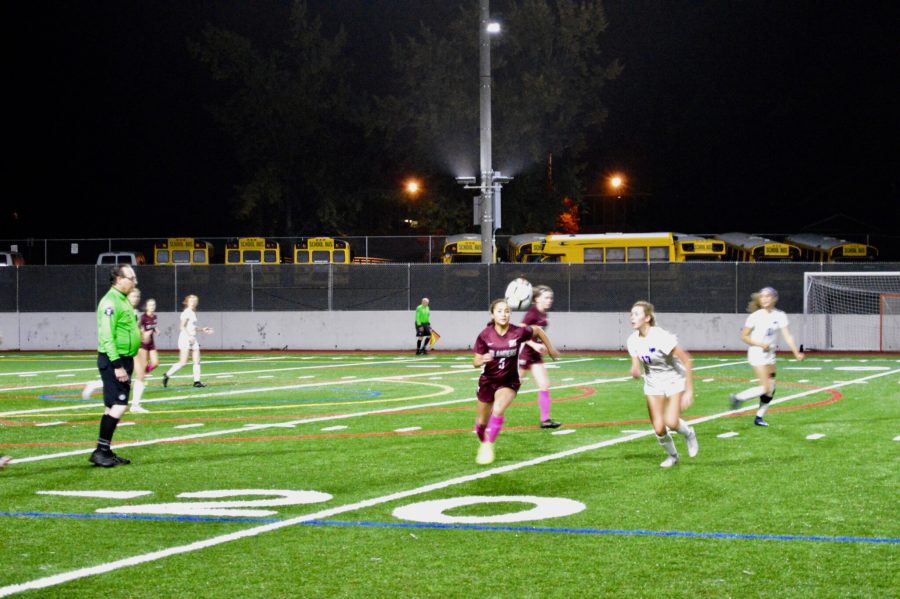 For Mercer Island, the game was all about defense, as the majority of their plays were preventative rather than offensive.

“In order to improve, we need to lock down on defense and not let in all those header goals,” captain Emily Yang said.

In terms of offense, Mercer Island struggled to get the ball downfield without facing interception. There were several instances where the team managed to get a shot at the goal, but missed it by mere inches.

“[The] last time we played Lake Washington, we lost 6-0,” Yang said. “This time I think it was a few unfortunate goals and there’s obviously a lot to work on, but everyone’s been improving in their positions.”

Yang herself managed to get a promising shot on goal, but Lake Washington’s goalie managed to tip the ball out just before it entered the net, making for another excruciatingly close miss.

By the end of the first half, Lake Washington had already scored three goals, but the Islanders had not lost their fighting drive. The team was noticeably more communicative in the second half, which allowed their offense to get more attempts at a goal.

“I thought we really improved in the second half,” goalie Amy Braman said. “I would say that we definitely played one of our best halves of the season.”

Though disappointed about the outcome of the game, Braman was proud of how the team played and adapted as the game went on. She, along with the team, is very optimistic for the rest of the season.

With a few adjustments, the team seems to have a real chance at achieving these victories and reclaiming the end of their season.