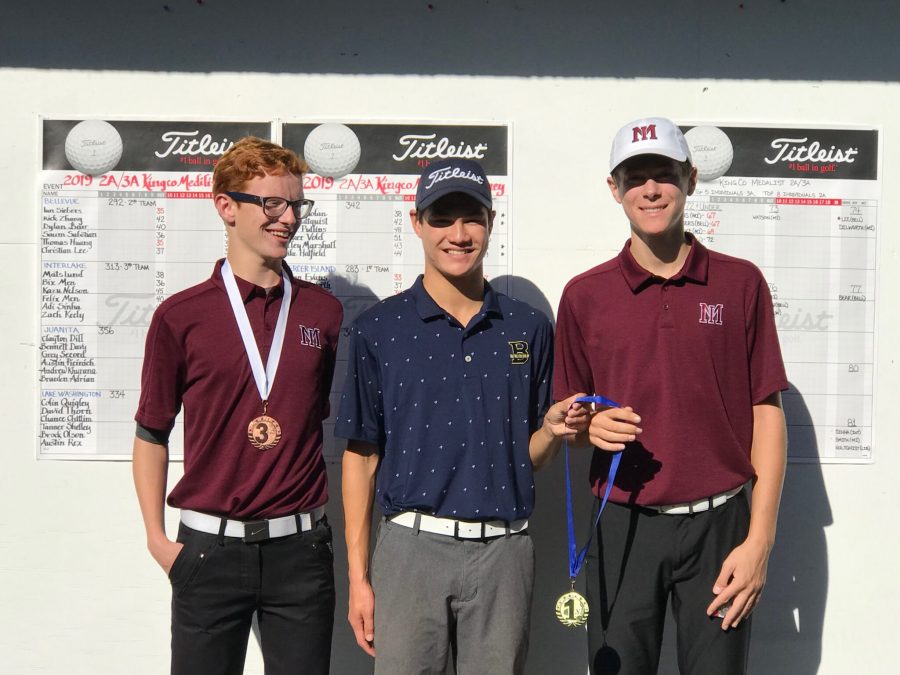 Gierke, Siebers and Evans (left to right) are awarded for their outstanding performances.

The MIHS Golf team left the crowd in awe Monday, Oct. 14, winning the KingCo Championship Tournament by an impressive margin.

The team’s final score of five shots under par not only broke the school’s previous record, but demolished Bellevue’s score of four over par.

“Our golf team is very good, but the defending state champion from last year is Bellevue,” head golf coach Tyson Peters said. “To beat them was very exciting for the guys because it validated all of our hard work, and it validated that we could be the possible state champion team.”

Beating Bellevue was a significant feat, given that Mercer Island lost to them twice during the regular season.

While the team played well as a whole, there were several standout individual performances as well. Sophomore golf prodigy Ethan Evans tied for first place in the competition, and junior Camden Gierke placed third.

After receiving their medals, Evans and Gierke celebrate with their team.

“It was a really fun tournament, and it was good to see my whole team play well,” Evans said.

Even though Mercer Island won the tournament, there were incredible golfers all across the board, such as the other first place individual, Ian Siebers.

“To play with one of my best friends [Siebers] who is a great player from Bellevue, and to tie for the medalist honors was really cool,” Evans said.

The team, along with Mr. Peters, has very high hopes for the upcoming Districts and State tournaments, as they currently hold the number one seed.

“If we play as well as we did, it will be very hard for anybody to beat us,” Peters said.