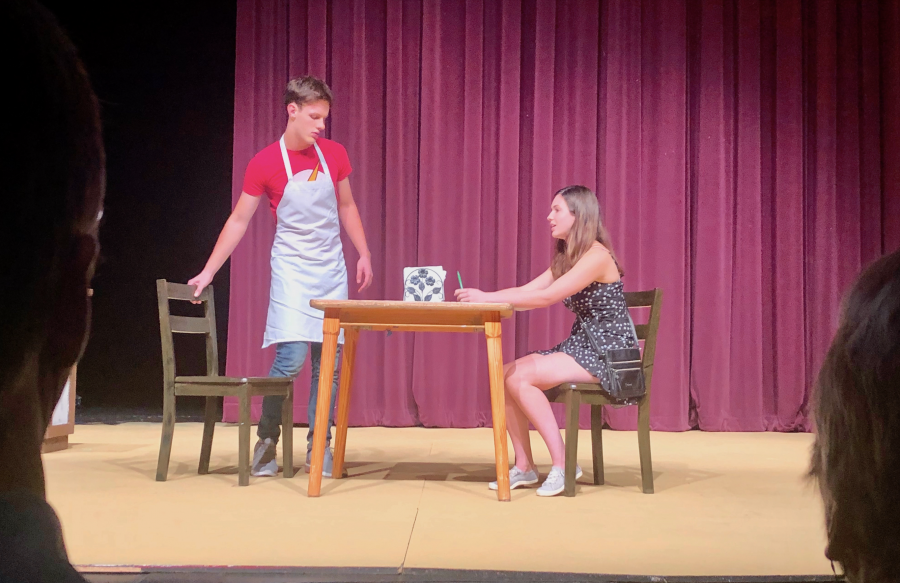 Dowdy, playing Matt in "Every Friday at Noon," approaches his crush Chris, played by Gabby Potts.

MIHS Drama II performed short plays written by students on Oct. 15 for an audience of peers, parents, and community members. Here is a short run-down of the performances, their plot lines and important takeaways.

Every Friday at Noon

The plot line: Alternating between her past and present self, an older Chris, played by Kate Petersen recalls the events of the previous summer when she fawned over the junior-class stud, Danny, played by Jack Swartz. In the flashback, a younger Chris, played by Gabby Potts, waits at “Pags” every Friday throughout the summer after a drugged-up Danny asked her out on the last day of school, saying they should meet for pizza on “Friday.” After many weeks of writing in her notebook in the restaurant, Chris begins to bond with the quirky waiter, Matt, played by Jamisen Dowdy. The two develop a close friendship within their weekly routine, until it is disrupted when Danny finally shows up. Proving to be a jerk, Danny mistakes Chris for a waitress, blows her off, disses her on the phone in front of her, and asks another girl out. Chris is heartbroken and does not return to “Pags” until weeks later. Reunited with Matt, Chris has the confidence to confront Danny when he comes in with another girl, played by Ellesse Kropp. After a brief interaction, Chris promptly pours Diet Coke over Danny’s head, as does his date. Encouraged by her brave act, Chris asks out Matt. Ten months and 11 days in the future, Chris and Matt are about to head out on a date.

Highlights: Each actor or actress brought their own personality to their character, resulting in a quirky, heart-warming and comedic performance. Among our favorite moments: Matt using his broom as a lightsaber and falling over in surprise when he realizes Chris is watching, Danny angrily demanding a towel after being drenched in Diet Coke and the girl camaraderie of Danny’s date joining in on Chris’s Diet Coke revenge.

Comments: This short play struck home for many in the audience who have experienced dating disasters. We all have imagined finding the perfect person in the place we least expect it, perhaps even at a pizza joint.

The plot line: Teenager Sasha played by Katharine Gregory internally struggles to gain control over her “demons,” the disparaging thoughts driving her crazy. The devil, played by Maria Reyes, represented the self-deprecating thought spirals that Sasha cannot escape. The angel, played by Kendall Baebler, tries to pick a broken Sasha off the ground and give her hope, confidence and love. The devil always wins. Sasha struggles through daily life until she finally faces her demons and stands up to the bully in her head. For a while, Sasha believes the devil is dead and she faces life with new vigor. Although the devil returns at the end of the play, Sasha no longer fears her devil because she is in control.

Highlights: “Things don’t just get better, you have to make them better.” Gregory put on an emotional performance that held the audience captive.

Comments: As highschoolers who often struggle with self-doubt, this story struck a chord. Sasha’s story reminds us all that we have control and can face our demons with enough courage.

The plot line: Former PTA mom Angie, played by Sophia Dondisch, is taking her daughter on a camping trip with her best friend. The catch: the friend’s mom, Becky, played by Ally Kropp, kicked Angie off the PTA and the two have a hotly contested rivalry. After a mom-showdown in the aisles of Trader Joe’s, Angie and her daughter Carlie, played by Brielle Gradek, head to the woods with Becky and her daughter Mikaela, played by Melissa Haist. As night falls, the characters struggle to settle in, forgetting supplies in the car, startling over slugs, and losing their marshmallows to a fiendish racoon. As the kids fall asleep, the moms begin to discuss their fractured relationship. Becky reveals that Angie’s best friend Tammy was actually at fault for Angie’s removal from the PTA. The two make up, both having missed each other’s company. Becky had actually told Mikaela to invite Angie and Carlie just so that the moms could make up. Overall, the weekend was a success.

Highlights: Kropp’s chorus of “‘ew”s as she navigates the outdoors left the audience laughing. The witty banter between the characters, including the all-too-memorable line “that woman is the cilantro of people,” stood out.

For the Hell of It

The plot line: The play opens to two high school girls in the car snapping at each other. The two had drill tryouts later that day but had to run an errand first. The lighthearted mood quickly shifted when the driver Chloe, played by Caroline Tanzer, pulled over so her friend Dee, played by Caroline Thompson, could drug the girl in the trunk who had woken up. Dee struggles to find the drugs while Chloe yells at her to speed up before the passing cop car notices them. After knocking the girl out, Chloe and Dee continue on to a meadow, where they tie up the girl, Ava, played by Ellesse Kropp. Dee, who thinks this is all a prank, begins to hallucinate after Chloe reveals her intention to kill Ava. Drowned with guilt, Dee begs Chloe not to follow through on her plans, which were motivated by the satanic-cult book she found on her doorstep. Despite Dee’s pleas, Chloe stabs Ava repeatedly, hoping that the sacrifice will grant her a wish. The next scene shows the traumatized girls at drill tryouts, struggling to comprehend Ava’s death.

Highlights: Both Tanzer and Thompson put on a compelling performance, bringing us on stage with them and making the audience invested in the characters and their actions.

Comments: The story left the audience extremely confused in the best way possible. The tone shift came by complete surprise, and the intense scenes kept us completely hooked.

The plot line: Tom, played by Max Cathey-Roberts, is interviewing as a chef at Bigbig Burger in Alaska. He is briefed by restaurant-owner Martie, played by Max Fischel, and cashier Beth, played by London Brunelle. Beth reveals in secrecy that she has stayed on staff for over 20 years because she is in love with Martie. Tom encourages her to come clean, and Martie panics because well-known, infamous restaurant reviewer Jean, played by Artemis Wiegand, is coming to review the restaurant and he has never given a good review. Jean arrives and unexpectedly orders everything on the menu. While Beth struggles to get Martie’s attention, Tom is thrown in at the deep end with milk burger grilling. After receiving poor feedback on the shake and fries, presented early as an appetizer, Tom is pressured to perform and completes the ten burgers in record time. To everyone’s surprise, Jean loves the burgers and Tom is hired. Beth finally reveals her love to Martie.

Highlights: This play was filled with hilarious moments: Tom nervously insinuates that he eats bags during his interview and then proceeds to eat bags in stressful situations for the rest of the story, Beth tries to profess her love for Martie backed by cheesy soundtracks in increasingly dramatic fashion and Jean has an all-too-believable French accent that gives the character a unique flare.

Comments: This story was the perfect wrap-up to the evening with a charming plotline that left the audience with warm and fuzzy feelings.