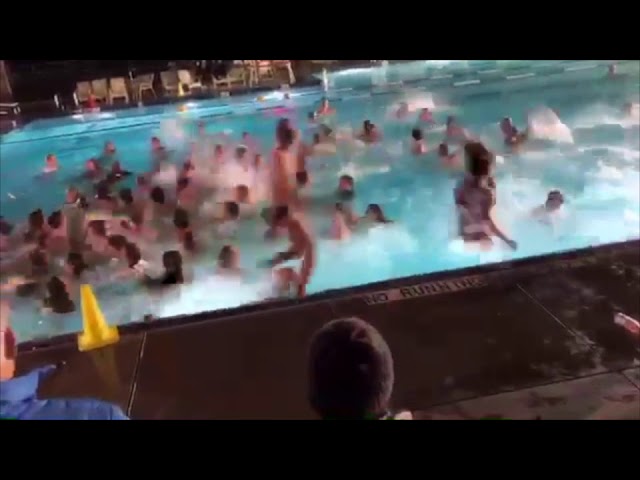 The Islander asked Oliver Schaaf, one of the senior water polo captains, to write a reflection on “Storm the Pool,” the biggest game of the season against rival team Bellevue.

My name is Oliver Schaaf and I am a proud senior captain of the MIHS Boys Water Polo team.

Water polo has been one of the most influential and positive high school communities I have been a part of during my high school years.

The “Storm the Pool” night against Bellevue every year is something that all water polo players anticipate. We hang hundreds of posters around the school and urge students to go on Facebook in anticipation of the game.

“Storm the Pool” is a tradition that embodies the spirit of Mercer Island Water Polo. Every year at our home game against Bellevue, our major rival, around 100 spirited MIHS students jump into the pool after the game, win or lose.

Our fans didn’t disappoint this year. As we walked out on the deck, our fans chanted “Mercer Island” at the top of their lungs, filling the Country Club with enthusiasm.

During the first quarter, we quickly went up 5-0 with Max Vacca scoring our first two goals of the game and Finn Friedland quickly scoring three more. By the end of the first quarter, the team was extremely excited, screaming at each other and keeping the energy at an all-time high.

However we as entered the second quarter, Bellevue quickly scored three goals on us and made us realize the game was not over.

We rallied and battled back ending the second quarter 10-6. Max Vacca scored another three goals and Finn Friedland and I both scored.

At half, we were all a little unsettled as we were expecting to blow Bellevue out of the water. Our coach rallied us together.

“You guys are making mistakes and are playing down to their level. Play your best and focus on yourselves,” Coach Calvin White said. “Don’t worry about the other team. Worry about yourselves.”

As we pushed off for the third quarter, we had our game faces on, making crisp passes and successfully helping on defense. During the quarter, Max Vacca and Torger Peterson scored two goals each, and I ended the quarter by scoring. The score was 15-7.

During the time out, I encouraged my teammates to finish strong.

Up by eight goals, we only had to prevent them from scoring. Bellevue tried to feed the ball to their star, Tej Singh on every possession, so we quickly adjusted by having some of our stronger defenders hound him.

When the buzzer sounded, the scoreboard confirmed an 18-10 MIHS victory. The crowd was poised to storm the pool.

We players were all bursting with joy and pride, ready to join our fans for a victory romp. “Hold on, hold on. We need to shake hands!” Jacob Swerland, the other senior captain, and I said to our team. We shook hands with the Bellevue players after a hard-fought game.

Of course, as a team, we know we have a lot of work to do heading into the post-season and our San Diego travel tournament.  But are feeling strong and confident as we continue our 2019 campaign.

Either way, that game was a perfect storm.