Girls Soccer Falls to 1-1 After Loss to Sammamish 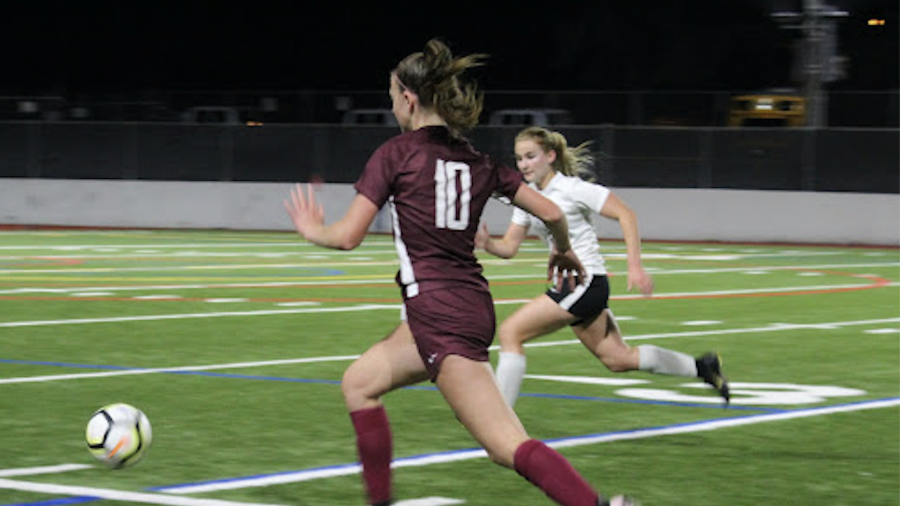 Sophomore Audrey Kris races past a defender as she drives the ball downfield. Photo by Alex Levin.

For most of the game, it seemed as though every time the Islanders took a step forward, they took a step back.

“A goal of the captains’ this year is to be passing more and connecting more as a team, so in that regard I think we did well,” captain Emily Yang said. “But as [our] coaches said, we do need to score.”

While the team did not end up putting any points on the board, they came incredibly close on numerous occasions.

Yang, as well as many other players, had several different opportunities to score while sprinting down the field in the second half. However, the team’s lack of communication in combination with Sammamish’s tight defense defeated their chances of coming back.

“We’re pretty new with each other, and we’re not really used to how each other runs yet,” Yang added.

While Mercer Island did allow a goal, they did not seem to struggle much defensively.

“Our defense has been solid all season,” Yang said. “Amy [Braman] has had some amazing saves, I think the goal was kind of a fluke.”

Braman has certainly been creating a highlight reel for herself. Adding on to her game-winning save last week, she blocked a goal towards the end of the second half in an even more miraculous fashion.

As the ball came towards her, she leaped as high as she could and barely got her fingers on it. She tried to tip the ball up and over the goal, but it came back down and would have made it in had she not grabbed onto it beforehand. The save inspired a wild cheer from the crowd.

The team clearly has to work on communication to get ready for their next matchup, but sitting at 1-1, there is still plenty of reason to be excited and hopeful.