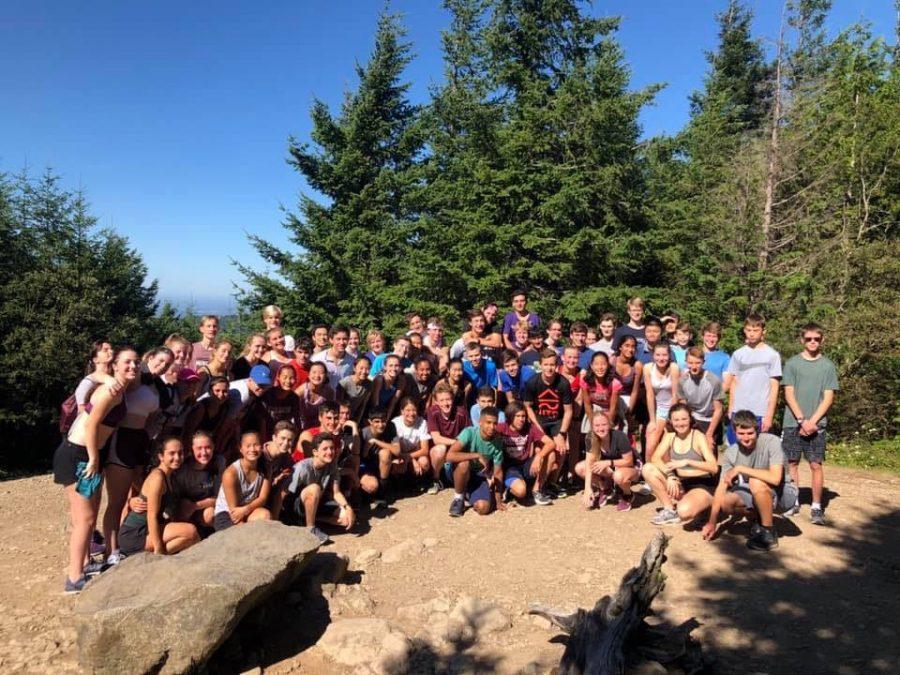 The cross country team poses for a picture on Tiger Mountain after a group run.

After a respectable season last year, the Cross Country team has an optimistic outlook on the upcoming season. Despite losing a few talented senior runners, including one of last year’s two state competitors, the team is determined to travel far into the postseason. “I actually think we are stronger than we were last year,” head coach Susan Empey said. “Our summer practices have been really well attended, which will definitely help us start the season fitter and stronger than we have in the past.” While the MIXC program boasts an outstanding strength in numbers, along with a tight-knit sense of camaraderie, there is always room for improvement. “With running especially, consistency is the key” Empey added. “The strongest XC runners are those who run really consistently, and the more we move in that direction, the better we will be.” If this persistent group of runners can put in the effort and tie up a few loose ends, they should have no trouble at all flying past their competition this season.

After losing the final three games of last season and missing the playoffs, the MIHS Football team is primed to come back better and stronger than before. With a particularly balanced roster, the Islanders hope to win more games this season, especially their matchup against Bellevue. “This season, I think our team has the potential to be just as competitive as last year’s team, if not more,” junior center/defensive tackle Derek Osman said. A weakness the team may be facing this season is that many talented, reliable players graduated last year, which now leaves holes to fill in their absence. “It is important for us to find new people to step up and fill their shoes,” Osman said. “However, I’m positive that we can do it and I am already seeing it happen in practice.” With the playoffs in mind, the Islanders hope to go, fight and win as best they can this season.

Sporting an overall strong season last year, the Girls Swim and Dive team is in a great position to improve this year. After the departure of head coach Evan Moline, the team now looks to former MIHS swim coach Chauntelle Johnson to lead the way. “With [Johnson] as our new head coach, we are very grateful to have her experience under our belts,” captain Grace Olsen said. “[We’ll] see how much better we can perform at dual meets, and eventually the state meet.” As well as a talented roster, the team possesses a common cheerful attitude between it’s players. “The team has such a great energy,” Olsen said. “[Our] encouragement and positivity inspires others to exceed their potential, which is something you don’t see in every team.” With hard work and determination, the Girls Swive team should be able to improve times and get the results they want by the postseason.

Fresh off a doubles state victory last year, Mercer Island Boys Tennis is hungry for another opportunity this year. With a strong group of underclassmen this season, the team will be relying on them to help improve on last year’s performance. We have a bunch of motivated, talented freshmen coming in who will be a key part of our success,” captain Alex Patel said. Outside of their doubles team title last year, the team was disappointed in how they finished. “The team is unhappy with the results from last year, so we are going to be looking for a strong comeback this season,” Patel said. This sense of disappointment should be a driving factor this season.

After a major shift in coaching and staff personnel, the Mercer Island Volleyball team looks to solidify their team chemistry this year. With six returning players and seven new players on the roster, the team is poised for an exciting season. “We have strong player leadership on the team which sets a positive example for the underclassmen,” captain Quinn Casey said. “The entire volleyball program has a great work ethic which will translate to our games.”

With a third place finish at State last year, the Boys Golf team hopes to keep up the incredible levels of competitiveness this season. Boasting a remarkably talented roster, the team has the goal of “winning it all” in mind. “We have the returning state champion Ethan Evans, along with a handful of other players that have a great chance at [helping us win] the State Championship,” head coach Tyson Peters said. The team had one of their most intriguing tryouts this year, making the golfers all that more ambitious to compete. “We are looking forward to a great season,” Peters said. “We look to be in the running hopefully for a Kingco, a District and the State Championship if we play our best.”

After a somewhat disappointing season last year, the Water Polo team is hungry for more. The players are looking forward to putting their previous mediocre state finish behind them by surpassing it by a wide margin. “This year, we are definitely looking to come back stronger than last year” captain Oliver Schaaf said. “We have a lot of new players who are bringing a lot of potential to the team.” The team’s stellar communication between players both in and out of the pool should serve them well as they face tough competitors, such as Bellevue. “We hope that throughout the year, we can improve as a team, allowing us to succeed all together,” Schaaf said. Whether they are in the pool or not, the team is sure to make a splash this season.

After continuing to build off the momentum of their state title in 2017, Girls Soccer performed extremely well last season and managed to win KingCo and reach state quarterfinals. Heading into this year, Mercer Island lost 15 seniors from last year’s team, and now they will look to count on rising JV players to replicate their success from the past couple of years. “Every player has the same goal and ability to succeed, but it will definitely take some adjusting with a new team dynamic,” captain Emily Yang said. Although the team enjoys good chemistry, the roster’s youth might be a potential weakness. “It will definitely be a challenge at first for some new players to adjust to playing varsity, since high school soccer is such a physical game,” Yang said. “However, I think everyone is up for that change and it will just take time to adapt.”

Band is the largest group in the school, and it is one that provides community for its members and the school. “The purpose of the band is to bring together a huge group of kids to pursue a singular goal and through that, create a sense of community and belonging for everyone involved,” drum major Jasper Geer. Led and organized by three drum majors, band puts on performances at football games, basketball games, and other venues throughout the year. Fresh off a Rose Parade performance, the band leaders are looking to build off last year’s momentum. “This year, the band is going to focus on consolidating what we have and preserving the focus and excellence we had last year,” Geer said. “The band is going to become even more inclusive than ever before and become even more motivated to do their best.”

Gender Equality Club dedicates its time at MIHS that focuses more on social justice and political issues regarding gender equality in the local community and around the world. “Our club is important because gender inequality affects everyone,” president Emily Yang said. “We believe it is important to use our place on Mercer Island to both speak about issues in our community and on a larger scale.” Last year, the club managed to help fundraise for girls in developing countries and hopes to continue to do this for the upcoming year. Daily activities for the club include anything from learning about the history of feminism and current social movements to attending marches and fundraisers. “People should join because we love hearing new opinions and discussing topics that might be new to members,” Yang said. “GEC is a great way to meet other students in other grades and make a difference in our community.”

SAFE: S.A.F.E. Club makes it their duty to try and promote unimpaired driving as much as possible. Meeting about every two weeks, the club not only makes posters, hands out pamphlets, and holds lunchtime campaigns, but has a fun time doing it. “We know that it’s impossible to ask high schoolers to stop drinking completely,” club president Polly Schaps said. “So we just urge people that if they do drink, to not get behind the wheel.” While the message of the club may seem simple, it is also incredibly important. “With so many kids drinking and going out, it’s imperative that they understand the danger of getting behind the wheel impaired” Schaps said. By joining this low-commitment, service-oriented club, you would not only be helping the livelihood of the club itself, but helping spread a message that almost anyone can get behind.

In the club’s second year of existence, Asian Collective will continue to strive to preserve and explore Asian culture in and around the Mercer Island community. “We want to be a platform for Asian Americans to discover and celebrate their cultural uniqueness,” club president Wesley Ho said. “Overall, [Asian Collective] strives to make people proud of their own distinct cultural backgrounds and aware of the cultural diversity around them.” For those interested, the club organizes a variety of weekly activities. Every month has a new theme and country that is assigned to it, which includes playing games, eating snacks, and learning about the country of the month. Regardless of your background, Asian Collective welcomes you. “If you want to participate in fun group events, enjoy delicious food, earn service hours, or just like to learn about different cultures, Asian Collective is for you,” Ho said.

If you are wanting to explore your creative side, you may consider joining Art Club. Art club is an excellent opportunity for anyone to work on a project or craft of their choosing, along with other people who share the same interest. “Our club is important, especially for the arts community, because we provide opportunities for people to try a variety of art projects that might be difficult to try outside of school,” club president Claire Cheung said. For anyone with artistic ability, consider looking at Art Club.