The MIHS Islander • May 26, 2019 • https://mihsislander.org/5589/features/mercer-island-girls-lacrosse-celebrates-their-first-title/ 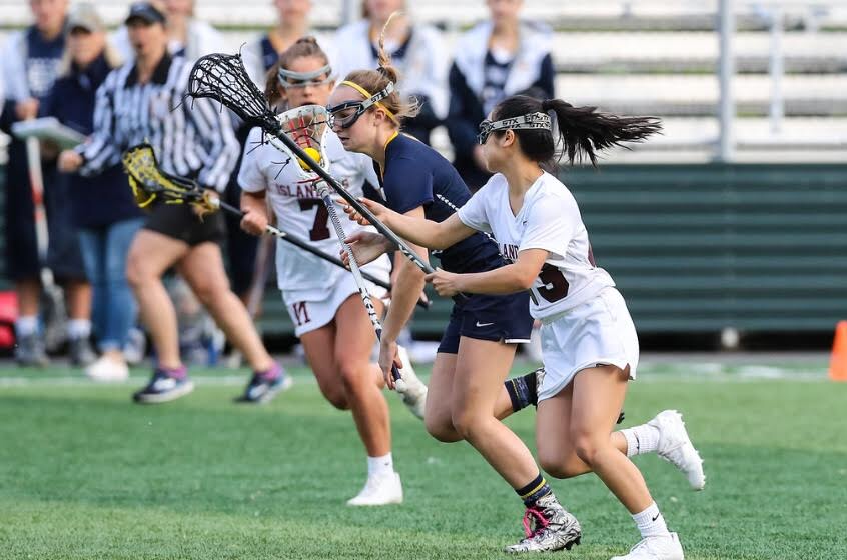 After suffering a heartbreaking loss in the state championship last year, Mercer Island Girls Lacrosse is celebrating their first ever championship title after the 2019 season.

In last year’s state title game, Mercer Island lost 10-9 to Bainbridge, just one goal away from seizing their first state crown. However, this loss only fueled the motivation for this year.

Coming into this year, the team was extremely dedicated to improving their chemistry and teamwork, which proved to be extremely critical for them in their success.

“I think we’re way closer this year because we lost so many seniors, it’s more of an underclassmen team, and that just brought us all closer,” junior Polly Schaps said. “We all had different roles that we had to play, and we didn’t just rely on a couple of people.”

With new and young roster, Mercer Island made sure to ensure they had a well-rounded team that depended on every single member of their roster.

One of the team’s first key games was against Bainbridge, who defeated them in last year’s championship. Bainbridge, historically, has caused Mercer Island to struggle, so a victory against them would be integral for their morale.

“We were going into that game, and it was kind of a grudge match because they beat us less than a couple months prior,” team captain Ellie Sulla said.

Although the team suffered a large hit by losing nine seniors from last season, the Islanders were able to come through and crush Bainbridge 11-4.

“That was going into spring break, so that got everyone super hyped up too to come back and start playing again,” team captain Julia Nordstrom said.

Mercer Island maintained this momentum for the remainder of the season, finishing undefeated with an impressive 16-0 record. The team started the postseason by defeating Holy Names, Issaquah and Snohomish to receive another spot in the state championship against, yet again, Bainbridge.

The team the day spent the day before prioritizing defense, something that played off in the end.

The Islanders struggled early on in the championship, being down as much as three goals at one point. However, Mercer Island kept their morale high.

“I think our energy was super good after every goal,” Schaps said. “We got so excited, hyped, and we didn’t let things get to us if we made mistakes, so we kept going.”

After coming back to tie the game up at 9-9 in the last few minutes of the game, sophomore Emma Brodsky, who would later win game MVP, scored a go-ahead goal with 29 seconds remaining to lead the Islanders to victory 10-9, the same score that they lost by the previous season.

“Since the game was so close for the last five minutes, we did not get that feeling that we were going to win,” Sulla said.

Heading the next year, the team continues to look strong and holds great potential.

“We are losing a lot on our defense [because of our seniors], I think our attack unit is still strong, we’ve been training defense a lot this year,” Schaps said.

With now having their first title in their team history, Mercer Island will only continue to grow stronger in the coming years as their youthful team grows more experienced and talented, and it will be exciting to see where their potential takes them next season.