The MIHS Islander • May 21, 2019 • https://mihsislander.org/5566/humor/nextdoor-calls-for-public-execution-of-ding-dong-ditcher/ 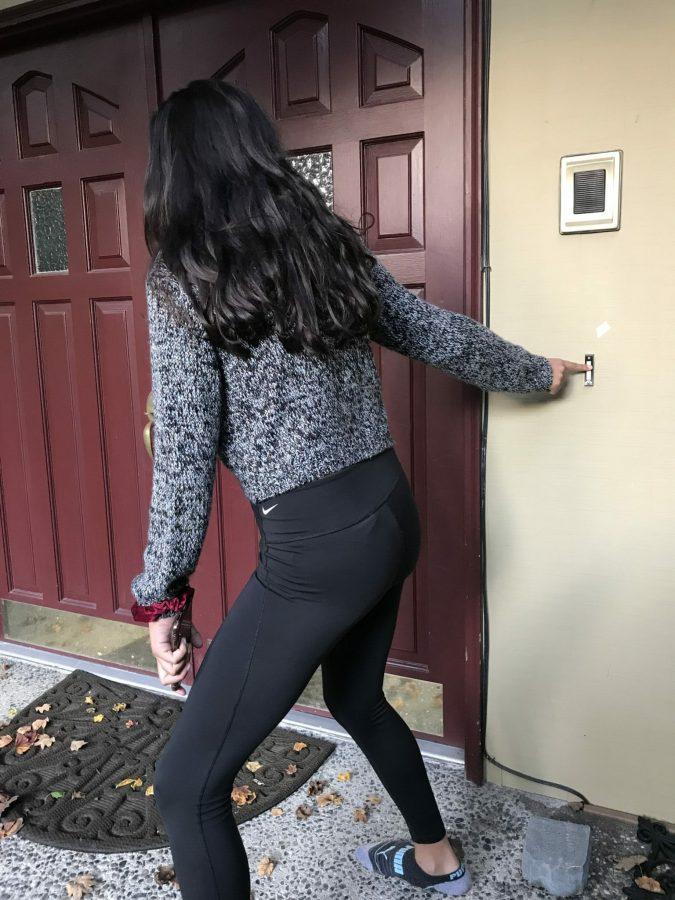 After the identity of a “Ding-dong-ditcher” was revealed on NextDoor, dozens of users have begun calling for the public execution of the culprit.

For Erica Leighy, age 57, it was just another normal Friday night.

“I had just finished my quinoa salad, and I was about to settle in to watch the new Property Brothers,” Leighy said.

At approximately 7:15 p.m. Leighy heard a knock at her door. She went to answer it, but no one was there.

“I knew right away that whoever did this would pay with their life,” she explained.

Her post read as follows: “I believe there are a few kids going around the street ringing doorbells in Mercerdale, they are not quiet about it, I caught one on camera. They are driving an older Ranger Rover on 34th Place. Hoping someone can identify so their parents can be spoken to. Thanks”.

Despite her initial run on sentence and misidentification of the company Range Rover, her post gained significant traction.

“He should be locked up in big-boy prison!” Marcus Mireby commented.

“I’d like to see his hands cut off,” Jennifer Langston commented.

The ditcher’s real nail in the coffin came from local Cafe owner Nicole Goodwin: “If this awful little child pest is not publicly exterminated I will withdraw my company’s funding for city use.”

City Council is still deliberating but the initial polling does not look good for whoever was driving the Ranger Rover.

After reviewing Leighy’s security footage, the culprit was identified as Justin Sandsky.

“My older brother was hanging out with his friends, and my mom made them let me tag along. I knew I gotta impress them [sic]. One of them got this litty [sic] idea that I should ding-dong-ditch this lady who gives out raisins on Halloween. I rang her bell and ran away. Like I absolutely nae nae’d [sic?] this hag, you know? I just… I just never expected this reaction from the community,” Sandsky said.

Unfortunately for Sandsky, without Goodwin’s funding, the city will have to cut events like Summer Celebration and the Easter Egg hunt. The blame has fallen squarely on him.

“Once that lady got my name out on NextDoor it was like my life was over. I couldn’t go to school, my friends wouldn’t talk to me and my house got egged. And now they’re calling for my death?! I’m 14! I haven’t even kissed anyone yet and I’ve been practicing so hard. Wait, don’t put that in.”

An appeal trial was granted to Sandsky on April 30, during which he gave the following statement: “What I did was wrong, yes. I apologize deeply to Mrs. Leighy and all involved. But ladies and gentlemen of the jury, imagine a world where we’re all judged by the content of our character when we are 14. Martin Luther King said that. So I’m asking, aforementioned ladies and gentlemen of the jury for not only your forgiveness but for your understanding. Thank you.”

Even though he misquoted MLK and was not speaking to a jury, the majority of City Council seemed moved by Sandsky’s flawed, yet genuine speech. However, NextDoor remains adamant and continues to use levy bailout funds as incentive for City Council to expedite the execution.

With the deadline in two days, Sandsky is justifiably terrified. He remains in his room most days, texting old friends to no avail, watching movies, alone, for hours on end.

Sandsky’s plea fell on powerless ears. NextDoor made its snap judgment, and, at the risk of losing Summer Celebration, the Mercer Island community is sticking with the judicial system of the bored and elderly.