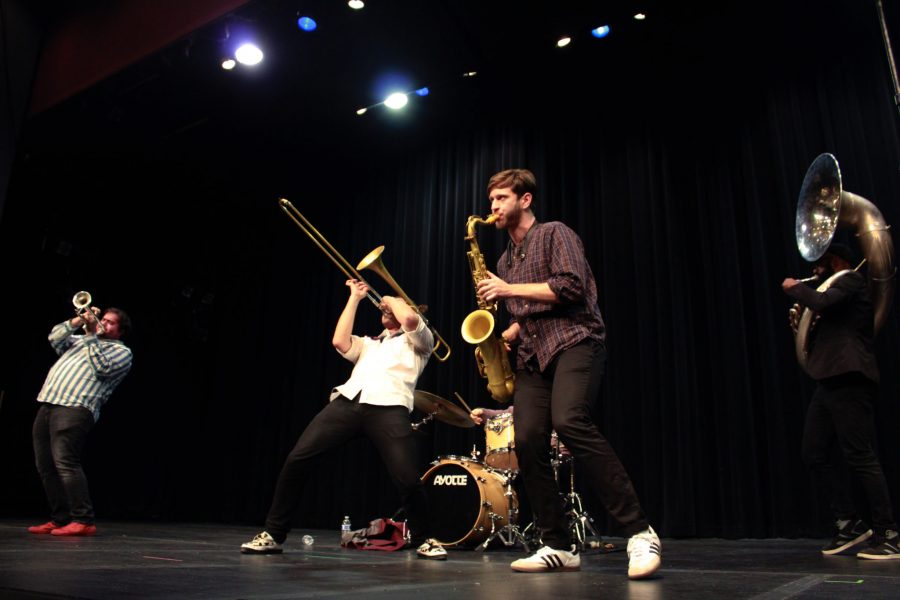 During fifth period Thursday, March 21, the popular brass band Lucky Chops stopped by Mercer Island High School to put on a show like no other.  While not everyone was able to attend the concert, I was lucky enough to get the chance, and I am sure glad I did.

I was absolutely blown away by their performance, as was everyone else watching.

Made up of a trombone player, a saxophonist, a trumpet player, a sousaphone player, and a drummer, Lucky Chops delivered a variety of high-energy, electrifying songs, each one more entertaining than the last.

It was clear that the band members knew how to keep the audience on their feet, as their mix of lively pop covers and thrilling original songs had the audience in a never-ending loop of cheering, clapping and shimmying along to the beat.

Each member played at least one solo, which I thought truly showcased how talented the musicians were. As a saxophone player, I was thoroughly impressed with what they were able to do with their instruments.

Aside from the music, what I loved about the performance was how interactive they were with the audience. They showed that they value educating others about music just as much as performing.

For example, at one point they invited students Justin Lesko and Jack Price to join them onstage and play alongside them.

“We love music a lot,” trombone player Josh Holcomb said. “So we want to go to schools and inspire other students to potentially have the same experiences that we’ve been lucky to have.”

About half way through the performance, Holcomb gave a little speech about how he started Lucky Chops, and why students shouldn’t be afraid to do the same thing.

“If you have a crazy dream that you want to pursue, go for it,” Holcomb said. “Because if we can make this insanely bizarre dream come true, you can [too].”

I am fascinated by how Lucky Chops is still doing exactly what they did in high school, and now they are traveling around the world playing on tours. It just shows that if you have talent, energy, and an instrument, anything can happen.

Want to check out some of Lucky Chops’ music? Subscribe to their Youtube channel at https://www.youtube.com/channel/UCYfFuHmTC6-i43qoYmXckbQ for their music videos.